DESERT STORM AMERICAN SOLDIER CONFESSES HE WAS ORDERED TO BURN OIL WELLS in Kuwait! HE and his MEN DID the PRANKS that SADDAM GOT BLAMED FOR! 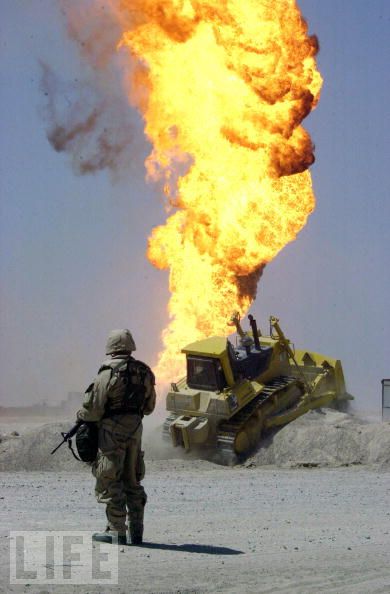 Remember those oil wells on fire in Kuwait? In the first Iraq war, at the very end of it, when Iraquis saw they were losing and WE KNEW we were winning and we needed to make them LOOK REALLY BAD?  GI's burnt those oil wells up! Those were our oil wells by that time, as we'd won the war. They were our pillage. Didn't belong to Saddam anymore! So when they burnt up, everybody thought Saddam was pissing on us. Well guess what, OUR GI's were told to set them on fire! EVERYONE LIED at the TIME. The propaganda attempt would be ruined when the real GI's who did it went on Public Radio and admitted what they'd been told to destroy. What a story!  We were paying outrageous prices for gasoline and SADDAM was supposedly burning it up? A total "HATE PIECE" designed to make you let BUSH do war. Like that other lie on how IRAQUIS pulled infants out of incubators and threw them on the floor. Think CBS will cover the TRUTH?? Fox-NEWS? On Cable? Dream on!

Just how much do your leaders lie to media and thru the obedient talking head puppies, to you? Adolph Hitler said, "make the lies big enough, everybody will believe them." Last night, (I WROTE THIS IN 2003)  anyone tuned into KPFK on their computer/s speakers, a CALIFORNIA station but one you'd have heard in RUSSIA if you had a PC.... listeners. heard a G.I. confess what his squadron was told to do. Set fire to alot of oil wells during Desert Storm.

The fact that Bush Sr. LIED to you should not surprise you. Hitler's own Gestapo was hired to run our CIA and has since 1945 when BUSH SR was an OSS/ CIA agent.  Reinhard Gehlen himself was instructor in a CIA course that all Alan Dulles' propaganda geniues, special op and deathsquad operatives had to take! His best student GENERAL CABELL was in on the JFK HIT (his brother was then MAYOR OF DALLAS. Another German Graduate was Ted Shackley of PHOENIX PROGRAM, (U.S. death squads) in Vietnam, a regular ONE MAN GESTAPO  for the CIA / USA ---who murdered Progressive Vietnamese like they were rats on a corn field. So the correct answer to the LYING question is, YOUR GOV lies like a RUG.  Remember, this GOV is not AMERICAN in nature, not Jeffersonian. Not moral or true. It is GERMAN. KRAUT! NAZI. NOT American. Hitler admirers are currently IN POWER. Since the day they killed JFK in a coup and put JOHNSON in power. See Nazi Spy George Morenschildt on the WHO KILLED JFK page.  THE US INTELLIGENCE servers pulled GERMANS over here, lying down with dogs thinking that the Nazis had all the goods on the Ruski commies needed in Cold War, and they got up with fleas. RACISM, GENOCIDAL capacities, EXPENDIBILITY of small groups, for PROPAGANDA purposes, the explanation of why they killed all the KENNEDYS JOE JUNIOR, RFK, TEDDY in a sense and last JOHN JOHN and his wife... and then, they let 911 happen.

FEB 20, '03, all of LOS ANGELES found out the kind of propaganda tricks THE USA WILL DO. An American Special Operations soldier was interviewed on L.A's FM radio station, KPFK, 90.7 FM. He came forward of his own free will and accord, and was not paid for the interview. He stated that he was part of a group of U.S. Special Ops forces, operating on specific orders, who were the ones who ignited the oil wellhead fires in Kuwait, in order that THE WORLD would blame Saddam Hussein for the horrendous fires.

This G.I's specific assignment was to start fires at four wellheads, while each of the other soldiers in his group were assigned a similar number of fires to start. He further stated that no one from Iraq had anything whatsoever to do with the oil well fires in Kuwait. There were numerous additional details, adequate to show that this particular soldier had not made up any part of his story.

L.A's KPFK -FM is part of the nationwide PACIFICA radio system that you can get right now on your PC! http://www.pacifica.org/  Fab shows, caviar radio for fried egg prices! Try FREE!

These FM stations and the chains that supply them with material are public supported with fund drives where L.A. pours forth the cash, millions on each fund drive. Their employees are all screamin' radicals who volunteer their time. Nobody loses a job if they go to far, so THEY GO TOO FAR! NO VESTED interest. So these employees freely thumb their noses at GM, FORD and carry all the RALPH NADER interviews the guy does! They spit on G.E, WESTINGHOUSE and have all the anti-NUKE WAR TOY - HELEN CALDICOTT interviews you could want in a lifetime. They spit on POST and KELLOGS and KNUDSEN CREAMERY and carry shows by Gary Null that would make you switch to raw oats before you'd eat another packaged cereal!!

As you can imagine, no commercials on the. None are needed. No corporation owns their butt. Where the dollar isn't SOUL IS! Where the mind isn't SPIRIT IS!

So make a vow to capture its signal! ON YOUR PC! YES! Catch Radio PACIFICA in your area by hook or crook. On the radio in the kitchen, makes a great delight and you can happily wash a stack of dishes soaking in your local station. In L.A it's  90.7 FM, but whole PACIFICA chain of stations can be listened to across the nation, (outside the station's signal area) using Real Audio on the internet -- go to http://KPFK.org or search on radio pacifica at http://www.pacifica.org/
and grab their cybersignal.. READ http://www.masterjules.net/radio.htm for all the shows you can get o your PC that tell the truth.

Why I bring this up is that no Cable channel on TV will ever give you that kind of  PROPAGANDA FREE veracity.

I AM NO TEKKIE. But I figured out how to download the REAL PLAYER cuz the station's webpage made it so easy! So you want to go to any radio station online, download REAL PLAYER in five minutes flat, and then tune into NET RADIO! Many to chose from. I adore http://www.C-SPAN.org as its book shows are fab, the greatest historians, authors. The Patricia Cornwell Jack the Ripper Caught show was amazing! It's still available there online as an archive show. Then, http://www.radio.villagevoice.com is great, lots of music, https://tunein.com/radio/Village-Voice-p434119/  features New Yorkish Kulture and this station is about to join with LOS ANGELES FREE PRESS and make its return, so you want to keep au courant with that. You can be surfing, answering email and writing files and multi-tasking, all the while listening to the real skivvy from NYC and LA stuff you can never get elsewhere. It's a good thing.

Our POSTER is ANITA SANDS HERNANDEZ, Los Angeles Writer, Mother of 4 and career Astrologer. Catch up with her websites  TRUTHS GOV WILL HIDE & NEVER TELL YOU, also The  FUTURE, WHAT'S COMIN' AT YA! FRUGAL LIFE STYLE TIPS,  HOW TO SURVIVE the COMING GREAT DEPRESSION, and Secrets of Nature, HOLISTIC, AFFORDABLE HEALING. Also ARTISANRY FOR EXPORT, EARN EUROS....* Anita is at astrology@earthlink.net ). Get a 35$ natal horoscope "my money/future life" reading now + copy horoscope as a Gif file graphic! No smarter, more accurate destiny reading out there!

<===BACK TO THE ACTIVISM INDEX PAGE

<=== INVESTIGATE DOING DRIP IRRIGATE- LINES for MEGA MONEY A YEAR. EVEN YOUR POTHEAD NEPHEW COULD DO IT!

<==== BACK TO THE SHOW BUSINESS  ARCHIVE (for wannabe directors, writers, producers, videographers)

<====HOW TO TINKER WITH OTHER PEOPLE's BRAINS for 100$ the hr. just call it TANTRUM YOGA