Donald Trump and HOLOCAUST that the New World Order REQUIRES of him. 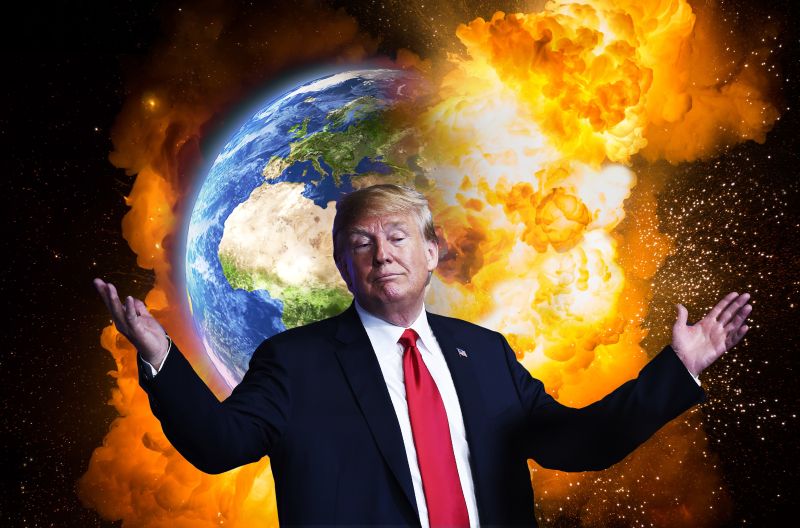 AMERICANS SEEM to REALIZE FINALLY that there is some kind of PERVERSE DEEP STATE. PURSUING ENDLESS WAR!!! And SOME OZ LIKE FIGURE behind a curtain has absolutely NO PROBLEM with bombs raining down on AMERICAN CITIES. THE CREATURE pursues endless war, daring RUSSIA, IRAN, ANGRY MUSLIMS and ROCKETMAN KIM to do something about it. ENDLESS WARS, LATELY, in SYRIA, IRAQ, YEMEN AND SOON IRAN. OCCASIONALLY WE CATCH SIGHT of the ERMINE and PURPLE ROBES of some pretty sneaky gadzillionaires who CONTROL all our PRESIDENTS, so that the MILITARY is allowed to bomb babies, civilians, homes and families abroad  so that their children die in bloody pieces or starving to death.

THESE SAME POLICY MAKING BILLIONAIRES BOMB OUR own FAMILIES with ENDLESS ESCLAVITUDE AND NO UPWARD MOBILITY due to this ENDLESS RECESSION produced by ENDLESS WAR.  We see the Bushes, Clinton, Obama now TRUMP following orders and we ASK "WHO IS RUNNING THESE POLS?"

ANSWER: YOU DID, you voted in PATSIES, not declared anti-war LIBERALS. You led by the 13 FAMILIES. Think NOT? TRUMP'S GRAND FATHER WORKED FOR THE ROCKEFELLER FAMILY ALL HIS LIFE. The ROCKS were the guys who stole TESLA's discoveries.

JUST GOOGLE THOSE WORDS, TRUMP AND ROCKEFELLER. PLENTY of files on this theme. GIGBILLIONAIRES STEAL INVENTIONS, LIVES and they also do NOT WANT the POOR to have PUBLIC AID. THEY PRETEND TO BE CHARITABLE but it is posturing. They INVITE KOREAN KIM to BOMB American cities and get rid of the SERFS, the HOARDS.

The late DAVID ROCKEFELLER CRIED "YOU BAD ACTIVISTS, ALWAYS BLAMING US RICH GUYS! WOE is ME!  POOR ME!"


For more than a century ideological extremists at either end of the political spectrum have seized upon well-publicized incidents ... to attack the Rockefeller family for the inordinate influence they claim we wield over American political and over economic institutions. Some even believe we are part of a secret cabal working against the best interests of the United States, characterizing my family and me as ‘internationalists’ and of conspiring with others around the world to build a more integrated global political and economic structure – one world, if you will. If that’s the charge, I stand guilty, and I am proud of it.
—David Rockefeller, Memoirs, Random House, New York, 2002, page 405  NOT ONE WORD WAS TRUE. PRIVATELY they worked thru POLS LIKE TRUMP and CEOS like TRUMP'S GRANDFATHER TO STEAL, PROFITEER and TERMINATE AID & ENTITLEMENTS ENTIRELY.

NEXT WE ARE GOING TO READ UP on all the Conspiracies that this ‘secret cabal’ ---the 13 FAMILIES ARE BEHIND.
I PUT MANY OF THESE at THE EMPIRE INDEX.


RK MOORE "There are many unfounded conspiracy theories, and there are also some very real conspiracies at high levels, like the one Rockefeller is bragging about – the project to create a new kind of world order. (THIRTEEN VERY WEALTHY FAMILIES including Rothchilds and Rocks and their chums MEET REGULARLY with the LITTLE GUYS, like AMERICAN PRESIDENTS and INSIDER POLS and the IMF/ FED officials, TO PLOT THEIR "TO DO LIST" each year.)

This is a project that has been going on, as Rockefeller says, for more than a century, involving planning and organizing on a vast scale, including the orchestration of two World Wars. We are now in the final stages, the endgame, of that project, and many of the globalist institutions – the proto world government – are already in place.
I’ll be saying more about the history of the project, about the nature of the envisioned new order, and about how the orchestrated Trump Episode will result in a major step forward for this globalist agenda. But first we need to understand how such a project is even possible, how coherent plans on such a scale can be made and carried out – in what seems to be a complex, pluralistic world with many divergent forces at work.
The ‘secret cabal’ that Rockefeller refers to is made up of the central-banking dynasties, which essentially means the families and close connections of the Rothschilds and the Rockefellers. The direct power of this cabal is immense. With their central banks they control the finances of nations and the fates of economies. And over the centuries the Rothschilds, and later the Rockefellers, have found ways to extend their power in indirect ways.

" Some of the biggest men in the United States are afraid of something. They know there is a power somewhere, so organised, so subtle, so watchful, so interlocked, so complete, so pervasive that they had better not speak above their breath when they speak in condemnation of it."
– Woodrow Wilson

Wilson himself is an example of this indirect power. He was an unknown university professor when he was approached with an offer he didn’t refuse. He’d be launched into the Presidency by a well-financed campaign if he’d agree, when the time came, to sign legislation to create a Federal Reserve bank. Thus, in 1913, was the USA brought under the central bank system (ENGLISH HEAD BANK) and under the control of the dynasties. A momentous result was achieved by cultivating an agent, and placing him into a position of political power. AND BOY DID HE REGRET IT LATER. HE KNEW he'd BEEN HAD! Our POSTER is ANITA SANDS HERNANDEZ, Los Angeles Writer, Futurist, RESEARCHER, mother of 4 and career Astrologer. Catch up with her websites  TRUTHS GOV WILL HIDE & NEVER TELL YOU, also The  FUTURE, WHAT'S COMIN' AT YA! FRUGAL LIFE STYLE TIPS,  HOW TO SURVIVE the COMING GREAT DEPRESSION, and Secrets of Nature, HOLISTIC, AFFORDABLE HEALING. Also ARTISANRY FOR EXPORT, EARN EUROS....* Anita is at astrology@earthlink.net ). Get a 15$ natal horoscope "my money/future life" reading now + copy horoscope as a Gif file graphic! No smarter, more accurate career reading out there!

<===BACK TO THE REALITY 101 SEMINAR FOR EMPTY POCKET TEENS

<==== BACK TO THE SHOW BUSINESS  ARCHIVE for wannabe writers, producers, video documentarians, MAKE IT FROM ANY CITY !

<====HOW TO TINKER WITH OTHER PEOPLE's BRAINS, call it TANTRUM YOGA and make $, NO COLLEGE REQ'D, NO A.M.A. PROBLEM

<===BACK GLIDE YOURSELVES AROUND TAXES -- TIPS AND WISDOM

<==== BACK TO THE NATIONAL SECRETS BOUGHT MEDIA WON'T REVEAL, AN INDEX PAGE.