Plots vs. plotting, vs. The Art of Plotting

Roget's Thesaurus calls a plot a lot more than just 'a plot'. 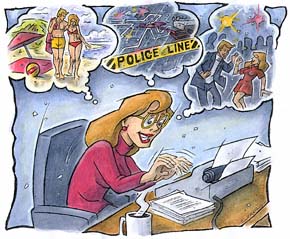 ALL OF THESE WORDS detail elements, features of the art of plotting. What that THESAURUS doesn't tell us is HOW YOU MUST TURN YOUR BRAIN on its head to come up with all those gears! BRAINS are notoriously linear. They tell what they know and move best going from A to B to C, USING OLD EXPERIENCES, ROTE AND MEMORY.

BUT A GOOD PLOT is organic, spiral, like life when she builds things, oddly mathematical, seeming to understand action and reaction or karma and will have rogue elements or surprises, depending on most minute variances, like the characters and their whims, vices, vagaries. THEN the changes that they GO THROUGH. Salt that with some serendipity, lucky chance and you have the mysterious world of Plot.

Basically, the writer has to WADE INTO the story staying in an intuitive mode, no feet on the ground, but swimming with the currents...to come up with these items. They aren't MIND-generated, they are whiffs of inspiration, empathy, insight, supra knowledge that the sensitive plotter will smell in the air.

The great ones do not leave instruction booklets for writers of the future on how they did their magic! If you can google up one send it to me! Me, I'm asking HOW the DICKENS did Charles come up with SIDNEY CARTON starting a rogue and in the end going to the gallows instead of letting his friends be caught and killed?

He may have planned the character arc this way: "I will start with a supremely safe and cold Englishman who is observing the HORRORS of the French Revolution dispassionately." Dickens knew he wanted to get into that story terrain. So he  set up this elegant gentleman who was basically selfish and somewhere along the road, Dickens was receptive to the transformative surprises that occurred to him. And well, he was Dickens so he knew that they'd occur, that his unconscious would come up with something.

SO HOW can we NON-DICKENS types plan an authorly  surprise for our characters? We can in the sense that we create a story arc with a BUM in the first scene, and let him play around with the other characters until we see an avenue that leads to his being a winner. Kind of like that new Wil Smith film where he's homeless then becomes a multi millionaire. That is beyond imagination, so it had to be a real life story.

We believe that we cannot come up with stories like that. We believe that Minds can't do that kind of amazing tracking a story line, then fleshing out the characters you've chosen, then on top of it, selecting a lot of amazing and telling events and then finding a transformation point.A pretty girl.

YOUR mind no matter how clever it is, probably could not sketch out that SKELETON right off the bat. But hey, it doesn't have to. You have a soulular, etheric sixth sense called E.S.P. which is the key to day dreaming, so that you can visit HUNCH LAND wide awake.  ESP is extra-mind. Even your mind doesn't know how strong that is in you already, you were pre-loaded at the factory, as Minds only know Minds. Take time to do one short exercise with pen and paper, and you'll see how the heart and soul can summon up amazing muses and ghosts which will be there every time. No lighting up a doobie. No skull fractures required. The land of imagination will become so familiar to you that you can close your eyes and put your hand on the doorknob any time you want.

See, you've already had daily practice since birth. You called it DREAMING. Your own mind projector and just this one specialized side of the mind, the yin brain, generated some pretty wild dreams quite reliably and when you were esconsed in one,  you didn't plan what was going to happen. It came from the OTHER SIDE. HOW can you get into a dream state while you're wide awake in a comfy chair with a EASY SCRIBBLE IN BOLD TYPE PEN in hand?THE PENTEL ENERGEL does not dry out like a bold marker. AND IT IS BOLD so you can scribble with your eyes closed and still be legible.


The exercise is to get into that chair with those props. Then what. Deep breathe. There are a lot of things that knock out the rational brain. Booze, drugs, sleep, skull fracture. Leaping off a bldg. or Deep, slow breathing

How TO WRITE A Film Script or a Novel.

1.) CHANNEL THE PLOT. AVOID THE BRAIN.  Your THIRD EYE with its master, the SOUL, will help you if you ask nicely. SIT SOMEWHERE PEACEFUL and ASK YOUR UNCONSCIOUS TO SHOW YOU the movie that IT wants to make. Don't make any decisions about what or where. Just shut your eyes, go into reverie and wait until you SEE a VISION,until it's like a TV SHOW FROM THE OTHER SIDE> Maybe you see some NOVEL character, see what they are doing. Maybe it's an oddball character. You are allowed to say to your unconscious, "Dear Soul give me a character who'd be a wonderful comic-tragedy movie and be useful to humans who'd see it in a movie house."

So you sit and just say that you see a homeless bum; it's MEL GIBSON. Scribble a note on a 3x5 card to jog memory later. BUM.  Just scribble it, don't waste time spelling, just notes. This is called MAKING YOUR CARDS. So your first card might say this is about a guy down on his luck. A big star, sexy but grimy.

Go back into an alpha wave, mindless reverie. Use yoga to slow breath to 3 breaths a minute which is really spacey. Now, ask your unconscious to SHOW you the action of that first scene. Example: You 'see' a 'Yuppie girl at office, bored with the effeminate men around her, whom she rejects. She goes to laundry and sees this hunk only after a second she realizes that he's a HOMELESS bum. She gives him her bag lunch. Always give two lovers a "Meet-cute". Apparently he only has the clothes on his back. She volunteers to wash them for him. Happy comedy movie. Obviously. Cuz he wears a cardboard box while she washes his stuff.

Now that this script has struck your fancy! Stick with it, making the 'cards', scene by scene, roughly indicating the conversation that goes down. We don't need more now. Go as far as you can. IF YOU GET STUCK you tell your INNER EYE, "BUT WHAT SHE DOESN'T KNOW IS..." Or "WHAT HE DOESN't KNOW IS..." Of another stimulant to the mind ... "AND THEN?" Billy Wilder used that SYSTEM. If you get tired, leave it to another day, after your dream-unconscious works on it, then go back.

Stick with cards until you have whole story, movie is finished. You, who never knew you were a story teller had this fabulous whole tale IN you. That's the miracle of working out of your unconscious. It is not derivative, it is utterly FRESH.AND IT NEVER CANNOT BE STIMULATED.Or it always CAN BE.

Now what other movies are in your unconscious? Well, go down there. Don't stay up in your head. Shut your eyes, and let a big bubble rise from the bottom of the river of your unconscious. If you are truly spaced out, as when you're DREAMING AT NIGHT, it will kick in. Usually the vision comes as a visual daydream. Or as a 1st scene. You 'see it.' Like a t.v screen in the inner eye. So don't 'think' it, that's YANG brain. SEE it, receive it, that's YIN BRAIN. But Scribble notes cuz this stuff vaporizes like perfume.

That bum in laundromat may be the 1st scene of your movie. Just go from there, and keep on asking your uncon. "and then?" So it supplies more plot. More visual scenes. Whenever you can create 'the plot thickening' by urging unconscious to come up with more, saying 'and then?' Billy Wilder taught that.

If you are writing comedy, keep saying to yourself 'only what he don't know is' or 'what she don't know is,' (Billy Wilder's trick for writing hilarious comedies.) Not every time, at every intersection is there a 'what he don't know' but when you get a peach, it'll be full of wit and irony.

You can keep on creating 'high concepts' or you can go ahead & not stop until you have a whole movie, with a whole plot. 2 hrs. worth. Your imagination is a wondrous weaver, much more than your brain. It will spin like a spider, unbelievable intricacies. You will be amazed. Try several more movie plots. Then pick the best. That will be the first screenplay you'll invest time in. Maybe with help of a Hollywood agent, you'll sell it. Maybe it's just practice. It doesn't matter. We all start somewhere. I have only reminded you of how it is that you contact your muses. That live link is another thing, to show you that there are other systems.

Our 'POSTER-BLOGGER' is ANITA SANDS HERNANDEZ, Los Angeles Writer, Researcher,  mother of 4 and a career Astrologer. Catch up with her websites TRUTHS GOV WILL HIDE & NEVER TELL YOU, also The  FUTURE, WHAT'S COMIN' AT YA! FRUGAL LIFE STYLE TIPS,  HOW TO SURVIVE the COMING GREAT DEPRESSION, and Secrets of Nature, HOLISTIC, AFFORDABLE HEALING. Also ARTISANRY FOR EXPORT, EARN EUROS....* Anita is at astrology@earthlink.net ). Get a 35$  natal horoscope "my money/future life" reading now + copy horoscope as a Gif file graphic! No smarter reading out there anywhere.


<====BACK TO THE OLIGARCH EMPIRE ARCHIVE ( YOU GOTTA TRACK TO ATTACK)

<====BACK TO THE GREATEST METAPHYSICS TEACHER AND HIS RUTHLESS RULES, "THE BOOK"

<=== BACK TO SCREEN WRITING, NOVEL WRITING, the BIG $$ AND PRODUCING FILMS AND MAKING DOCUMENTARIES. TIPS.

<=== BACK TO THE FRUGAL INDEX PAGE - BUDGET BABIES LIVE LIKE KINGS

<===== BACK TO REJUVENATION 101 (POSTPONING AGING, ILLNESS and above all DEATH.)