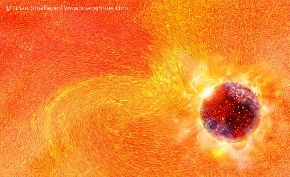 Helena Smith in Athens and Agencies
Wednesday July 25, 2007
The Guardian

Southern Europe sizzled in record-breaking temperatures yesterday with the
heatwave being blamed for deaths in Hungary and Romania, power cuts in
Macedonia and forest fires from Serbia to Greece.
Up to 500 people have died in Hungary because of the heatwave with deaths
attributed to heatstroke, cardiovascular problems and other illnesses
aggravated by high temperatures which reached a record high of 41.9C (107F)
in the southern city of Kiskunhalas.

Countries across the Balkan peninsula also laboured under temperatures that
hit a historic 43C in Belgrade and 44C in Bulgaria. In an urgent
announcement, Greece's weather service predicted temperatures of 45C (113F)
and the government urged people to restrict their movements and stay
indoors.

With blazes raging across much of the country for a third week, Athens'
public order minister said the region was "on a war footing". In Bosnia and
Macedonia, where temperatures shot up to 45C - the highest for 120 years -
governments declared a state of national emergency.

Romania said at least 12 people had succumbed to the temperatures, pushing
the death toll to 30 since June. Authorities said 19,000 people had been
admitted to hospital, mostly with respiratory problems. In Serbia,
volunteers joined firefighters and the army to help extinguish an estimated
50 blazes.

In Italy four people were burnt to death after a brush fire trapped hundreds
of tourists on beaches in the Puglia region. Emergency services used patrol
boats and helicopters to whisk 450 holidaymakers and residents off the
beaches to which they had rushed to try to escape the flames.

Two people were found dead in a car and two on a beach near the village of
Peschici, where the fire swept close to houses, forcing the evacuation of a
hotel and several campsites and tourist resorts.

The heatwave, which is not expected to ease until the end of the week, is
the region's second this year. Record temperatures in June have already
ensured this is the hottest summer in Greece for a century.

Their study is the first to find a "human fingerprint" in the rainfall
changes which have been detected in a belt of the northern hemisphere
stretching from the Mediterranean to the UK to Norway.

The results, based on a global comparison of weather records going back to
1925, suggest that levels of rainfall across the UK have increased steadily
by an average of 6.2 millimetres every decade. At least half of the extra
rainfall and possibly up to 85% is caused by the impact of greenhouse gas
emissions, the scientists conclude.

Our POSTER is ANITA SANDS HERNANDEZ, Los Angeles Writer,  MOTHER of 4 and career Astrologer. Catch up with her websites  TRUTHS GOV WILL HIDE & NEVER TELL YOU, also The  FUTURE, WHAT'S COMIN' AT YA! FRUGAL LIFE STYLE TIPS,  HOW TO SURVIVE the COMING GREAT DEPRESSION, and Secrets of Nature, HOLISTIC, AFFORDABLE HEALING. Also ARTISANRY FOR EXPORT, EARN EUROS... Anita is at astrology@earthlink.net ). Get a 35$ natal horoscope "my money/future life" reading now + copy horoscope as a Gif file graphic! No smarter, more accurate career reading out there!

<====HOW TO TINKER WITH OTHER PEOPLE's BRAINS for big $. Call it something UN-MEDICAL like "TANTRUM YOGA"

<=== BACK TO HOT IDEAS FOR MERCHANDISE!

<=== BACK TO THE CLIMATE SCANDALS INDEX PAGE