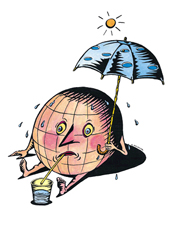 It has become apparent that human activities are affecting the environment at a global scale. Many activities such as burning fossil fuels in industry, the transformation of forests into agricultural land, the creation of artificial wetlands are releasing large amounts of so-called greenhouse gases into the atmosphere, especially carbon dioxide and methane. The gases trap the heat that is radiated from the Earth's surface, thus leading to a warming of the atmosphere. This is the Greenhouse Effect.

The Greenhouse Effect is a natural phenomenon. Without it life on Earth as we know it would not be possible. The average temperature on earth, at present +15°C, would be much lower, -19°C. The problem lies in the fact that emissions from human activities are increasing the amount of carbon dioxide and methane in the atmosphere resulting in an `enhancement' of the Greenhouse Effect and thus increased surface temperature. This is known as Global Warming. However, there are still many uncertainties, the role of the natural processes in oceans and in plants and soils on land that affect global climate, is not fully understood. Regional climate models have indicated that Global Warming will not be the same for every region in the world. While the average global temperature is expected to rise between 0.5°C and 4°C over the next 50 years, increases could be much more significant in the Arctic.

The annual precipitation in Finland is expected to increase by about 10-15%. The increasing temperature will enhance evaporation from the soil surface and probably transpiration from plants (Kettunen et al., 1987, Mitchell et al., 1990). Schneider and Rosenberg (1989) claim that an increase of 3C in temperature could enhance evapotranspiration up to about 20% compared to the current temperate conditions. Consequently, the amount of soil moisture available to plants could decrease up to about 20% from the current level in the temperate forest zone (Mitchell et al., 1990).

Other changes to be considered include the depletion of the ozone layer, an increase in contaminants and atmospheric dust, and the reduction in biodiversity of species of regional fauna.

Global warming may have an impact on the sea level oscillation. Coastal regions are particularly vulnerable in the short term. These are important areas for the development of activities for any society. Presently, two third of the world population is living in a zone of 100 km from the sea.

Although the rise in Mean Sea Level (MSL) is a universally recognised phenomenon, the extent of the process is extremely controversial. As a consequence of these uncertainties many different scenarios are available which converge in acknowledging a clear correlation, in the past 100 years, between atmospheric CO2 concentration and sea level. This provides some weight to the hypothesis that sea level rise not only exists but is also a consequence of the greenhouse effect (Carter, 1988, WWF, 1990).

The consensus is that sea level rise presents a common threat to both industrialised and developing countries. They urgently need to examine which of their activities are increasing their vulnerability to sea level rise and adopt measures to reduce that vulnerability.

In Brazil, sea level changes studies indicated the adverse impact on the mangrove forests and coral reefs. In other places in the world, with the expected higher levels, islands would disappear (Antilles in Middle America, or partially inundated such as Antigua, Kiribati-Tarawa, Moorrea, Nevis, Republic of the Maldivis, Republic of the Marshall Islands, Kingdom of Tonga etc.). Bangladesh, with its large mangrove forest (the Sundarbans) will be at risk due to any increase in sea level, and the impacts will not be restricted to the coastal zone. Because of its location on the delta of three of the worlds major rivers (the Ganges, Brahmaputra, and Meghna), Bangladesh suffers from river floods that can affect up to 65% of the country at one time. Ten percent of the country will be lost with a one meter rise in sea level (Report of the Coastal Zone Management Subgroup, IPCC, 1992).

In Europe, studies have indicated that due to the relative sea level rise the coast is changing. Along the Dutch coast losses of sand in the coastal zone are increasing, their wetlands being at risk. Furthermore, the Second Assessment Report from the Inter Governmental Panel on Climate Change (IPCC) used a number of scenarios of greenhouse gas emissions to indicate that a continental increase of temperature appears to be unavoidable in the coming centuries. As a consequence, the sea level will rise at an accelerated rate, and the possibility exists that wind and wave regime will change. The best estimate of the IPPC is that the sea level will rise by 50 cm over the coming century. This prediction is associated with a certain amount of uncertainty, the range lying between 15 and 95 cm (de Ruig and Hiller, 1996).

Global warming will not only cause significant environmental changes, the socio-economic environment will be influenced as well. For instance, the availability of fresh water will change, since the distribution of rainfall will change over the earth's surface and throughout the year. In some countries adaptations will be necessary as the local agricultural environment deteriorates.

It has been estimated that particularly in the Arctic, where the environment has typical features such as sea ice, permafrost and an Arctic tree line, may be seriously affected by warmer temperatures. For instance, in the Barents Sea area, the population has a varied source of livelihood, depending on fisheries, forestry, reindeer-herding and tourism will suffer from the impact.

World-wide climate change may cost millions of dollars if no measures are taken. Depending on locations in the world and the economic situation, this will run from 0.5% of the national income in Western Europe, to 16% in Southeast Asia. Therefore the Dutch Government has allocated 750 million guilders to combat the emission of carbon dioxide. Google around and see what the USA has allocated.

(this info collected but not written by me, a few weeks after the hottest summer on record, 2006,)  Anita Sands Hernandez at astrology @ earthlink.net

But a net savvy Brit researcher into all things conspiratorial wrote me:

There is no such thing as global warming as claimed by the liars and
myth-makers. Period of hot and cold are cyclical, and have been since
the Earth began; the cycles have varying lengths and durations. In the
mid-1950's we had a freezing period with a lot of snow during the
winter times. A couple of hundred years ago it was so cold that the
River Thames froze over and people ice skated and had parties on the
river; around ten thousand years ago there was a global cold period
that lasted a few hundred years. This was confirmed by the remains of
a large city off the coast of India: roadways and buildings about 10
miles into the sea from the current shoreline; it was also a period
when most of Europe was covered in ice; the biblical flood was the
result of the freeze cycle becoming the next warm cycle, (global
warming again), when the frozen seas started to melt, raising sea
levels, which was also the story behind Noah's Ark.
There are scientists claiming that we are about to have another
mini ice age. Who is right? The politicians are not!

There are two fundamental causes for the Earth's cold and hot cycles:
our star the Sun and solar winds, both of which are cyclical in
operation; and those cycles are of varying duration from as short as
to 25 thousand years or more.

Anita Sands Hernandez is found at astrology @ earthlink.net . Get a FREE natal horoscope "my money/future life" reading now + copy horoscope as a Gif file graphic! No smarter, more accurate career reading out there!

<===BACK TO MONEY SECRETS ONLY THE EXPERTS KNOW,better for JOBLESS TO KNOW THEM!

<=== BACK TO ENRON PLANET, the DOOMSDAY SCENARIO ALL CROOKED, CONNECTED CEOS FOLLOW!

<==== BACK TO THE "FIX YOUR FLAGGING AMBITION" SEMINAR

<====HOW TO TINKER WITH OTHER PEOPLE's BRAINS for big $, just don't call it therapy it's TANTRUM YOGA maybe

<===BEAUTIES, HOW TO MARRY A BILLIONAIRE AND SAVE THE WORLD WITH HIS MONEY

<=== HOW TO START AN INTERNAT'L CHARITY, SALARY YOURSELF AND/OR A RELATIVE TO RUN IT


<=== BACK TO HOW THE POOR MAN CAN BUY REAL ESTATE SEMINAR

COMMON CAUSE PUBLISHING RIGHTS to the writings and postings of ANITA SANDS HERNANDEZ,  7,000 ARTICLES GO TO YOU, FREE, TODAY, RIGHT NOW.  PERUSE THEM, CONTROL SAVE a big website's worth. THEN use FREE FTP SOFTWARE To load a website you get for 5$ a month and post articles that YOU LIKE,  My own and your own. Mine are free to you, even if you monetize them. YOU WILL ATTRACT AD REVENUE. DOOCE.COM LADY got 40k a MONTH FOR HER ADS,a MOMMY BLOG. Be someone who forwards the action, culture, education, NON-MSM facts and thru all that, evolution. IT IS getting better you know and by getting WORSE FIRST, it gets better!