THE SECURITY GUARD BUSINESS - a HALF BILLION A YEAR, at "AKAL SECURITY" 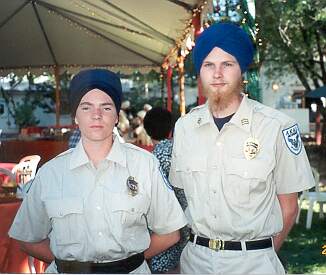 When I first met this certain young man, a vegan yoga student, devotee of my teacher Yogi Bhajan, he barely had the rent on his studio apartment but he was good at karate and martial arts ( with those wood sticks), a fit man, did yoga, was vegan. One day, his teacher, Yogi Bhajan told him, 'be my personal body guard.' Today that man earns a half billion a year. How did he do it? I hate to tell tales out of school, especially YOGA SCHOOL, but I know any young man could do this business in any big city of the world and do equally well. So, here's what the man did. This young fellow got a license to have a gun and he trained at precision shooting at one of those places you see in films, shooting ranges. He trained in karate. He traveled with Bhajan, this world famous GURU, who has Hindus chasing after him as they're angry he's betraying SIKHISM to teach an exotic variety of amazing yoga, the very radical and until then, very secret  KUNDALINI Yoga system to achieve superman powers but worse in Sikh eyes, the GURU makes Americans into SIKHS! Prayers, turban, the whole nine yards. Having a lot of GRINGOS suddenly bumping shoulders in their religion offended them at first--so, well he got attacked by a knife wielding Sikh assassin once. The way the PRESIDENT OF INDIA, Mrs. Gandhi died. An angry SIKH. But this Body guard foiled the attack. After a few years, this yogi told the boy, 'train others like yourself. I need a lot of guarding.' This he  did. After a few years more flying around the world with all these bodyguards, the boss said 'why  not open a security company?' Obedient to the last, the boy now a man opened AKAL SECURITY. He now has to train a few DOZEN other guys, and they all  take gun class, they get certified or bonded, gets their right to carry arm licenses  -- some thing with the state so they're cool. They rule. They know how to do security to the max. And what's more, people regard American sikhs as top of the line fellows. People recognize class.

NOW for God knows what reason, it occurs to the Young Man to test-pitch a big corporation, see if someone with moola won't hire the gang for building safety you know, walk around at night, open doors,  poke around, make sure all exits doors are totally locked. And watch over the wealth, secrets, technology and infrastructure of a big corporation. The first corporation they hit on signs up. HUGE HUGE MONEY. So now all the boys carry guns. These guards for the most part happen to dress in the SIKH traditional uniform, epaulettes, ceremonial dagger. White cotton jodhpurs. But later as the annual contract is in the six figures, the guards wear the outfit you see above, khakis sort of. .

And the thing grows, more corporations sign on, so now the boss brings in more boys, l8-30, mostly yoga students. He spots who has talent and who is fit and who is a tower of blubber and sends a few to karate school ..they all get standard training, learn to shoot, get bonded.  NOW he gets a girl yogi in the office. She is a secretary, another gal is bookkeeper cuz hey he has seven figures now in his bank acct. over a mil and he's only been open a few weeks. And he gets a SALESMAN. He trains him in the rap that got him those contracts. so that Now other people than HE are going to be approaching rich companies, selling the security service, the plan and factories, even the U.S. MILITARY hires them to guard bases. THE GREATEST BUSINESS IDEA. NY TIMES COVERED IT!                URL ABOVE ^

AKAL  made one half billion dollars in contracts in 2007. That is half of A THOUSAND MILLIONS. The one biz on the upswing in America is CRIME carrying the security business upward with it!
See: http://www.alternet.org/story/151946/rich_executives_spend_millions_for_bodyguards_to_guard_them_from_populist_anger?akid=7391.23746.sMcmyH&rd=1&t=2

One client sued the AKA GROUP as you will see if you google 'akal security ' in quotes. They got l8 mil in the settlement but if you have five hundred mil and have to give up l8 mil, no biggie. They alleged some of the boys weren't quite bonded, had been rushed thru training or something. The SIKHS could NOT PROVE that everybody was perfectly bonded and trained. The whistle blower kid who reported Akal got cash out of the whistleblowing, if that's what it is. That practice is called (in Latin, as legal terms are phrased,)  "QUI TAM' means WHO RATTED. That is the literal translation. Tam must be 'tell the man.' Qui is WHO. so it's WHO TOLD THE MAN got a huge % of the settlement money.

The point of that story is HOW quickly a little seed grew. And that if you had your druthers, that's the sentence the word to use, your 'I'd rather" I'd druther, you'd like to train a few hundred people to do that. Make yourself a billion dollars a year. CRIME IS on the uprise with this Recession. And whomever does this biz will make a lot of gun-toting boys very happy. I refer to the GUARDS not the criminals!

Our POSTER is ANITA SANDS HERNANDEZ, Los Angeles researcher, mother of 4 and career Astrologer. Catch up with her websites  TRUTHS GOV WILL HIDE & NEVER TELL YOU, also The  FUTURE, WHAT'S COMIN' AT YA! FRUGAL LIFE STYLE TIPS,  HOW TO SURVIVE the COMING GREAT DEPRESSION, and Secrets of Nature, HOLISTIC, AFFORDABLE HEALING. Also ARTISANRY FOR EXPORT, EARN EUROS... Anita is at astrology@earthlink.net ). Get a free natal horoscope "my money/future life" reading now + copy horoscope as a Gif file graphic! No smarter, more accurate DESTINY reading out there!

<==== BACK TO THE WALL STREET MELTDOWN WEBSITE,WHAT TO DO TO SURVIVE TIPS

<==== BACK TO THE SHOW BUSINESS, ARCHIVE

<====HOW TO TINKER WITH OTHER PEOPLE's BRAINS for $$ - TANTRUM YOGA