WHY WAS PORTER GOSS DROPPED AS HEAD OF CIA in Spring 2006?
CUZ THE CIA WAS STILL DEALING COCAINE TO USA's KIDS! 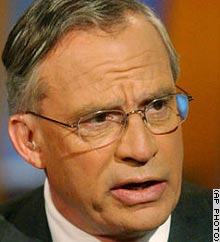 I RAISE MONEY with drugs, to PAY
FOR CIA DIRTY TRICKS abroad. SO?
EVERY DCIA since DULLES has been
doin' it........with HEROIN.


The “mystery” of Porter Goss’ resignation as CIA Director May 2006  is
apparently directly related to the huge seizure in Mexico several weeks
earlier of over 5.5 tons of cocaine, IMAGINE FIVE FORD 250's with a
FULL PAYLOAD. GOT THE PICTURE? So it's SOUTH AMERICAN
COKE. This plane was caught by MEX, according to government
documents recently obtained by the The MadCowMorningNews.

After Goss’s surprise resignation last month he told reporters his
reason for resigning was "just one of those mysteries," offering no
other explanation for his sudden departure after almost two years on the job.

Goss’ resignation appears to be connected to the unprecedented
withholding by the Federal Aviation Administration of the registration
records for the DC9 (N900SA) which more than six weeks ago was caught
carrying a cargo of five-and-a-half tons of cocaine, neatly packed into
126 identical black suitcases at a jungle airstrip in the Yucatan.

Last week the MadCowMorningNews was successful in obtaining the FAA
records last week of the confiscated plane’s sister ship, an identical
twin DC9 (N120NE) owned and operated by the same partnership. Both
aircraft, painted to resemble U.S. Government aircraft from the
Department of Homeland Security, were parked for several years at the
general aviation terminal at Clearwater St Petersburg International
Airport.

Registration records of the twin plane show it has been owned for almost
two decades by a series of firms previously revealed as aviation “front”
companies of America's Central Intelligence Agency.

(THREE IMPORTANT ARTICLES:
1.) HISTORY OF CIA DEALING DRUGS, SIXTY YEARS LONG and
2.) their MURDER OF GARY WEBB who CAUGHT SIGHT.) (CLICK ON THEM!)
3.) PORTER GOSS WORKED ON THE JFK HIT with the KNOWN KILLERS Howard HUNT, Frank STURGIS, RODRIGUEZ! Photograph and text is HERE ^ E.Howard Hunt confessed on his death bed that LBJ ordered the hit. Cord Meyer rigged the team. Then RFK killed Cord's wife. Then Cord killed RFK. It's all there.

In fact, the plane’s owners over the past two decades reads like a Who’s Who of aviation companies known to serve as “fronts” for the CIA, whose true identities came to light during the Iran Contra Scandal.

IT IS TIME FOR ALL THE COMPANIES DEALING COKE to OUR KIDS TO REGISTER as ALIENS! FORGET LATINO wetbacks allegedly taking JOBS that YOUR CHILD MIGHT WANT, and forget BEANERS registering as aliens. THESE CIA SPOOKS are doing toxic, addictive CRIMINAL stuff that is really hurting, really ALIEN to OUR YOUTH!

DECEMBER 07, this just in. Plane's PILOT suicided by hanging himself with his socks!

A pilot arrested while awaiting
the ill-fated landing in Mexico of
the DC9 airliner carrying 5.5 tons
of cocaine 18 months ago committed
suicide by hanging himself this
weekâ€¦ with his socks, in the
maximum security Altiplano prison
facility outside Mexico City.

The death of Marco Antonio Perez Gracia is just the
latest to be blamed on the scandal surrounding the DC9
(N900SA) airliner, as well as a Gulfstream II (N987SA)
business jet which crash-landed and broke into three
pieces in September in Mexico, spilling 4 tons of
cocaine across a muddy field 25 km outside Merida.

Adding to the intrigue, Narco News reported last week
that Gregory D. Smith, one of two Fort Lauderdale FL
charter pilots left holding the bag as the last
registered owners of the Gulfstream II business jet
(Cocaine Two) busted in Mexico with 4 tons of cocaine,
worked for the CIA and DEA as a pilot during the late
1990's.

While Greg Smith was flying luxury jets to Colombia and
back for the CIA and DEA during the late 90's he was
also in business with Ed Showalter a con man then right
in the middle of stealing millions from shareholders in
a corporation for which Smith was a director.

Showalter was allowed to defraud unsuspecting
shareholders over and over again, through frank,
outright, and most of all, unpunished fraud, the
MadCowMorningNews can report exclusively.... just like
Glen and Brent Kovar, at SkyWay! Aircraf t, owners of
the DC9, the 'other' CIA drug plane.

Our POSTER is ANITA SANDS HERNANDEZ, Los Angeles Writer, Futurist and Astrologer. Catch up with her websites  TRUTHS GOV WILL HIDE & NEVER TELL YOU, also The  FUTURE, WHAT'S COMIN' AT YA! FRUGAL LIFE STYLE TIPS,  HOW TO SURVIVE the COMING GREAT DEPRESSION, and Secrets of Nature, HOLISTIC, AFFORDABLE HEALING. Also ARTISANRY FOR EXPORT, EARN EUROS..* Anita is at astrology@earthlink.net ). Get a 15$ natal horoscope "my money/future life" reading now + copy horoscope as a Gif file graphic! No smarter, more accurate career reading out there!