THE ONE CLEAR WINNER IN IRAQ: MERCENARIES & WAR PROFITEERS 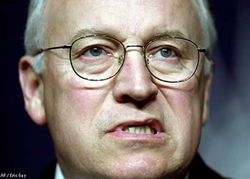 CHENEY EARNS a multi million dollar a year salary* from one corporation in IRAQ: Halliburton

by JEREMY SCAHILL, COUNTERPUNCH - With almost no congressional oversight
and even less public awareness, the Bush administration has more than
doubled the size of the U.S. occupation through the use of private
war companies. There are now almost 200,000 private "contractors"
deployed in Iraq by Washington. This means that U.S. military forces
in Iraq are now outsized by a coalition of billing corporations whose
actions go largely unmonitored and whose crimes are virtually unpunished.

In essence, the Bush administration has created a shadow army that
can be used to wage wars unpopular with the American public but
extremely profitable for a few unaccountable private companies.

Since the launch of the "global war on terror," the administration
has systematically funneled billions of dollars in public money to
corporations like Blackwater USA , DynCorp, Triple Canopy, Erinys and
ArmorGroup. They have in turn used their lucrative government
pay-outs to build up the infrastructure and reach of private armies
so powerful that they rival or outgun some nation's militaries. . .

Precise data on the extent of U.S. spending on mercenary services is
nearly impossible to obtain - by both journalists and elected
officials-but some in Congress estimate that up to 40 cents of every
tax dollar spent on the war goes to corporate war contractors. At
present, the United States spends about $2 billion a week on its Iraq
operations. . .

At present, an American or a British Special Forces veteran working
for a private security company in Iraq can make $650 a day. At times
the rate has reached $1,000 a day; the pay dwarfs many times over
that of active duty troops operating in the war zone wearing a U.S.
or U.K. flag on their shoulder instead of a corporate logo.

* SALARY CHENEY EARNS ESTIMATED at 1/4 mil to a mil a yr.
maybe more, some say it's billions.

Our POSTER is ANITA SANDS HERNANDEZ, Los Angeles Writer, mother of 4 and career Astrologer. Catch up with her websites  TRUTHS GOV WILL HIDE & NEVER TELL YOU, also The  FUTURE, WHAT'S COMIN' AT YA! FRUGAL LIFE STYLE TIPS,  HOW TO SURVIVE the COMING GREAT DEPRESSION, and Secrets of Nature, HOLISTIC, AFFORDABLE HEALING. Also ARTISANRY FOR EXPORT, EARN EUROS... Anita is at astrology@earthlink.net ). Get a free natal horoscope "my money/future life" reading now + copy horoscope as a Gif file graphic! No smarter, more accurate career reading out there!

<=== BACK TO "DONE WELL,  ACTIVISM IS A DELIGHT  and CREATES CAREERS as well as PLANETARY EVOLUTION"

<== BACK TO PROPAGANDA STUDIES --HOW GOV CONTROLS REPORTERS, SO THEY PROXY-LIE TO YOU DUPES

<====VISIT THE EXPERTS at THE BEST SITES ONLINE

<=== THE SECRETS, THE TRUTHS 'they' don't want you to know, INDEX PAGE

<=== THE WAR INDEX. WHY THE OLIGARCHS LOVE WAR TO DEATH

<==== PORTAL TO 7,000 FREE CLASSROOMS, REPUBLISH ALL on your BLOG! ATTRACT AD REVENUE

<=== BACK TO THE TRUTH ABOUT OUR DYING AMORAL CURSED WORLD