America SUPPOSEDLY Land of the Free but REALLY --- the Gulag Nation
ANYTHING that suits the elite passes for  "LAW" these days. PROOF? SUPREME SELL OUT NEIL GORSUCH!

Remember how RUSSIA used to throw dissidents into 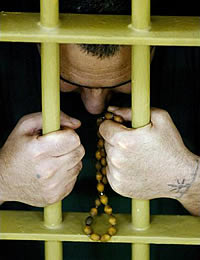 Siberian work camps and just leave them there until they died? How Red China did it to even suspected dissidents. Both countries did it to food thieves although to their credit, both were Commie countries that fed their poor rice, beets or wheat, survival foods.

Here in AMERICA where the poor don't get fed or educated or educated and helped to find jobs, where Bill Clinton ended welfare, created WORK FARE and lock-key infants while mother cleans FREEWAYS, where Mom shoplifts a dinner for the babies, it's GET CAUGHT GO TO PRISON. Crimes to feed children are a kind of dissidence in a fascist, capitalist society.  The U.S. Dept. of Justice just released the latest figures on American prisons.  Currently, there are 2.1 million people incarcerated. One in every hundred of us!  Any time you hear America is a democracy, where citizens have rights, remember that prisons represent our 35th largest state. We have more people in prison than live in Nevada, West Virginia, New Mexico, Nebraska, Maine, Idaho, New Hampshire, Hawaii, Rhode Island, Montana, Delaware, South Dakota, North Dakota, Alaska, Vermont, or Wyoming. Figures amount to 2.9 MILLION behind bars, 5 million arrested and in jail at any time. Add on 25,000 Latino children, sleeping on floors under aluminum foil.

According to a report by the Sentencing project, crime rates have been declining since 1990, but the prison population has risen by 49% during this time.

America now is the greatest jailer on earth. .... Our rate of imprisoning our citizens is approximately 600% higher than RED China. Racially, things are even worse.  In historical perspective, the 899,000 African Americans incarcerated today are nine times the number of 98,000 in 1954, the year of the Brown v. Board of Education decision.  So there are now 900% more blacks in prison today than there were 50 years ago, while the black population has only doubled, or increased 100%. Put another way, you can say that a black person is nine times more likely to be held a prisoner today in the U.S. than they were in 1954.

The huge surge in incarcerations are almost all due to PRO-OLIGARCH GREED decisions and punitive and racist laws that criminalize behavior that is considered to be minor in other countries.  Among these are non-violent drug offenses, and the notorious three strikes laws.  For example, again using info from the sentencing project, in California, which has a three strikes law, "the third "strike" of more than half (57%) of these persons is for a non-violent offense. In one recent case, Santo Reyes was sentenced to 26 years to life for trying to take the written portion of a driver's license test for his illiterate cousin. Reyes had previously had a juvenile burglary conviction in 1981 and an adult robbery conviction in 1987.

Even the highest judges rule in favor of corporations and the rich no matter how cruelly that punishes the innocent. GORSUCH cases bear this out. Yet the GOP picked him as their boy for the supremes. You wonder why. Don't. It's a rich man's law, that is all there is to it.

A report by the Treatment Advocacy Center shows that there are now 10 times as many  individuals with severe and persistent mental disorders in state and county prisons than in state psychiatric  institutions. The ratio may be even larger than 10 to 1, since mentally ill inmates in federal prisons were excluded from the report, as were those in private prisons utilized by states such as Alaska and Hawaii.

In America we have imprisoned for life a man who committed two robberies in 24 years, and then tried to take a written license test for his illiterate cousin. .... cuz he hit the three strikes and you're out ruling!

Yes. the Prison Industry is a very lucrative business upon which millions profit and depend. The more prisons built, the more people they can thrown in prison. Every prison must be kept to overflow. The objective is to make sure there are no empty beds, for empty beds are indicative of lost revenue to the Prison Industry. Of all things, they must keep that turn$tyle turning. The faster the better, racking up billion$ for more construction for prisons, more guards, more lawyers, more judges, more police, etc., etc.

This is why, left to its own conclusion, there shall never be a conclusion to crime on the streets, for crime is so very profitable and important to the existence of government. Without it, people would start questioning the need for so much government. Crime gives the politicians the ammunition needed to sing their re-election hymn, "Vote For Me," with its first stanzas, "I'm Tough On Crime!" And so goes the American Prison Industry until it exceeds the size of that of General Motors.

J.A.I.L.- Judicial Accountability Initiative Law - http://www.jail4judges.org
JAIL is a unique addition to our form of gov't. heretofore unrealized.
JAIL is powerful! JAIL is dynamic! JAIL is America's ONLY hope!
JAIL is taking America like a wildfire! AddRemove@jail4judges.org
JAIL is making inroads into Congress for federal accountability!
E-Groups sign on at http://groups.yahoo.com/group/jail4judges/join
Get involved at JAIL_SALE_USA-subscribe@yahoogroups.com
Donate offerings to J.A.I.L., P.O. Box 207, N. Hollywood, CA 91603
"Give me your wealth, and I will give you America"  - Ron Branson

"..it does not require a majority to prevail, but rather an irate, tireless minority keen to set brush fires in people's minds.." - Samuel Adams FOUNDING FATHER.

"There are a thousand hacking at the branches of evil to one who is striking the root." THOREAU

So How can YOU the activist strike at the root of this jail crazy administration? Share ideas with us at astrology at earthlink. net --anita sands the poster lives here.

"You know we live in dark days when common people fear the government more than criminals!" found online..

"This isn't a courtroom but a cash register --" Defense Attorney, shaking her head.
WHICH IS WHY JUDGES NOW ROUTINELY TAKE KICKBACKS FROM private corporation lock ups, even those used to incarcerate children. And judges are more motivated to lock even innocent children up

See what they did to a Los Angeles ARTIST, a young BASQUIAT TYPE. make painting ever again as a career or hobby... totally illegal for him and demand he pay 23k to court SEE  L.A. COURTS SUCK MONEY VAMPIRISHLY!   when they couldn't prove he was still painting outdoors at night-graffiti as he now got 2k per canvas. They were just exploiting him with rage for being a success! The COURTS have become an inhumane torture machine and greedy CASH REGISTER!

Our POSTER is ANITA SANDS HERNANDEZ, Los Angeles Writer, Futurist and Astrologer. Catch up with her websites  TRUTHS GOV WILL HIDE & NEVER TELL YOU, also The  FUTURE, WHAT'S COMIN' AT YA! & HOW TO SURVIVE the COMING GREAT DEPRESSION, and Secrets of Nature, HOLISTIC, AFFORDABLE HEALING. Also HOW TO LIVE on A NICKLE, The FRUGAL PAGE.* Anita is at astrology@earthlink.net ).
Get a 35$ natal horoscope "my love/ money/future life" reading now + copy horoscope as a Gif file graphic!

<=== BACK TO AMERICAN INJUSTICE


<===BACK TO MONEY SECRETS ONLY THE EXPERTS KNOW

<====HOW TO TINKER WITH OTHER PEOPLE's BRAINS and make 100$ an hour; just call it "TANTRUM YOGA" NOT PSYCH WORK

<==== BACK TO FREE ARCHIVE of 7,000 "INSTANT WEALTH" ARTICLES; REPUBLISH ANY OR ALL FREE, ATTRACT AD REVENUE