STARVATION IN THE USA? which WAS til now THE WEALTHIEST COUNTRY? COULD IT HAPPEN?

Life gets cheap when food costs get high. Just a few years before I was born, Stalin began his murder of seven million Russian farmers. People wonder how this event occurred! It started in 1928 after a bad harvest. It escalated into Uncle Joe driving ten million farmers off land into camps, where they froze/starved, and Mother Russia taking their land for "efficient" agri-collectives.

These URLS refer to that time and may show us parallels (NOT EXACT OF COURSE) to the things that COULD happen when even a prosperous nation is in extreme panic i.e, our current depression, in our own era. During the L.A. Riots, I saw CURFEW and all supermarkets shutting down at 6PM and everyone in line, like a line of l00 people at cash register and the curfew drawing near, so you had to leave your groceries and run home where there was nothing but a ten year old frozen chocolate cake for dinner.

SO UNLESS you have a garden, or a pantry with grains and cans, you starve. 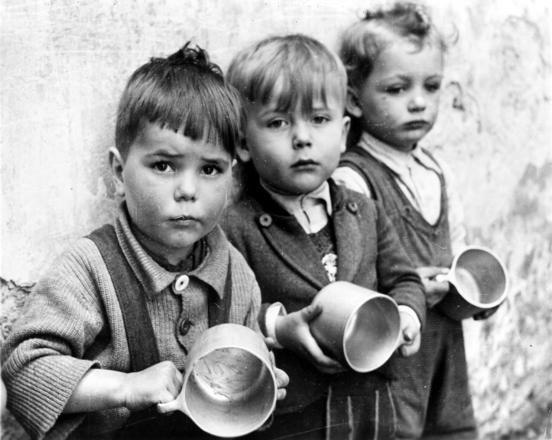 Bush spent 161 trillion so far on Iraq war. Obama has spent the same or more. Pharoah's seven bad years have to come. Nowadays, nobody is seeking to dump farmers in camps like Georgia Joe Stalin did except maybe CEOS of agri businesses who want their land. YEAH, oh yeah!

When this THROW THE FARMERS off the land trend began, FARM AID consciousness sprang up to defend and fund farmers. The Willie Nelson set slightly abrogated the trend. Then CLINTON went at the poor. He nailed welfare recipients, the TRULY useless mouths (!) reproducing at state expense. He gave all corporations leave to move the factories to the THIRD WORLD with NAFTA AND GATT. So now, joblessness is here and the state sponsoring ‘Retards’ to breed and feeding them with mythical cheese giveaways are over with.

WHO is targeted now? Who is extraneous? Who are the useless eaters? 10-20 million Russians died in 'their depression' era....Every time the oilmen lower the price of gas per barrel, Russians go jobless and there is no welfare in Russia. They freeze and starve in the snow. How many died or starved in our own country? Back in thirties? Now, how many people starve and nobody knows about it? And imagine a future recession? What will give? We have farmers going bankrupt, drought, high taxes, agri corps buying them out at bottom dollar? Only agri food will be grown and be available. JOBS everywhere have disappeared? WHO WOULD GET PENNED UP? WHY are they building so many pens, privatizing jails?

The cold war with RUSSIA AND CHINA stopped as SOMEONE ON HIGH said 'hey, we need the money; Those are folks we trade with.' Then, they closed all military bases and turned them into concentration camps. Well, it's said, it's been said on the internet for years, even activist guys with cameras went and photo’d the areas. I live in L.A. and saw the military flatten a huge park and empty the lake to build a military site just recently.

My Grandparents never spoke of it, but all their relatives were carried to camps and starved to death, 14 or 15 great grandparents. My Cousin got that number after researching records in those geneology sites. He had the death certificates from the camps. ALL SAID STARVATION. My grampa/grandma and Dad and AUNT suffered from the Inflation & depression in Germany, 20's, 30's where it took a wheelbarrow of cash to buy a loaf of bread.

My Mom went thru the same in California, putting herself thru S.C in the MIDDLE of the Great Depression. Her mother turned the family home into a boarding house. The whole scenario affected them both. So It's in my genes to wonder how thick the pudding can get and how to swim through it when the going gets ugly when The Ugly get going.

What would you think would be the features of some kind of ORWELLIAN vision of the immediate future that would be most accurate? Does it entail: homeless shelters? Camps out in the country, being forced to farm in collectives? Or just the current trend: rampant homeless on streets?

Double digit Inflation? No medical care or SSA for oldsters? Houses tripling in cost? TAXES on homes unpayable by oldsters? Immoral Wars by our gov to steal resources? What else? THEFT/crime going up?

THE FINANCIAL TIMES said of a recent analysis of our economy (this is an excerpt) "The study's analysis of future deficits dwarfs previous estimates of the financial challenge facing Washington. It (THE DEBT OF USA) is roughly equivalent to 10 times the publicly held national debt, four years of US economic output or more than 94 per cent of all US household assets.

The Bush administration has shelved a report commissioned by the Treasury that shows the US currently faces a future of chronic federal budget deficits totalling at least $564 BILLION in current US dollars.  The war is reputed to have cost 3 TRILLION.

COST OF WAR DOT COM HAS LATEST FIGURES. 4 million an hour for each of the three or four wars.

The study, the most comprehensive assessment of how the US government is at risk of being overwhelmed by the "baby boom" generation's future healthcare and retirement costs, was commissioned by then-Treasury secretary Paul O'Neill.

But the Bush administration chose to keep the findings out of the annual budget report for fiscal year 2004, published in February, as the White House campaigned for a tax-cut package that critics claim will expand future deficits.

The study asserts that sharp tax increases, massive spending cuts or a painful mix of both are unavoidable if the US is to meet benefit promises to future generations. It estimates that closing the gap would require the equivalent of an immediate and permanent 66 per cent across-the-board income tax increase.

The study was being circulated as an independent working paper among Washington think-tanks as President George W. Bush on Wednesday signed into law a 10-year, $350bn tax-cut package he welcomed as a victory for hard-working Americans and the economy.

The analysis was spearheaded by Kent Smetters, then-Treasury deputy assistant secretary for economic policy, and Jagdessh Gokhale, then a consultant to the Treasury. Mr Gokhale, now an economist for the Cleveland Federal Reserve, said: "When we were conducting the study, my impression was that it was slated to appear [in the Budget]. At some point, the momentum builds and you think everything is a go, and then the decision came down that we weren't part of the prospective budget."

Mr O'Neill, who was fired last December, refused to comment.

The study's analysis of future deficits dwarfs previous estimates of the financial challenge facing Washington. It is roughly equivalent to 10 times the publicly held national debt, four years of US economic output or more than 94 per cent of all US household assets. Alan Greenspan, Federal Reserve chairman, last week bemoaned what he called Washington's "deafening" silence about the future crunch.

President Bush signed into law a $350bn tax-cut package on Wednesday saying:``We can say loud and clear to the American people: You got more of your own money to spend so that this economy can get a good wind behind it." Read more of the FT's news and analysis of the tax-cut debate.

The estimates reflect the extent to which the annual deficit, the national debt and other widely reported, backward-looking data are becoming archaic and misleading as measures of the government's solvency. Mr Smetters, now a University of Pennsylvania finance professor, said tax cuts were only a fraction of the imbalance, and that the bigger problem "is the whole [budget] language we're using".

Laurence Kotlikoff, an expert on long-term budget accounting, alleged in a recent Boston Globe editorial that the Bush administration suppressed the research to ease passage of the tax-cut plan.

An administration official said the study was designed as a thought-piece for internal discussion - one among many left every year on the cutting-room floor - and noted the budget's extensive discussion of projected, 75-year Social Security and Medicare shortfalls.

That would indicate ALL YOUR SALARY subtractions for your entire LIFE (plus the interest they’d have accrued in an INTEREST bearing account,) said money taken by your GOV ---would not be there to protect you as an oldster. RETHINK your old age strategies, your health needs. Seems to me there is something there to look at. Futurists have to cast their eyes on these items. When the going gets tough, the tough get GOING!

Our 'POSTER-BLOGGER' is ANITA SANDS HERNANDEZ, Los Angeles Writer, Researcher,  mother of 4, grandmother of 6, also a career Astrologer. Catch up with her websites TRUTHS GOV WILL HIDE & NEVER TELL YOU, also The  FUTURE, WHAT'S COMIN' AT YA! FRUGAL LIFE STYLE TIPS,  HOW TO SURVIVE the COMING GREAT DEPRESSION, and Secrets of Nature, HOLISTIC, AFFORDABLE HEALING. Also ARTISANRY FOR EXPORT, EARN EUROS....* Anita is at astrology@earthlink.net ). Get a FREE natal horoscope "my money/future life" reading now + copy horoscope as a Gif file graphic! No smarter DESTINY reading out there .