THE PROBLEM OF
POLICE BEATING PEOPLE UP! 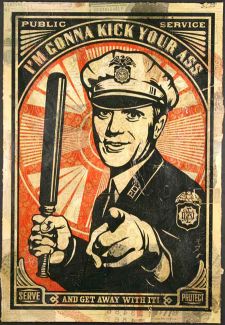 We are the folks who salary the cops with our high taxes, yet they take joy in pounding our faces in --every chance they get.  Did you know that you can ask your GOOGLE page to give you google alerts on any subject? If you don't want to miss a story on something you're researching, you want to get a Google alert. Mine was on this phrase "BEATEN BY POLICE." I didn't expect a whole lot, but DAILY this kind of story comes in, two or three times, stories the robot found on the news services about police brutality incidents, (all occurring in America oddly enough. The norse don't do it, The Brits don't do it. The SWISS certainly don't do it. The ex Nazis in Germany don't even do it. If you judge by headlines, RUSSIANS don't do it in spite of the fact that's all the KGB did from the thirties through the eighties. But these days? JUST the AMERICANSKI!.) I have two friends in Los Angeles who were beaten up by the cops. First was a brilliant but snarly woman, a redheaded Jewish comic/actress.. Second a hippie yogi, vegan. Both of them have been damaged by the experience but didn't sue.

Ask The GOOGLE ROBOT. When asked kindly he is likely to spot every single victim of a peace officer passing some poor citizen through the manly meat grinder and with video occasionally! A few meek maids went through the cop chopper but of all the stories I get daily, this Alabama victim had a spin that caught my attention!

This poor African American man DID NOT KNOW he'd been beaten up by cops, or remember being caught and pounded into raw meat cuz a.) He was three sheets to the wind and b.) Cops hid the video of it. And the judge gave the fellow 20 yrs. for some assault crime never detailed  A year later somebody finds the VIDEO and blows the whistle! The headline caught the amazement we all felt. It read:

Anthony Warren didn't know he was beaten by five Birmingham police officers  until video of the incident surfaced more than a year later.  The man who was beaten by five Birmingham police officers is serving 20  years in prison after pleading guilty to an assault charge in March. But  he's not done with court.  Anthony Warren's attorney, Wendy Crew, filed a claim against the city in  March, the first step before filing a lawsuit seeking damages. She said Wednesday the claim was over the "horrific" beating and an attempt to  suppress the video of it.

District Attorney Brandon Falls said the tape surfaced unexpectedly as
prosecutors were preparing to try Warren. He said prosecutors had a video
of the chase "but the beating was not on the copy we had."

Falls said the prosecutor wanted to play the video for the jury but, for
technical reasons, she needed another copy and asked for the original.

"We got the original the week before the trial ... and that's where she saw
the rest of the tape," he said.

He said they contacted the defense, the Alabama Bureau of Investigation and
the Birmingham police chief.

On Wednesday, police chief A.C. Roper fired the five officers involved in
the beating. Roper is also reviewing the action of as many as a half-dozen
supervisors who saw the video over the past year and never reported it.

Crew said police "deliberately tampered with the evidence" in their
handling of the video prior to the criminal trial.

"As horrific as the beating is, the deliberate tampering of evidence is
just as horrific," she said.

Crew, who did not represent Warren in the criminal case, said he fled in
the van because he was confronted by a man who never identified himself as
an officer, was not in uniform and drove after him in an unmarked car. She
said he had not been accused of any crime when the pursuit began.
She said Warren, who was hospitalized for a few days after the chase,
was "totally unconscious" when he was beaten and did not know it happened
until the video surfaced. Imagine, no court official, no PROSECUTOR, no DEFENSE
lawyer ever mentioning it. Same happened to this researcher, Anita Sands Hernandez.
A crazy, insane woman accused me of causing her two broken hips. I was arrested.
Six months later, crazy's next door neighbor told me she was up on roof in worst
rain storm in history, with tarps, bricks, at midnight, she's 80 yrs old, and fell. This
happened 3 days after I went in to get my kidnapped kitten. See
http://www.masterjules.net/blondisyndrome.htm
About people who hate people, love only pets. Like HITLER and his dog Blondi.

When anything in the news sticks out, I send it on. So I sent this not only out onto the net, posting it on THE FUTURE , WHAT'S COMING ARCHIVE --and at the GOV JAILS THE POOR WEBSITE that I do, and I send it out to my mailing list. (Write me you get on it, astrology at earthlink. net) and I got this back from an Englishman: " What disturbs me about such stories is this: 'Only occasionally' are the police thugs  fired, and that there are no criminal indictments against these 'gentlemen' following 'discovery' of their criminality. The charges against the police thugs should obviously be:

a.  Bodily assault, a felony.
b.  Brutal and unwarranted assault against a citizen.
c.  Vicious and sadistic attack and bodily assault upon a defenseless
and unconscious person;
d.  Conspiracy to pervert the course of justice;
e.  Perverting the course of justice by tampering with and withholding
evidence essential for the defence in a court of law;
f.   Lying in a court of law in order to influence the court to find
against the accused;
g.  Cash judgement for criminal damages by both the city and the police department.
h.  Anything else that can be thrown at them so that they serve a few years
of their lives in prison and get beaten up a few times, themselves! and become authority
haters! And indoctrinate their children likewise.

TELL ME THIS ISN'T HAPPENING IN AMERICA!!

which has video. You'll get several hundred urls if you google search term words like POLICE BRUTALITY.

"You know we live in dark days when the common people fear the government more than criminals! "

<===BACK TO THE EMPIRE INDEX PAGE

<=== BACK TO THE MAKE IT IN HOLLYWOOD AS A WRITER, PRODUCER, VIDEO DOCUMENTARIAN WEBPAGE

<== BACK TO THE WEB TECH FOR DUMMIES WEBPAGE

<=== BACK TO THE COLONIAL KITCHEN

<===    BACK TO THE CONVERSATION FOR DUMMIES INDEX

<==BACK TO THE COUNTRY FARM GETAWAY ARCHIVE