< That's the BIG ONE IN 1929. We hear about it from our grandparents though a simple GOOGLE will give you these facts. Ponder them to see what we can expect with THIS 2018 continuing Depression. 105 million americans jobless. Back in 2009, when I first collected this data, three airlines went bust in a week and about a dozen banks & Wall Street Corps were hovering on the brink. The Fed and IMF were attempting resuscitation on Bear Stearns. A Casino Bank. Hopeless maneuver. The USA owed l0 trillion to China which Bush had earlier spent on a dumb war, a mendacious war, to get cheap oil. Social Security Adminstration is going bust, ditto Med-I-Care and with the BOOMERS coming, that foreshadows some dire events. We deduced that we were at the edge of a recession. It wasn't just America, either. France's Soc Gen Traders lost 7 billion, blamed it on some kid. A "Rogue Trader" they call it. My impression was that this was to cover up their own bad bets. All these Stock market guys around the world are and WERE addicted to running their banks like casinos, (abrogation of Glass Steagall by Clinton allowed that,) --gambling and cheating smaller banks to get easy money in huge sums, legal racketeering as they bilked investors. So I was seeing a definite cloud on the horizon.  I blogged about it and opined that a BIGGER Crash was coming.

Folks tell me, don't worry so much --So far, this is Nothing like The BIG ONE in  '29. Hmmm. I remember that one. My California granny turned the house into a BOARDING HOUSE. My German Granny had to bring a wheelbarrow of cash to buy a loaf of bread, so badly devalued was the Deutsch Mark. Remembering, I wonder what were the statistical causes/ symptoms and effects of the Wall Street Crash of 1929? I GOOGLE and learn that:In 1929, 659 banks went bust. In 1931, 2294 banks went bust.

Both industrial and farming production fell by 40% and average wages fell by 60%.

Unemployment so bad in the great depression economic disaster that people
were forced to use free soup kitchens. They had no money for food.

In Cleveland, a big steel town, 50% of the people were unemployed in 1932.
In Toledo there was 80% unemployment.

Every major town and city had a “Hooverville”, which was a collection of
huts and shacks housing the homeless.

In 1931, 238 people were admitted to hospital due to malnutrition and
starvation, 45 of them died. Who knows who died NOT in hospitals.

The Bank of New York went bust and 400,000 depositors lost their savings.

President Hoover got all the blame…The inflation in Germany brought
Hitler into power.

WHO WAS TO BLAME? http://en.wikipedia.org/wiki/Great_Depression
Click there, then come back

The effects of the Great Depression was huge across the world. Not only did
it lead to the New Deal in America but more significantly, it was a direct
cause of the rise of extremism in Germany leading to World War II.

2. Bank Failures
Throughout the 1930s over 9,000 banks failed. Bank deposits were uninsured
and thus as banks failed people simply lost their savings. Surviving banks,
unsure of the economic situation and concerned for their own survival,
stopped being as willing to create new loans. This exasperated the
situation leading to less and less expenditures.

The Enron type maneuvers soured the world on our Stock Market and in its wake
banks began failing, and so did big financial houses.

3. Reduction in Purchasing Across the Board
With the stock market crash and the fears of further economic woes,
individuals from all classes stopped purchasing items. This then led to a
reduction in the number of items produced and thus a reduction in the
workforce. As people lost their jobs, they were unable to keep up with
paying for items they had bought through installment plans and their items
were repossessed. More and more inventory began to accumulate. The
unemployment rate rose above 25% which meant, of course, even less spending
to help alleviate the economic situation.

We've lost more jobs in the last year than ever in recent history since the Depression.
More firings. More downsizing. NAFTA, GAT and the WTO have factories moving to the
third world and now even FARMERS are moving their farms south of the border. New trends!

4. American Economic Policy with Europe
As businesses began failing, the government created the Hawley-Smoot Tariff
in 1930 to help protect American companies. This charged a high tax for
imports thereby leading to less trade between America and foreign countries
along with some economic retaliation.

I read that Egypt has just had to stop charging tariffs on wheat coming in as wheat just doubled in price and their people are starving. They tried to give the populace a break. That's good.

5. Drought Conditions
While not a direct cause of the Great Depression, the drought that occurred
in the Mississippi Valley in 1930 was of such proportions that many could
not even pay their taxes or other debts and had to sell their farms for no
profit to themselves. This was the topic of John Steinbeck's The Grapes of
Wrath. The California drought needs its own novel as big biz is sucking up
all the parched farms sold by farmers who lost their water sources, and for bottom dollar.

We read that California is not alone; water is drying up everywhere, no rain, lakes sinking into  mud beds. American millionaires are buying up water rights in strange corners of the globe to sell water to the peons. I read that Bush and Ted Turner bought a million acres each in PARAGUAY and Patagonia.Bechtel bought up Villacumba Ecuador's famous water that makes people live to 200 yrs of age. Some futurists think water may be more valuable than oil. Well, if solar flares get worse, and ozone thinner. But some of these above conditions are things that may be in our future. But what is in our "NOW"? USA downgraded to a second rate risk. Soldiers still getting shot out of the sky in Afghanistan, a war you and I don't need. The oil corps need it to get oil out of Southern Russia with a PIPELINE. That's the only 'who' that needs that war.

Dorothea Lange shot this famed photo of homeless Florence Owens, California mother of 7 living in a tent, eating frozen vegetables out of fields and the birds that her children would catch. 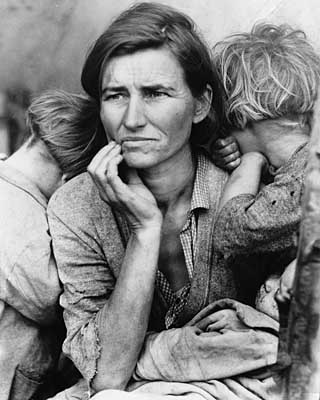 Our POSTER is ANITA SANDS HERNANDEZ, Los Angeles Writer, Futurist and Astrologer. Catch up with her websites  TRUTHS GOV WILL HIDE & NEVER TELL YOU, also The  FUTURE, WHAT'S COMIN' AT YA! FRUGAL LIFE STYLE TIPS,  HOW TO SURVIVE the COMING GREAT DEPRESSION, and Secrets of Nature, HOLISTIC, AFFORDABLE HEALING. Also ARTISANRY FOR EXPORT, EARN EUROS... Anita is at astrology@earthlink.net ). Get a 35$ natal horoscope "my money/future life" reading now + copy horoscope as a Gif file graphic! No smarter, more accurate career reading out there!

<====BACK TO THE HOLISTIC GOURMET, BON MARCHE, WELFARE COOKERY

<=== BACK TO THE FRUGAL LIFESTYLE

<=== BACK TO THE CITY FARMER'S GARDEN INDEX

<===BACK TO THE CONSPIRACY WEBPAGE, JERRY'S REFRIGERATOR

<=== PORTAL to 7,000 FREE CLASSROOMS, NO REGISTERING. REPUBLISH ANY OR ALL FREE. ATTRACT AD REVENUE