(A SELF EXPIATORY  Editorial By John Yoo Esq. formerly of White House) 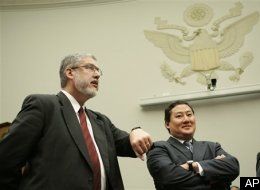 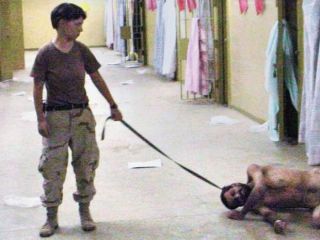 You are looking at the demure, lovely JESSICA NYQUIST,
THE "LITTLE VIKING" Click ABOVE   ^ for UTUBE shots and CLICK on THIS ====> "Scenes from a Concentration camp"

Then we will be entertained by John YOO, Ex Bush Lawyer who validated torture back then For DUBYA and CHENEY!

YOO starts off with a bang, hitting one right out of the PARK when he SAYS "A report on enhanced interrogations released
by Sen. Dianne Feinstein was done without bipartisan support. (violins are heard on track).IN OTHER WORDS WE DID NOT
GET THE PERMISSION OF CONGRESS! WE DID IT OUR WAY.

SENATOR DIANNE FEINSTEIN, chair of SENATE INTELLIGENCE OVERSIGHT COMMITTEE decided to go out with a bang and COME OUT AGAINST TORTURE.

California Senator Feinstein ONLY headed the Senate Oversight committee on Intelligence and knew everything there was to know and in 2014 was retiring from her fascist high office, so why not be come over to the side of Jesus and be a total whistleblower and tell the truth that nobody else in CONGRESS ever would??? You only get that chance once in a lifetime and boy, she earned it.

Yoo goes on "In defense of CIA interrogation -- still not torture, still the right thing to do. (Yes! Norman Rockwell should do  Mag cover art on it.) "On interrogation tactics, Sen. Dianne Feinstein misunderstands 'our values'

Sen. Dianne Feinstein's report last week on enhanced interrogations under the George W. Bush administration suffers from fundamental flaws. The Senate Intelligence Committee took the unprecedented step of proceeding without Republicans even though previous investigations have  always been bipartisan. It cherry-picked from millions of CIA documents and, unbelievably, refused to interview any witnesses. (Sorry. Those who survived are not quite ambulatory yet)

"Without bipartisanship and testimony, the report's claims cannot be trusted. CIA directors from both parties, including George Tenet (who served under Presidents Clinton and Bush) and John Brennan (who serves under President Obama), have rejected many of the report's factual findings and its central claim that the CIA systematically misled the White House and the president and covered up the abuse of terrorists.

"The report cannot quarrel with the ultimate fact: ... The United States has succeeded in preventing a second large-scale terrorist attack for the last 13 years.
SEZ WHO? OIL DRILLERS WHO HAVE SPREAD OUT OVER ARABY LIKE THE THREE KINGS? Some serious cui bonum there, fellah.

"But the Feinstein report has one positive virtue: It has moved the debate beyond legality to effectiveness. To be sure, the senator takes a stab at claiming the interrogation methods amounted to illegal torture. The CIA, she writes, "decided to initiate a program of indefinite secret detention and the use of brutal interrogation techniques in violation of U.S. law, treaty obligations, and our values." But the report does not analyze the federal anti-torture law, which in 2001 prohibited interrogation methods with "the specific intentť to cause "severe physical or mental pain and suffering." (chicks in boots with leashes and whips, forced male nudity). 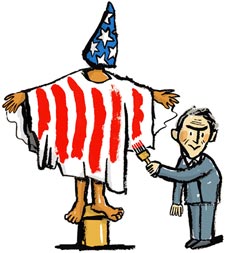 HOW MUCH HAVE BUSH, CHENEY AND
RUMSFELD BROUGHT all AMERICANs DOWN?

"Attorneys in the Bush Justice Department, including me, reviewed whether the CIA's proposed interrogation of Abu Zubaydah, an Al Qaeda planner captured in March 2002 in Pakistan, met that law. The brief statute provided neither further definitions nor examples of prohibited methods (in 2005, Congress passed a detailed law, the Detainee Treatment Act, because the earlier law was vague). For us, as I think for most reasonable Americans, almost all the CIA's proposed interrogation methods did not constitute torture -- the only one close to the line was waterboarding. (Hummus up the butt was fine? The ABU GRAHIB dog leash photos show exemplary American sitcom humor.)

Three reasons persuaded us to approve waterboarding. First, Al Qaeda terrorists were not POWs under the Geneva Conventions, because they fought for no nation and flouted the laws of  war by killing civilians and beheading prisoners (such as Daniel Pearl). Second, the U.S. armed  forces had used it in training tens of thousands of officers and soldiers, without any physical injury or long-term mental harm. Finally, the United States had suffered the deaths of 3,000 civilians and billions of dollars in damage; we knew little about Al Qaeda, and intelligence indicated that more attacks were coming, perhaps using weapons of mass destruction.

Even under these extraordinary circumstances, the CIA would use harsh interrogation on only Al  Qaeda leaders thought to have information about pending attacks â€” in the end the CIA approved the waterboarding of only three Al Qaeda leaders. If some CIA interrogators went beyond these methods, they would not have received Justice Department approval; they could have been disciplined, even prosecuted. Two sets of Justice Department prosecutors, however, investigated the same claims of abuse in the Feinstein report and ultimately brought no charges.

Feinstein implies that the CIA should have chosen standard interrogation methods, which depend  on developing a relationship with the detainee. This may work for law enforcement, but not for any reasonable American president in 2001 and 2002. Building rapport with Al Qaeda leaders could take weeks, months, years â€” or never. Our prisons still hold convicted terrorists, such as those tied to the 1993 World Trade Center bombing, who have never cooperated with authorities.

"Whoever fights monsters should see to it that in the process he does not become a monster." -Friedrich Nietzsche-

In the end, Feinstein makes her case against the CIA on effectiveness, not law. And yet, the report cannot quarrel with the ultimate fact: Contrary to the expectations of terrorism experts inside and outside of government, the United States has succeeded in preventing a second large-scale terrorist attack for the last 13 years. " OH AND TORTURE DID IT, RIGHT?

Feinstein and other Senate Democrats can only attack this record by arguing that the interrogations yielded nothing new. But a central element of the CIA's success 'killing Osama bin Laden and destroying Al Qaeda's leadership 'belies her claim. The U.S. found Bin Laden by tracking a courier to his location. Feinstein's staff discovered the courier's name in CIA files before
interrogations began, and so claims that they added nothing to the effort. This ignores the fact that the names of hundreds, if not thousands, of Al Qaeda suspects sat in CIA files. Only the interrogation of Al Qaeda leaders singled out that individual as the courier.

The report's fatal flaws continue with the capture of Al Qaeda leaders, such as Khalid Sheikh Mohammed and Ramzi Binalshibh, the planners of the 9/11 attacks, or Indonesian terrorist  Hambali, who was working on airplane strikes on the West Coast. As the responses of the CIA  and the Republican minority make clear, interrogations led the U.S. to one leader and then the next in succession. The Feinstein report cannot explain how the CIA brought down Al Qaeda's leadership." Nonsense! For every ONE we cut down this cruelly, two or three appear to take their places. WE INSPIRE terror!

If the interrogations were effective, all that is left of the Feinstein report is an appeal to "our values." Even if she were to admit that intelligence was gained, Feinstein clearly believes it would not justify the harm inflicted on terrorists. She appears to believe that the U.S. should never interrogate beyond standard relationship-building, no matter the threat to American lives.

But Americans are a practical people, nowhere more so than in war. In the Civil War, Gen. William T. Sherman marched through the South to destroy civilian support for the Confederacy. In  World War II, U.S. bombs killed hundreds of thousands of civilians in Germany and Japan. President Truman used nuclear weapons to end that war. Obama has deployed drone strikes that have not only killed terrorists, but also hundreds of innocent civilians. Feinstein is not accusing Obama of war crimes, despite the far greater loss of life.

"War forces us to confront tough decisions and trade-offs. Current polls indicate that a large majority of Americans support tough interrogation measures, ('TORTURE', CALL A SPADE A SPADE, and NO THEY DO NOT!) including waterboarding, to get information from terrorists. They could have turned Bush out of office in 2004, after details of the interrogation program came to light. And as the 2014 midterm elections show, Americans remain worried about national security and terrorist threats, especially Islamic State.

Americans rely 'where the Feinstein report and Senate Democrats will not ' --on the men and women of the CIA to protect the nation as foreign dangers and disorder rise around us.

EVER HEAR THE WORD BLOWBACK?

John Yoo is a law professor at UC Berkeley and a visiting scholar at the American Enterprise Institute. (RIGHT WING OIL DRILLERS) When he served in the Justice Department from 2001 to 2003, he co-wrote memos supporting the legality of enhanced interrogation with another Bush lawyer JAY BYBEE, see BYBEE AND YOO-HOO.

Our 'POSTER-BLOGGER' is ANITA SANDS HERNANDEZ, Los Angeles Writer, Researcher,  mother of 4, grandmother of 6, also a career Astrologer and FRUG LIFE EXPERIMENTER. Catch up with her websites TRUTHS GOV WILL HIDE & NEVER TELL YOU, also The  FUTURE, WHAT'S COMIN' AT YA! FRUGAL LIFE STYLE TIPS,  HOW TO SURVIVE the COMING GREAT DEPRESSION, and Secrets of Nature, HOLISTIC, AFFORDABLE HEALING. Also ARTISANRY FOR EXPORT, EARN EUROS....* Anita is at astrology@earthlink.net ). Get a 35$ natal horoscope "my money/future life" reading now + copy horoscope as a Gif file graphic! No smarter DESTINY reading out there .

<====BACK TO TRUTH ABOUT OLIGARCHS & EMPIRE --AN ARCHIVE