Is Your Dentist Drilling for $$  Dollars? THE LITTLE SHOP OF HORRORS 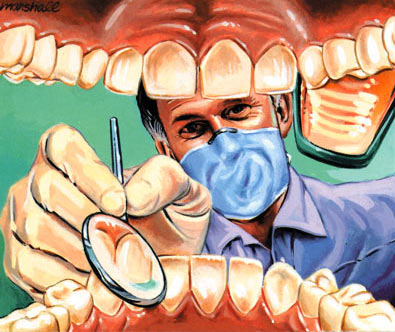 Hmmmm, there's a last dollar hiding under there, somewhere....

This happened to me, Anita Sands. I went to a dentist, he said I needed root canal when I didn't. I trusted him, had the work done for $450. Two months later, I saw his name in the newspaper, arrested for doing that ROOT CANAL SCAM  to every DAMN client that he had.  I learned that Millions of dollars worth of unnecessary dental treatments are being performed each year by guys like this schemer.  I learned the hard way. This article was ONLINE:  "One dentist told a patient she had a fractured jaw, although it was not fractured at all. The dentist performed surgery anyway, and inserted hundreds of tiny beads instead of a bone graft. The beads became infected and required multiple surgeries for removal. The same dentists has reportedly performed unnecessary root canals and other unneeded dental work. In addition to unnecessary procedures, there have been cases of “phantom billing” by dentists, in which dentists simply bill insurers for services they never performed. James Quiggle, of the Coalition Against Insurance Fraud, says there has been a disturbing spike in dental fraud by crooked dentists. An ABC News investigation uncovered dental fraud cases across the country, causing harm to patients and bilking insurance companies out of millions of dollars. http://abcnews.go.com/GMA/story?id=4162797&page=1

Some patients may expect their dentists to check for cavities during their visit, but instead, they find the dentist drilling for dollars inside their mouths. Insurance companies pay out millions annually in unnecessary dental claims.Former patients of one dentist claim that is what happened to them when they visited Alireza Asgari. They say that not only were the procedures unneeded, but they also had long-lasting effects, and sometimes difficult infections. I can remember the tool he used to slice across my gums," said former patient Karen Trowbridge. "The tears were coming down my face." She said Asgari told her during a consultation that she had a fractured jaw, which required surgery. In actuality, Trowbridge's jaw wasn't fractured. The dentist reportedly performed the surgery anyway, and instead of inserting a bone graft, he put hundreds of tiny beads into her gum line. They became infected and Trowbridge had to undergo multiple surgeries to have them removed. Trowbridge wasn't Asgari's only ex-patient with complaints. Former patient Amy Suda-Ruskey said the dentist gave her an unnecessary root canal.

"My tooth was perfectly healthy and I never needed that first root canal," Suda-Ruskey said. "It was very painful. My cheek was swollen." (And CANCER comes from that stuffing they put in tooth, it goes right down the meridian, see THE DENTAL HORRORS INDEX PAGE

"I did eventually lose that tooth and had to get a dental implant," she added. After her experience, Suda-Ruskey filed a civil suit against Asgari, which settled.

Asgari still faces dozens of other civil lawsuits, including another that was settled and three suits that are still pending.

"He did a lot of dentistry that was unjustified, and not only that, it was very aggressive, and he hurt a lot of people in doing this," said oral surgeon Richard Silberman.

The state of Pennsylvania, where Asgari practiced, agreed and convicted him of multiple counts of theft for billing insurance companies for unnecessary services. Today, Asgari is in jail and he is eligible for parole this May.

"He had their complete trust in those two hands that are working inside an individual's mouth, and he was just stealing money," said Pennsylvania Attorney General Tom Corbett. "That's all it was about."

Asgari's case isn't an isolated one.

"We're seeing a disturbing spike in the warning signals that there may be an increase in dental fraud by crooked dentists," said James Quiggle, of Coalition Against Insurance Fraud.

In fact, an ABC News investigation uncovered dental fraud cases across the country, which bilked insurance companies out of millions of dollars. One Brooklyn, N.Y., dentist wanted Medicaid to believe he filled 52 cavities in one patient's mouth in one visit.

"Everyone needs to be concerned about dental fraud," Quiggle said.

Besides unnecessary procedures, cases of phantom billing exist. In those cases, dentists bill insurers for services they never performed, which drives up insurance premiums and maxes out coverage limits without the patient's knowledge.

"I put my trust in him," said Amy Tomalinas, who settled her civil suit against Asgari for an unnecessary root canal. "Dr. Asgari hurt me emotionally, he hurt me physically, he hurt me financially," she said. Another patient, who has sued Asgari, said the dentist caused severe damage. "I had seven abscessed teeth in my mouth at once. All seven root canals that he did on me became infected," said Joe Klein.

How to Protect Yourself

Patients suggest questioning any major procedure next time you're in the dentist's chair.Mention the fact that your other dentist looked at your mouth and didn't see that, just a week ago, but his office is a little farther than you'd like to travel, before and after procedures so you came to him.... I recently told a dentist who was about to drill a bad cavity, who'd just told me he thought I'd need 500$ root canal "jeez I don't even have the rent. You will have to pull it, not fill it." He filled it perfectly without a problem. You gotta put the pressure right back on THEM!

"Don't be pressured into thinking you have to make a decision right then," said Donna Klein, Joe Klein's wife and a fellow Asgari patient. "To this day, I grab the sides of the chair when I sit down."

Also, check out your dentist with the state insurance department, or local dental board, and review the explanation of benefits letter you receive from your insurance company. Get the names of the people at that office and the exact name and location of the office. Worst comes to worst, you cooly say to the dentist, 'well I walk talking to GEORGE over at the SACRAMENTO HEALTH INSURANCE department and he said they didn't have the facts on you and they wanted me to beam back a report."

"Get a second opinion if your insurance doesn't cover it, or pay for it, or you'll end up paying for it in the long run," said Tomalinas. I say 'make out like you've got second opinions already." Most of all, trust your instincts. " But failing that, tell dentist you're gonna check with the city on him, his record. Get out of the chair and leave. Then call the city report him. See if there's a file on him in the works.

<==== BACK TO THE SHOW BUSINESS ARCHIVE. WRITERS, ACTORS DIRECTORS WELCOME