BANKER TO THE POOR-- DOCTOR MUHAMMAD YUNUS.  HE INVENTED THE ONLY WAY THE MEEK are ever going to INHERIT THIS EARTH. 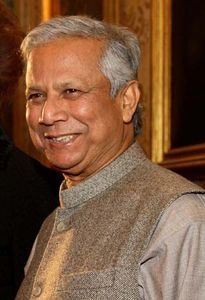 SOMETIMES things just come together so right it's EERIE. Tonight the biggest Saint on the planet MICROCREDIT INDIAN BANKER TO THE EXTREMELY POOR, Muhammad Yunus was on the Charlie Rose Show with co-guest MICHAEL MILLIKIN, --the  billionaire Wall Street CASINO Bankster who set up the theft of a million people's HOMES and then crashed the system to do it. Went to prison then made OBAMA and Tax Payers PAY HIM BACK. Both CHRIST and ANTI CHRIST on the same show!

That's like parking the GREEN HULK with Gandhi. It didn't make sense. My eyes tried to take it in.  One man sneaky, feral, head bowed, beady eyes looking crookedly out, with a hairless freakish dome of a head. Nothing in there but conniving brains and greed though the man was acting real contrite. The wolf always tells us he's gone vegan after he loses his teeth, right?

And across the table, handsome, rosy, Doctor YUNUS  who funded and founded The Grameen Bank in 1976 as a microfinance system to provide economic development opportunities to villagers in Bangladesh - particularly women. Today, Grameen has a foundation with a worldwide network that offers loans and microcredit to help people lift themselves out of poverty. THIRTY YEARS it took but Founder Muhammad Yunus was awarded  the 2006 Nobel Peace Prize.

So tonight, the Saint and the Sinner. Charlie Rose ( who must have a sense of humor or irony --deliberately picking this contrasting set of guests, ) asks Millikin in his lazy Carolina voice, 'what about those junk bonds, Mike?' (that he went to jail for.) Mike deftly switched subjects and started up on how we Americans (?) have to loan people money in America.  He didn't answer it at all!! Twenty minutes in, Millikin says that he's putting money into that Microbank. Took him twenty minutes to think that up!

I guess the lesson is, get repentant crumb bums like MILLIKIN to hang with SAINTS that walk among us to see if  any goodness rubs off. Let's see if it did this time. Call Millikin, see if he'll fund your biz idea, give you some start up cash, some seed money. And if he will then we can say that maybe bad karma produces good men and gold rubs off on brass! WHO KNEW? But I'm betting he will have long forgotten his being strong armed by some P.R. slave (who's now been fired,) for this whole idea of appearing on Charlie's show next to Mohammed YUNUS!

<===BACK TO THE POORHOUSE GOURMET & WELFARE COOKERY RECIPES

<=== BACK TO ENRON PLANET, the DOOMSDAY SCENARIO where connected, crooked CEOS charge us DOUBLE, steal from stockholders, too.

<====BACK TO THE ENDLESS WAR INDEX PAGE