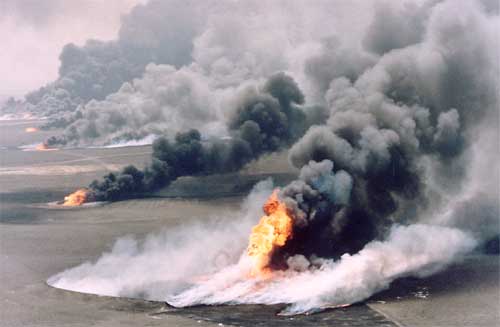 This ENDLESS WAR with IRAQ ( continued in  SYRIA and maybe soon IRAN, ) started back in 1990 when we had to destroy Saddam Hussein. Our feeble tool was propaganda: i.e. He killed his daughter's husband. He killed KURDS by gas. He 'invaded' Kuwait. Bush et cie. needed something bigger, worse. Saddam gave it to the west. Saddam made a move to invade Kuwait! Now,  Texas could crush him like a bug & GET all THAT OIL out of his OPEC hands.

At the start of all this Gulf War biz, our State Dept heard from Saddam by phone, that he wanted his old province, Kuwait, back. State Dept hears him say 'Hey guys,  I'm going in because Kuwait is drilling sideways into my land, and doing it from a province which you basically stole from us." (Brits sliced Kuwait out of Iraq's bleeding side in '28 and made it a separate state which would play oily ball with Brits).

Saddam added: 'Kuwait is illegally going way over OPEC barrel limits in sales, and with sidedrilled oil, MINE -- not even their own! And I'm putting a stop to it." Our dept of State tells him, not a problem for us, go ahead. Do it. (with a big, CROCODILE SMILE).

So Saddam moves a few tanks in and we appear out of nowhere and beat the living #%*( out of his people for the next 27 years. Taxpayers spend 3 trillion plus to make HOUSTON HAPPY. (Now you see why HURRICANE HARVEY was sent by GOD?) But you may remember this mental picture: oilwells on fire. Kiddies won't but adults will. Yeah, well WE DID THAT ! In l991, as his troops are departing, WHILE we are tractor-burying 6,000 fleeing men in the sand (burying them ALIVE), we also set fire to a (*%& load of KUWAITI oilwells which a few years ago, on  Feb 20, 2003, our GI's confessed on national radio to having done! (Read this piece called " US TROOPS BURNED OIL WELLS in IRAQ" . It'll make your eyes bulge. Some SOLDIERS WENT ON RADIO IN CALIFORNIA, confessing it. These G.I's told the MEDIA that they were ORDERED to burn those hundreds of wells!  Bush et.cie, LYING like a rug, AGAIN! TO US!) Bush Gov  secretly burned those oil wells and hung it on Saddam like the true Nazi Propaganda-ist he is and then he genocided (new verb) this  country for 12 long years. Hey, Though a lie stand for 12 years, that don't make it the truth! Bush, Colon, Dick and Kunty Sleazy (all get nicknames based on the first chakra of survival-of-self) -- this low BUSH GANG is a bunch of low miserable killers who lie and carry a standard that reads "blame the poor KURDS getting gassed to death on Saddam too!" (which N.Y.TIMES tells us last week, Iranians did, again, if you didn't click on it the two LIVE LINKS or URLS I gave you above, please read  how SADDAM DID NOT ever GAS THE KURDISH how that was a LIE too). Turns out Iran had Saran gas; they did it and that URL just above here is where a CIA whistleblower tells NY TIMES the truth!! And Bush Senior lied about the INCUBATORS in Kuwait supposedly unplugged by Iraquis, killing babies. That was proven to be a LIE too! I wonder if Saddam even killed his son -in law for betraying him. Maybe that's bogus too!

I could ONLY find TWO URLS on the internet telling how US GI's confessed to setting oil well fires. California Radio station K.U.C.I had the GI's on the air. That I heard, actually via KPFK-FM.

Our 'POSTER-BLOGGER' is ANITA SANDS HERNANDEZ, Los Angeles Writer, Researcher, Mother of 4 and career Astrologer. Catch up with her websites TRUTHS GOV WILL HIDE & NEVER TELL YOU, also The  FUTURE, WHAT'S COMIN' AT YA! FRUGAL LIFE STYLE TIPS,  HOW TO SURVIVE the COMING GREAT DEPRESSION, and Secrets of Nature, HOLISTIC, AFFORDABLE HEALING. Also ARTISANRY FOR EXPORT, EARN EUROS....* Anita is at astrology@earthlink.net ). Get a FREE natal horoscope "my money/future life" reading now + copy horoscope as a Gif file graphic! No smarter, more accurate destiny reading out there!


<=== BACK TO TRACKING THE ECONOMY, an INDEX PAGE

<=== BACK TO JERRY'S REFRIGERATOR & the Tin Foil Hat Collection of CONSPIRACY  THEORIES!

<====BACK TO THE FREE MONEY FOR POOR PEOPLE-WEBSITE