THE SECRET OF THE PETA ORG MEDIA BLITZ, HOW IT APPLIES TO TRUTH SEEKING AND TRUTH PROMOTING  ACTIVISTS --- LIKE US!

LESSON ONE. HOW TO PENETRATE TALK RADIO! How to have your OCCUPY GROUP KICK ASS!

I had just awakened, was drinking my coffee and quelle sorprise, KABC talk radio has a new gal on, and she seems very pleasant, sez how she's a vegan and her chihuahua dog is fed avocados, so she starts telling the national audience of stunned, pre-dawn folks about how PETA ads are now on billboards, with a gorgeous model holding  up a skinned fox body and a banner reading "THE OTHER SIDE OF YOUR FUR COAT," and this red skinned, animal corpse dripping blood. 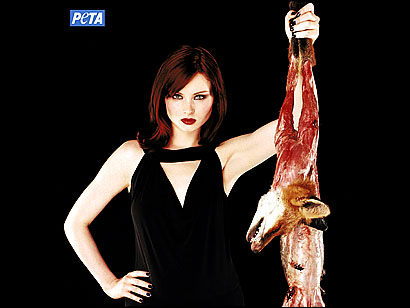 About ten of these babies and I should have me a COAT!

The radio show host details how PETA is now giving out these KIDDIE COMIX for toddlers Xmas shopping with parents, on big city street corners, inside this COMIC STRIP shows Mommies wearing big fur coats and these little angels and kitten corpses, 'The other side of your mom's fur coat," sweet little animals like your dog Mr. Buttons or your cat Miss Fluffy are torn apart so their skin is on MOMMA's BACK!? Good idea? or activist run amok?” she asks? “Listeners? CALL IN!

I hear this lady, my brain suddenly zig zags to IRAQ, God knows how at THREE AM I CAN MAKE such a leap on just one cuppa coffee, but am getting some very good beans these days, so inspired, I just dial the number get the screener, (!) say "I want to talk about the PETA ad... and within seconds ---as if nobody ELSE in USA is awake, calling in, I get right on the air, on nat'l KABC! Talk #*(%*# Fascist RADIO!

"Hi I'm Anita in Hollywood, well I have 4 kids and I wouldn't mind if my kids were handed issue driven gory PETA ads disguised as comic books! THE GAL BLINKS. "See," I continue, "parents rarely go that way, rarely expose their kids to the harsh realities, even those they believe in...I know I didn't expose my 4 kids to any of my political interests and I was picketing everywhere outside federal bldgs and today my four are veritable CABBAGES, unpolitical, unaware, totally duped by corporative propaganda and talk radio shows that say go kill everyone in Afghanistan and Iraq cuz maybe Saddam has weapons when he doesn’t have them, right? Or cuz maybe these Iraquis are Osama terrorists when it’s known to be Saudis our so called FRIENDS…”.

“I mean some parents might get ired at the way this COMIC BOOK was slipped to their toddlers but I'd be grateful! I'd even like them to do it about politics like 'here's what corporative plunder of Enron and the Nasdaq crash does to the dollar and GATT treaties do to export your job…..and what joblessness will mean to your children and grandchildren and how BANAL the profit motive is that leads OIL MEN to create a war ostensibly to get Osama but which ends up killing l00 thousand Iraqui, Afghani women and babies, torn to pieces and skinned in dirty, collateral bombing, I mean try carpet bombing Afghanistan and NOT killing hundreds of thousands of caveman third world peasant children.. and just go steal their oil.... and our own boys, a thousand of them too and many more thousands wounded. Well, those horrorific truths aren’t too different from the REAL TRUTH of a fur coat in a way..." I paused to breathe.

WELL that woman went wild. She was no vegan she was a freakin' facist propaganda-ist hiding in a vegan faux fur coat! And she PROMPTLY stated that Saddam had killed hundreds of thousands, the popular lie as so many soldiers of US forces defected and told us the alt truth. I however wasn't fast thinking and when she heard a stunned silence, she rang me off with A BIG CLICK!

I wanted to go on to go into detail about how SADDAM had been badly propagandized, that the SHAH had killed many more and he was our boy, we took out a democratically elected president MOSADEGH to install this REPRESSIVE GUY who literally caused every MULTIM TO HATE US THEREAFTER but I couldn't remember the data well enough. You wouldn't make that error. Once you read it, you'd remember on what radio show those Ex G.I.s appeared, what they said about their having to set fire to all the oil wells in Kuwait and blame it on Mame.


I also would have liked to say something about how useful talk radio and the internet are as teaching forces for our children, who will not really let themselves be programmed by parents. Carlos Castaneda (who I knew once) had told me once (when I did his horoscope) that as we parents will never talk turkey to kids NOR WOULD THEY ACCEPT IT FROM US, (his theory!) we gotta bring in the hallowed DON JUAN FIGURE, some scary, ancient, wrinkled curmudgeon truth teller who will take the kid for an outing one day but not to ice cream parlor or movie matineee, no sirree! To THE morgue and the pediatric cancer ward! His very words exactly. But I'd say the INTERNET would work, or talk radio. So that's why we all have to wade out there in the website marsh and learn URLS and be able to cite them on the air. I want to hire myself out to mothers, turn into one of those curmudgeons who should take may pals' kids Xmas shopping at the fur store, and maybe even run those Iraqui newsreels as videos, or maybe point out the SAKS FIFTH AVENUE ORGY of spending that leaves parents unable to afford taking their kids to ACAPULCO over Easter vacation....cuz that's certainly a reality you have to expose kids to, THE PARADISICAL nature of certain spots outside the capitalist reality, the smoggy city and the forty hour week framework.

Now, it's said about taking kids to church: "Inoculate them when they are young and you prevent them from catching the real thing when they grow up." Another man said: Enlightenment cannot be attained, nor forced. It can only happen… It can appear only when it is given a vacant space to appear in. Do you want to hear how I got inoculated? Pal took me to art exhibit of Guatemalan Indians only interspersed with folk art were huge B&W photos of genocide done by CIA in Quiche province where every village was flattened, every man, woman baby and even dog, murdered. I signed up and became a NISGUA activist, later CISPES, did so during 70's. One art show.

Still, as an art crazed lady, I wanna get my hands on a PETA kiddie comiX book! Street theatre agit-prop like that is a collector's item at this point in modern history. So when you see this cyber trend toward raising huge amts of cash to put socialist, leftist, reformist, evolutionary ads in newspapers. they run one day and cost 90k always bring up Cyber piracy! Get them thinking of agit-prop, not big newspaper ads. To somebody I guess that seems like a good idea. but I think how long a nest of cyberactivists or street theatre postermakers could make that 90k last and for what endless vivid street theatre!

ACTIVIST SCHOOL told us THAT GOOD MONEY that we raise SHOULD GO FOR newspaper ads! I disagree! Spend a few hundred on a printing press, lithography silk screen, spend it on ink for colorful silk screen posters, glue brushes, a big bucket of glue and make agit prop art. Then, make friends as you drive around the city at night. visit cafes, to get warm. enlist new members. get a life! everything we are about is about life and not putting 90 grand into facists' hands! BE ARTISTS, PIRATES, Pioneers, be living room groups, be night street people. Be avatars. Be anything but cash swilling media bores addicted to CABLE, reality TV, CELEB GOSSIP and sucking up to other activists for a buck for a one day newspaper ad when SOME PLUCK would be more interesting! A one day ad? 90k? Try 90thousand ads running a hundred days of spring rain, summer heat, on a street corner? Or a hundred performers in a street picket with placards, costumes cymbals and bells?

Hey speaking of which, just heard from George Harrison's personal, lifelong healer that the BEATLE gave THIRTY MILLION BUCKS to the Hare Krishna and I know that SOROS gave about the same to the MOVE ON dot org so FOLKS WHO HAVE chutzpah, who work in this trench, hoe this row who give information bliss, ecstasy and deliver the info will attract the super rich evolutionaries WILL get back all they invest. In time, money, blood, ink, etc. glue brushes. Maybe it's your own truth/info website you point listeners to. Or, for the time being the raticals at the rathaus webpage. But point thousands a week to the truth. That's the thing that will save the planet. Get on the radio. And to get there, be a little more informed than I WAS! And HAVE THAT SECOND DAMN CUP OF COFFEE!

Our POSTER is ANITA SANDS HERNANDEZ, Los Angeles Writer, Mother of 4 and career Astrologer. Catch up with her websites  TRUTHS GOV WILL HIDE & NEVER TELL YOU, also The  FUTURE, WHAT'S COMIN' AT YA! FRUGAL LIFE STYLE TIPS,  HOW TO SURVIVE the COMING GREAT DEPRESSION, and Secrets of Nature, HOLISTIC, AFFORDABLE HEALING. Also ARTISANRY FOR EXPORT, EARN EUROS....* Anita is at astrology@earthlink.net ). Get a 35$ natal horoscope "my money/future life" reading now + copy horoscope as a Gif file graphic! No smarter, more accurate career reading out there!

<=== BACK TO THE METAPHYSICS of AWAKENING WEBPAGE

<=== Back to the WEB TIPS SO that I CAN DO AN ACTIVIST WEBSITE MYSELF!

<===SEND ME TO THE MISSION STATEMENT OF A GOOD ACTIVIST

<===Back to the ACTIVISTS’ page

<=== BACK TO JERRY's REFRIGERATOR, & THE TIN FOIL HAT COLLECTION OF CONSPIRACY THEORIES