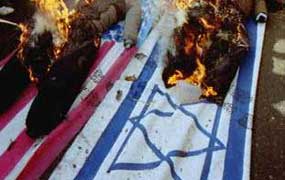 We wonder why the Muslims have gone wholesale crazy. Theories of jealousy are proffered, like ...having the Israelis move back into  to the original area of Judea (which was theirs before 79 AD,) was like having BEVERLY HILLS move into CULVER CITY. Le Muz have to stare at Beamers and lush apartments, women in rubies and pearls and kids with educations creating SOFTWARE the world actually wants to buy and hey, glorious fields where mankind actually mastered the art of the drip irrigation pipe. ALL THOSE LUSH GARDENS would drive anyone stuck in the dust a bit dippy. Also, Jews figured out plumbing and baths and ACs and IRRIGATION  Jewish fields flourish. Sabras get 500 pounds of dates on a tree where A-rabs down thru time only get 38. But getting THIS CRAZY over it and wasting time getting killed and every time their SON stabs someone, the whole family has to get out of their HOME and the ISRAELIS BOMB THE HOUSE FLAT! But hey, they hate the ISRAELIS more than they love their own homes and kids, to whom they'll strap bombs? GIVE US A BREAK.So I cast around for theories of madness.

A.) THE STARVED CARBURATOR  THEORY. MY mechanic solved the whole Middle East problem when he noted that the reason my car runs great in AM and at NITE AND LOUSY DURING THE heat of the DAY IS THAT HEAT makes for less oxygen in the air. Arabs for the main have no oxygen. They're all like cars with bad carburation.  For a few minutes they maybe have the shade of a camel. The UNITED NATIONS should just give war torn sandy nations AC's and OXYGEN!!!! A HONEYWELL ON EVERY HUT!  (Scientists tell us this is true: the desert atmosphere....the opposite of the Niagara Falls effect.  People go to Niagara Falls for the natural honey moon effect of the abundant negative ions.  It mellows people out, making an argument nearly impossible.  The desert is a high positive ion region, which has created cultures that are overly yang, where macho tyrants disparage women and children, all of which makes bellicosity inevitable.

B.) THE TOO MUCH NUCLEUS FOODS THEORY - A decent diet for a relaxed (or stuporous citizenry is somewhere between comfy and total ZONE OUT. The standard Amurican Diet is built around certain known-to-be-stupefying products: Quarter pounders, (MEAT & grease), starch, tryptophane, MILK and poultry all of which when consumed together are nicely sleep producing. They relax. People who just eat bird SEEDS get too much nucleus. They're over the top. That frenetic jabber you hear in the Arab marketplace? SEED POWER. You hear it in squirrels, birds. (click to see squirrel diet adapted for humans,) Nature's wealth (found in beans, seeds, sesame tahini, those vegan products,) is all ARABS chomp on. THE DROSS is actually what we big city folks eat. ERGO these hapless vegans are out there percolating in the desert heat like plugged in coffeepots but again, without much oxygen. (!!)

C.) BATTERIES. The invention of the radio. You think Bill O Reilly is trouble, their Mullahs scorch the airwaves. These towelheads are getting agitprop 24/7 out of their transistor radios. Don't bomb the buildings where terrorists live, Take away their mind food supply, the transmitting stations! Or make batteries ILLEGAL!

D.) LACK OF FORESKIN. Arabs are deeply troubled by surplus population. Take away the surplus kiddies, you get no war. Thesis being IF YOU HAD ONE SON, You wouldn't want your kiddies to fight no #%*&*# war. But when there are ten? Little war won't hurt. SUB-related to this is the issue of CIRCUMCISION. CREATE a sunburned kind of DRY surface down there, you totally take away the POWERFUL sensations and ADDICTIVE fun of MATING. Jews aren't sex junkies. No foreskin. Foreskins keep things down there permanently lubricated and sensitive. Dr. feelgood. ELIMINATE foreskins, you immediately take away the nightly FUN session beckoning and the surplus population. BOOKS become more interesting than FOOLING AROUND. Leave it to the Jews!

3.) FASCIST TRICKLE DOWN - Other things to ponder if you're of Anthro-Economic mind or scientific bent. Air conditioners and CIRCUMCISION are not in the interests of the WAR TOY MANUFACTURERS! As long as Arabs are running around shooting the area up, using boxcutters to down skyscrapers, DOUGLAS AND G.E. and NORTHRUP make bank. AC's and circumcision would just stop the war dead. No one with a dry dick or a dry forehead wants a war. BUT HOT, MOIST breeding, sweaty, burnt out ARABS want nothing else! 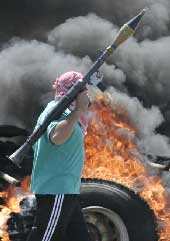 Give the middle EAST AC's and circumcision, SANITY would immediately break out.

E.) AMERICAN TV SYNDICATION. This is aggravant number one, don't know why I put it last. When folks using half coke liter bottles for shoes catch reruns of DYNASTY, watch out! (see below) 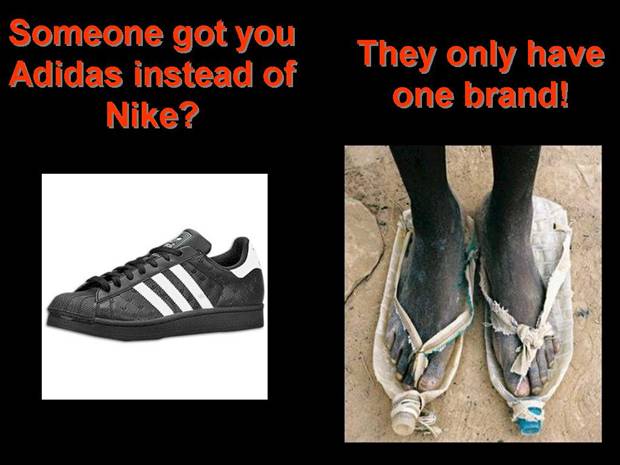 F.) MEDIEVAL MIND. This just in from a very intelligent girl friend and it's a good theory. The lack of a Protestant Reformation in Islam. It's like they're completely in the Middle Ages, so they live by superstitions. Muslimism, straight from the can, was rife with the occult  hunches of the average Dark Ages person. Not a shame, just a sitch that needs a bleedin' fix. Where is Martin Luther when you need him?

H.) MACHO UMBRAGE due to COMPETITIVENESS - The same gal pal offered the theory that perhaps it was humiliating to Arab men to have Jewish men beat them in so many wars in the last four decades. She continued: " I think the part that makes the Arabs nuts is that the Jews have been persecuted, tossed out of countries, blamed for everything, forced to wear silly-looking hats (Italy). The popular idea of a Jewish man is more Woody Allen than Sandy Koufax. So it's kind of like when the macho Arab men get beat by the Israelis, it's like saying you lost a fight with the guy who plays Mini-Me."

I.) GENETIC MEMORY - My friend the BLUES Musician Yoga Teacher said: "This goes back to Abraham and Sarah.......Remember....Sarah was too old...so Abe had a child with his servant Hagar...........then a miracle happens and Sarah gets pregnant..........her sons got the inheritance.......Hagar and the boy were tossed out to die on the desert. She survived but that son was the ancestor of all the Arabs...........They have been pissed off ever since. And it's not just genetic memory, it's environmental as they keep telling that story to themselves." Ah yes, I know that one. It's the same reason the Irish are depressed and drink. UK ignoring them during The Great Famine. Half genetic memory, half folk tales of victimization.

Any ideas on what causes insanity in Arabs? Write astrology@earthlink.net where you will find
Anita Sands Hernandez hanging out. Ms Sands states that she is not responsible for the ideas found in her brain or on her websites.  LUCK IN LOVE   (a site for stupid but stupendously pretty GIRLS that teaches them  how to MARRY REALLLY WELL, like giggillionaires --- and the site "HOW TO USE METAPHYSICS TO GET AHEAD" --- and site "GUERILLA CAPITALISM FOR DUMMIES". or there's FRUGAL LIVING 101. and THE GET UP TO SPEED ON REALITY website..This woman is a hoot. A channel for wild ideas. though she ascribes all those concepts, visions, words, ideas and descriptions to Supreme Serendipity.

Our 'POSTER-BLOGGER' is ANITA SANDS HERNANDEZ, Los Angeles Writer, Researcher, mother of 4 and career Astrologer. Catch up with her websites TRUTHS GOV WILL HIDE & NEVER TELL YOU, also The  FUTURE, WHAT'S COMIN' AT YA! FRUGAL LIFE STYLE TIPS,  HOW TO SURVIVE the COMING GREAT DEPRESSION, and Secrets of Nature, HOLISTIC, AFFORDABLE HEALING. Also ARTISANRY FOR EXPORT, EARN EUROS....* Anita is at astrology@earthlink.net ). Get a free natal horoscope "my money/future life" reading now + copy horoscope as a Gif file graphic! No smarter, more accurate DESTINY reading out there!