My Parents Managed to Raise Two Kids on One  Salary.
That's Impossible Today -- What Happened?

By Jared Bernstein Director Economic Policy Institute  in Washington
NOTE:  EPI is funded by FORD and is pro - NAFTA.
Consider it a Propaganda Group.

My dad had a full-time job, but my mom didn't, and they managed to raise, feed, house, and educate two kids on one salary. We can't do that today. Why not? What happened? What happened was that the real earnings of lots of people, mostly male people, so husbands in this case, started to slip. At the same time, some of the very costs mentioned -- a home and a college education -- grew a lot faster than average inflation. That's bad. Also, over the last 30 years, the job market has opened up much more for women, who have made impressive gains that have helped to offset their husbands' wage stagnation. (If she works!) That's good.(who sez? Ford Motors?)

Gosh it's nice to stay home and make our own clothing while
Dad works at one job and pays for our house, our doctor bills
and still has money left to stash for Susie's College Education.

This guy just told us the situation is GOOD. Hey, he works for FORD MOTORS. They've lied to us before. In fact, at 100,000 miles, every part on a Ford vehicle is FINISHED!. It's not always good for the wife to work full time. What about children? An inner life based on woman's touch? Moral values? Communication between the generations possible only when someone who is a loving mentor and a beloved one at that, --- is with the kids full time?  Our EPI expert goes on

"But it also means that family members are spending a lot more time in the job market. That's bad, or at least it's stressful. There are three problems here and one positive development. 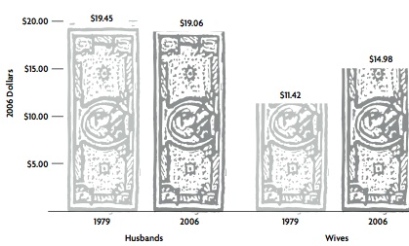 The hourly earnings of some men -- and not a trivially small group -- have done poorly over the last few decades. (POSTER: "POORLY??? THAT'S MINIMIZING IT !) As shown above in the graph, the typical married man in his prime earning years, age 25 to 54, saw his real median wage fall a couple of percent from 1979 to 2006. (POSTER: LIAR LIAR. IT FELL BY HALF! GRAPHIC IS AN OUTRIGHT LIE! )

" His female counterpart made a lot more progress; her real hourly wage rose 30 percent, and she also worked a lot more hours. And if we cut the data a little further and look at husbands with at most a high school degree -- and only a minority of husbands were college educated over these years (16 percent in the mid-1970s; 30 percent today) -- we find a real wage loss of 8 percent over these 27 years.

THIS REAL HOURLY WAGE thing is SUPPOSED to show you the buying power of the dollar. This graph does not do that. If a man can no longer pay for health coverage, a house in the burbs, a wife and kids and their college education, this is obviously a LIE FRAMED IN A GRAPH!

Our expert goes on "But before you spouses out there start humming "Hit the road, Jack," recognize that it's not their fault. These men have been caught in the crossfire of a set of trends that have ripped the bottom out of their earnings capacity. The loss of unionized factory jobs has meant the slow bleed of high-productivity jobs in a sector where these guys had some bargaining power -- clout that enabled them to channel some of that  growth into the household.

The fact is, when a man goes from making stuff to providing services, especially a man without a college degree, his wage falls between 15 and 20 percent, and he loses most of his fringe benefits. What explains a loss of that magnitude? It's not just the difference in the efficiencies between the two sectors, the so-called productivity differential -- the fact that services create less value added per hour than factory work. It's also that there's a lot more wage inequality in services, and when income grows in that sector, it tends to flow to the top.

That's where you most clearly see men's loss of bargaining power playing out; and outside of the public sector, unions have been hard-pressed to get a foothold in services. Wal-Mart has shut down operations rather than entertain the possibility of their workers forming a union.

At any rate, given that most of these men were working full time, full year, families had one (legal) strategy to undertake if they wanted to offset those negative male wage trends: more work by wives.

The increase in women's participation in the paid labor market over the last 40 years is widely appreciated as a huge change in our economy, our culture, and our families. Back in the mid-1960s, about 40 percent of women worked; in 2006, it was about 60 percent. And, while gender wage discrimination was and is a problem, women have made important gains in education and experience, and some have successfully penetrated barriers in high-end professions like law and medicine.

The wage differences noted above are dramatic, and working wives, for example, have more than offset husbands' losses. My own research has shown that in the absence of wives' added contributions to family income, the real (inflation-adjusted) income of middle-income marriedcouple families with kids would have gone up a mere 6 percent between 1979 and 2000, a barely noticeable advance of 0.3 percent per year. Instead, it was up 25 percent (1 percent per year). That's the difference between stagnation and rising living standards. My guess is that families like that of the man who asked this question looked at the lay of this land and recognized that if they wanted a better life for their children, they were going to need to spend more time in the paid-job market. The men were topped out, already working full time, full year. And the upside is that working women were both taking advantage of increased economic opportunities and building some important economic independence. But consider this. Husbands in these families were already working full time, and that hasn't changed much at all. Wives, on the other hand, are working more weeks per year and more hours per week. (JERK! THEY ARE working FULL TIME!) In fact, they worked, on average, 535 more hours in 1979 than they did in 2000, the equivalent of more than three months of full-time work (they went from about 850 hours per year to about 1,390).

That's one source of the squeeze that working families are talking about these days. You could write a book about that too, but let me summarize very simply: It's a bitch to balance work and family when you and the spouse are working one and three-quarters full-time, full-year jobs between you. (Try TWO FULL JOBS, MR. EMBROIDERER!) It can be done, families do it every day, and we should never downplay the empowerment endowed by greater economic independence. But it's exhausting.

What a fun way to spend our day, Susie.
We get to have the house sparkling and
dinner made from scratch for when
Daddy comes home. Some things are just
better than two wage slave parents away all day.

When people talk about the middle-class squeeze, what they're really saying is that their paycheck isn't going as far as it used to. Now, economists (like me) who look at overall inflation and compare that with incomes often miss what's at the heart of these concerns, and at the heart of the question we're parsing through: Your income can be beating overall inflation but falling behind on some highly visible and very important areas of your budget, your life, and your perfectly reasonable aspirations. Over the past decade -- 1996 to 2006 -- overall prices as measured by the Consumer Price Index were up about 30 percent, a pretty typical rate of price growth. But the costs of child care and nursery school rose twice as fast -- they were up 60 percent. College tuition: up 80 percent. The price of the median homedoubled over those years, from $110,000 to $220,000 (of course, there was a bubble at work here. Health premiums -- the monthly amount that families pay out of pocket for employer-provided coverage -- also just about doubled, from $122 to $226. Obviously, if these goods and services are outpacing overall inflation by a country mile, other goods are diving in price. And yes, if you've shopped for a DVD or computer lately, you know what I'm talking about. Computer prices are down 86 percent!

Here we have the other answer to Bob's "What happened?" While economists blissfully celebrate the price declines of cool shiny new stuff with keyboards and remote controls, some of those clunky old things that kind of get us through life, the stuff for which we write checks each month-mortgages, health insurance premiums, child care, the kids' college-saving account (if we're lucky) -- have been costing a lot more, and, even for many upper-income families, their prices have been rising more quickly than incomes. Don't get me wrong: It's great to be able to buy an awesome computer or sound system for pocket change. They're very entertaining after an exhausting day of being squeezed by everything else.

What this man is saying is, --put the wife to work TOO and you can maybe  get together a down payment on a CONDO.. Maybe health insurance if your boss cooperates with co-pay but for the kiddies, only public school and city college. THESE are, however, things that ONE working father could pay for back when! There was no health insurance, we just went to the doctor. That system worked WHAT HAPPENED was, the OLIGARCH/ BANKS and BOSS figured out how to tighten the screws on everything, parking fees, DMV fees, food costs, housing, health, insurance and a TIDAL  WAVE OF TAXES,  LICENSING FEES and penalties plus OBLIGATORY car INSURANCE. The accumulative effect: the worker's nose is just above water. He is stressed, his children uncared for.

Jared Bernstein is a senior economist and director of the Living Standards Program at the Economic Policy Institute in Washington D.C. He is the author of "Crunch: Why Do I Feel So Squeezed?" (Berrett Koehler,  2008). EPI is funded by FORD and is pro - NAFTA.

Our 'POSTER-BLOGGER' is ANITA SANDS HERNANDEZ, Los Angeles Writer, Researcher, Poster, mother of 4 and career Astrologer. Catch up with her websites TRUTHS GOV WILL HIDE & NEVER TELL YOU, also The  FUTURE, WHAT'S COMIN' AT YA! FRUGAL LIFE STYLE TIPS,  HOW TO SURVIVE the COMING GREAT DEPRESSION, and Secrets of Nature, HOLISTIC, AFFORDABLE HEALING. Also ARTISANRY FOR EXPORT, EARN EUROS....* Anita is at astrology@earthlink.net ). Get a FREE natal horoscope "my money/future life" reading now + copy horoscope as a Gif file graphic! No smarter, more accurate career reading out there!

<==== BACK TO THE ECONOMIC CHANGES WEBPAGE