REST IN PEACE NETSCAPE, ONCE THE
MOST BEAUTIFUL BROWSER IN THE
WORLD, -- LIKE A GREEK TEMPLE! 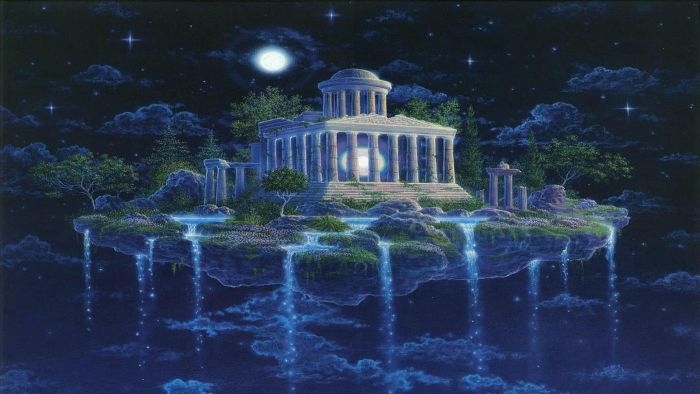 From the very first day I entered Cyberspace in 1994, I was accompanied by the
Beautifully designed NETSCAPE BROWSER. Like a temple in Ancient Greece
or Rome, it was destined to become The KING OF MOUNT OLYMPUS, GOD HIMSELF,
then, 4 years later, DOWNED BY SATAN, GREEDY BILL GATES, bullet holes dotting its columns, it became
an elegant relic that the CITIZENS would abandon  https://www.engadget.com/2014/05/10/history-of-netscape/
in Cyberspace to crumble to dust. A relic--- only as the murder was going down, nobody told its users.

I didn't know at that time that Gates had murdered it out of sheer jealousy until in 2019, I saw National
Geographics Docudrama, "VALLEY OF THE BOOM." ( See it for free on your PC.
https://www.nationalgeographic.com/tv/valley-of-the-boom/?cmpid=org=ngp::mc=cpc::src=google::cmp=votb::add=googlecpc

FOR YEARS after it collapsed, we were like mice playing in the ruins, the Halls of Netscape Vers 4
were alive with users. It jammed, coughed and we rebooted. DOWNLOADED NET 4.7. It jammed, BILLY'S BULLETS
jabbing its flanks with BYTE BLEEDING GLITCHES. Then one day it wouldn't boot up. Billy had killed it. WINDOWS
was like a bio poison in the air, suffocating COMMUNICATOR.


Ever had a PC software or hardware crash and ensuing panic? I just had two
straight days of it in the wake of my relic not FUNCTIONING ANYMORE!
As I'd just posted an article on HOW WE AMERICANS CAN EASILY DO
A 1776 REVOLUTION all over again, I thought that was the cause! I'd been
HACKED by the NSA/CIA . Definition of a DEGENERATED NARCISSIST is, they think
everything bad that happens HAS TO DO WITH THEM, THEIR ACTIVITY, and
who could be doing the spying? CIA, NSA is the most frequent paranoia.

OR RATTING OUT BANK OF AMERICA for their CORRUPT FEES, I did
that too. http://www.masterjules.net/bankofamnesia.htm
We curmudgeons offend a lot of people. So maybe they hire hackers.

Or was it just that the NETSCAPE  BROWSER CORP  stopped supporting
to do AOL and get revenues and nobody has the story online yet.

There's now this massive weirdness in the NETSCAPE BROWSER, .. the fact
that its front page jams stony frozen, you can no longer SURF the net with its
NAVIGATOR, it jams if you ask it to go to GOOGLE. You can no longer edit
preferences. Any version of the netscape sisters 4.75, --4.78, ---4.79... even
young sisters like 8 and 9 --- once freshly downloaded JAMS the same way.

MICROSOFT OS has been redesigned to attack like a puff adder.

I de-installed each version like a brigade of fired chorus girls,  re-installed a different
version, but the same glitches were in each, fresh downloaded yet freshly glitched!

I went thru this many times, de-install, is that the word? Reinstall a new
one, fresh off the net. All were glitched in the same area! It won't let your
receive big EMAIL, it jams if there's coding in 'em.  But sending email is OK
And you can't EDIT PREFERENCES any more, so to me, and it won't allow
me to look at my own articles if they have too many slow loading graphics. So
that sounded  like a HACK from the outside, not a glitch.

Downloaded the 15 mil program, the 22mil. None would give me my homepage
GOOGLE as I wanted, they'd SLIDE automatically to NETSCAPE and then TO
PROPELLER NET a PAGE 404 ERROR PAGE, THEN freeze.

THE MAIN PAGE slides from netscape.com to propeller.net and a 404 and total
jam. When jammed, the ONLY WAY OUT is control alt delete twice and then hit
BYE BYE. and you sink down to your desk top, barely breathing.

So that's why I started to believe this was "BROWSER WARS" or something, some
sabotage to the NETSCAPE webpage off the frigging WINDOWS OS hold on the entire
internet  so their parent corporation AOL could send you whatever new browser they're peddling. It was logical.

Sorta like the DIGITAL CONVERTER BOX and an AERIAL 100 bucks to get NO TV at
all, http://www.masterjules.net/hoaxtv.htm  forcing you to buy CABLE SERVICES.
TimeWarner-SPECTRUM must have been offended by that article and maybe THEY sent the hackers---

So I kept looking for an IMMUNE version of NETSCAPE with my free
DOWNLOADING software talents, INSTALLING VERS.. 4.79 4.78, then 8 and 9,
haha, so-called newer versions? ALL were JUST USELESS. AS IF A HACKER
in Herndon Virgina HAD them all BY THE COLLAR and were strangling & yanking
them behind the curtain stacking up the bodies one by one.

I had a Pegasus Mail on my desk top, no Greek temple lemme tell ya, it asks you


questions you don't know the answers to, the path, the whatever, but I don't know
coding, Earthlink net smapauth server codes bewilder. Gad, what coding? What language? What
words?  Had nothing to consult to find out what those mail paths were. So that was a wrong turn.

Tried out the most primitive NETSCAPE BROWSER, 4.51 from mid
nineties, first one I'd ever used in 94 or so. I stepped LIGHT! Real quick in SET UP,
I imposed one thing  NO ADDRESS AT ALL IN MY BOOT PAGE please.
That helped. No longer did it try to leap from BOOT up PAGE to PROPELLER 404. Now, I HIT MESSENGER its built in EMAIL.  Went to MAIL 2 WEB.COM and sent myself a message. As long as I kept one message in there and clicked on it fast, i could keep the MESSENGER OPEN and working.

I CAN SEND messages as long as there is ONE SINGLE MESSAGE there to hold it
in place. So I sent myself a message NOW IS THE TIME FOR ALL GOOD PEOPLE TO LEARN TO WORK WITH A DICEY NETSCAPE BROWSER! and keep it there, never erasing it. However, I CANNOT "GET" EMAIL there from others as it jams. It can't read coding, java, just my
plain one line message to myself. Means I have to use MAIL2WEB to get mail, using MOZILLA FIREFOX browser to get to that website.

I've learned to watch tv holding an aerial over my head, to deal with Social Security cutting my fat 342$ pension check down to 285$ I can learn to live with no email coming IN but the bigger problem, I CANNOT look at some of my htm articles. IN NETSCAPE's HTM COMPOSER. If too many graphics, IT WILL JAM. BUT I was able to DO A NEW ARTICLE and add a graphic. THIS ONE HERE with Temple at the top for instance.
But my regular weekly star column, all those graphics in a 330k byte file,
ten, twenty PHOTOS in it? OR DRAWINGS/ GRAPHICS? cannot touch it with this
browser. IT FREEZES. So I have an allergic browser. I can live with that until I get a new PC up and
running. Have a DELL in a box somewhere here, brand new. Damn thing has no 3.5 floppies
so I couldn't load it except with freeware found online.(NOW YOU KNOW THIS PIECE WAS WRITTEN back in 2001
and today  in 2019 I FINALLY LEARN BILL GATES DID ALL THIS DAMAGE TO US.)

The venerable NETSCAPE BROWSER WHICH I DRIVE NOW  in 2001 (even with bullet holes) orig came with:

#1, A BROWSER for surfing. Yet it no longer will surf anywhere. That part
is dead. So I have mozilla for that, I'll live. Netscape always was
temperamental in that area, crashing at java or coding.

#2. An HTM or text COMPOSER for doing HTM files with graphics. Like  Microsoft word but BETTER
as it is CODE BUDGET WISE means NO HAMMY, MEATY, EXTENSIVE & EXTRANEOUS
CODING TSUNAMIS! HTM COMPOSER won't handle DOCS. BUT I AM A NET WRITER so who needs DOCS?
I write stuff, post it online. I am going to post an HTM verision of this
letter at my WEB TIPS SITE http://www.masterjules.net/webindex.htm with a
graphic of me, prostrate bleeding from all orifices. Sweating nails. Crash panic. A GATES VICTIM.

#3 THE MAIL SECTION which first had An address book that held names, bios,
fones, and the inbox which I'd moved to C:\BACKUP directory at first sign of trouble
Four million bytes of emails with movie star rock star clients  they're fun.

#4 A list of emails received (many copies of what I'd sent and bcc'd to
myself,) four yrs of em, and the ABILITY for me to collate by subject,
date, by name of sender, practically collate by the ideas.OR HEADINGS.
NOTE:  in 2019 NO EMAIL CLIENT CAN DO THESE THINGS.

#5. The"MESSENGER section of the EMAIL for doing letters, email. That one
is diced now, too. JAMS STONEY COLD DEAD on the average letter that comes
in. So I can never let my fingers do "GET MSEssAGES! Not ever! ONCE JAMMED
the only way to fix is GO INTO DOS, go into the INBOX and erase, line by
line. You'd rather wait in the DPSS waiting room with no food, lemme tell
you! SO  Old habit, --GET MESSAGES, --have to break it! have to make do with
MAIL-2-WEB for receiving all letters. NOTHING can come here. I feel like a
teen, no visitors allowed.

SO WHY USE NETSCAPE AT ALL? It sends better letters by an increment of l00
over GOOGLE CHROME OR FOXFIRE. They are practically NET READY! I can format them in
composer and turn it into an article. I turn a lot of mail into articles. PORTAL TO THE 7,000 ARTICLES WRITTEN

CANNOT do that OVER at MOZILLA. Besides mozilla wont let me send emails. it
jams. Cuz it isn't prompted right as i don't know the ingoing outgoing codes: smtpauth
and POP something. Also it's not the default browser or mail client and it seems to
KNOW IT and is in a permanent snit about it.

I've been sorting it all out for two days of panic. I even complained to a pal who's
married to a govnm't programmer saying 'your husband kept my software discs, the exact software I need now,
remember? A year ago when I had that PC open on his office desk  The one which he never
fixed. Yeah he kept or PURLOINED some discs --- beauties, vintage stuff. Netscape 4.75,
a WINDOWS 98 OS which I need to reinstall every time it crashed. I used
the word ABSCOND and BRUTE. SHE GOT FURIOUSLY mad at me  The upset ended it all,
a crash panic that leaves you weak in the knees. But what don't kill ya
makes ya stronger, right? Just doesn't make your PC STRONGER is all. And theft really ruins friendships.

P.S. I wrote this posted it and then found an old version of 4.75 in my closet
on a cd and I got that Netscape to work fine. ( I WROTE THIS in 2001, but re edited it just now in JAN 2019).
THE EMAIL POWERS were the ones I wanted back. Offering collation by date, size, name.

IN 2001 when I played with getting the corpse to stand up and yell, I didn't open just any ole email  letter
as many jam it, I have to reboot the browser, but I open emails in mozilla FIREFOX
using mail2web.com to get rid of half million and up byte files, spam there, then
allow the email to come into NETSCAPE. If any jammer gets in, I go into
dos thru ZTREE, go into INBOX and edit OUT that  offending email.

PS. Now in 2019, I use Two browsers, THUNDERBIRD & Google Chrome with Windows 10 and hey, I'm OK. But both THUNDERBIRD
and GOOGLE CHROME have badly lacking email client tendencies. NOT INTUITIVE, THEY LOCK UP
addresses where you can't see them so you click BUCK  you get BA or BE or BI BUT LIST IS SHORT, NO BU. NO WAY TO GET TO THE BU's.
SO I FORGET old friends as their name is BURR. And they forget me.

This RIP piece you're reading is just to venerate an ancient structure of beauty, value and use. And tip current day
architects to try their hand at something a bit spiffier than Google Chrome.

<=== BACK TO WEB SITE SAVVY FOR UTTER DUMMIES