White House, Congress extend police-state FISA law FOREIGN INTELLIGENCE SURVEILLANCE IS REALLY ON US!!!!! Watching what we do with our computers, our cells, mobiles, phones, texters and spying on us from the sky drones outside our windows, and using CCTV on every street corner. 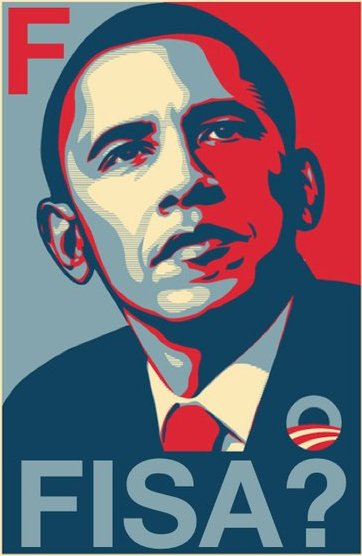 OBAMA rigged a lopsided US Senate vote back in 2012 that proves he's DEEP STATE all the way. This vote was conducted with virtually no media attention. It renewed a law first adopted in 2008 that said the GOV could do anything to ANYBODY who was suspected of being an anarchist. The same Justice Dept pair of bozos that okayed TORTURE for BUSH CHENEY, Dumb and Dumber lawyers Bybee and Yoo... OKAYED it, said JAIL WITHOUT WARRANTS EVEN TORTURE ON THE RACK was constitutional.

They also retroactively authorized illegal spying by the National Security Agency (NSA) on the e-mail and other Internet-based communications of tens of millions of people, both in the United States and around the world. THE FISA AMENDMENTS Act of 2012 passed by a 73-23 margin, with large majorities of Democrats (31-20) and Republicans (42-3) supporting it. Four amendments that would have imposed restrictions on NSA spying or required the agency to account for its operations were defeated in roll call votes.

The Republican-controlled House of Representatives passed the bill in September, and the Obama administration and Senate Democratic leaders insisted on passing the identical legislation through the Senate, without any amendments, to ensure the bill would go to the White House for presidential signature before the end of the year.

Unlike the massively publicized deadlock over tax increases and budget cuts slated to take effect New Year’s Day (the “fiscal cliff”), the two parties had no difficulty working together to pass legislation to maintain the police-state powers of the American intelligence apparatus.

The rejection of all amendments was not merely a procedural matter. It demonstrated the bipartisan consensus that there should be no check whatsoever on the operations of the vast apparatus of spying and provocation that has been built up on the pretext of the “war on terror.”

One of the amendments would have required the NSA to obtain a warrant to monitor the Internet communications of an American citizen. Another would have shortened the reauthorization period from five years to three. A third would have made public the procedural opinions of the secret FISA court, established under the Foreign Intelligence Surveillance Act, which outline the scope of the communications monitored by the NSA.

The fourth amendment would have required the NSA to reveal the extent to which it is monitoring the communications of American citizens. The amendment’s author, Senator Ron Wyden of Oregon, compared the NSA to the British colonial rulers whose invasion of private homes led to the adoption of the Fourth Amendment prohibition on warrantless government searches. “It wasn’t okay for constables and customs officials to do it in colonial days, and it’s not okay for the National Security Agency to do it today,” he said.

He was answered by the Democratic chairwoman of the Senate Intelligence Committee, Dianne Feinstein of California, who condemned all opposition to the reauthorization bill as aiding and abetting terrorism. She warned of “another 9/11” and said those who would vote for any restrictions on NSA spying “believe that no one is going to attack us.” (Boy she sure changed her tune when she was leaving office, denouncing torture loudly in Nov 2014!"

The 2008 version of the FISA Amendments Act was rushed through Congress to retroactively legalize the spying conducted by the NSA, using the September 11, 2001 terrorist attacks as a pretext. While requiring the NSA to “target” foreigners, this was not a limitation in practice, since the law has been interpreted by both the NSA and the FISA court to authorize eavesdropping on any communication that may in any way be linked to a foreign target.

Thus, for example, an e-mail exchange between two political activists about a protest in support of WikiLeaks could be intercepted and stored, since WikiLeaks is a foreign-based group targeted by the US government, even though the two individuals are both Americans and have no direct connection to the organization.

As this example further demonstrates, the foreign target is not necessarily a terrorist or part of the Al Qaeda network, but can be any individual or group designated by the US government because of their political views or activities in opposition to US foreign policy.

In 2007, a liberal Senate Democrat from Illinois condemned the Bush administration’s policy of massive Internet and telecommunications surveillance and opposed any effort to authorize it through legislation. By June of 2008, however, Barack Obama had won the Democratic presidential nomination and was the presumptive heir to the role of commander-in-chief. He voted for the 2008 version of the FISA Amendments Act when it came before the Senate, and his administration has used these powers to the utmost.

The Washington Post estimated in a 2010 report that the NSA stores 1.7 billion communications—e-mail, telephone calls and other messages—every single day. An NSA whistleblower has charged that the agency’s database has accumulated more than 20 trillion interchanges between Americans.

The truth is that the greatest threat to the lives and liberties of the American people is the government of the United States and its military-intelligence apparatus, the largest machinery of state repression on the planet.

While the NSA uses technology to vacuum up the communications of virtually every American, other agencies of the federal government engage in more traditional surveillance and infiltration. As the New York Times reported this week, FBI counter-terrorism operatives had penetrated Occupy Wall Street groups even before they began to stage protests in the fall of 2011.

The military itself is increasingly involved in domestic operations directed against the American population, through new structures like the Northern Command, the first-ever headquarters for military action on the North American mainland, and the use of surveillance drones, thousands of which are being deployed within the borders of the United States.

The driving force of this repressive activity is not fear of terrorism, but fear of the intractable social contradictions within the United States and the emergence of mass popular opposition to the austerity measures being introduced to devastate social services and the living standards of working people. In the final analysis, the buildup of police-state powers testifies to a truth long upheld by socialists: the growth of social inequality within capitalism, the ever-widening gulf between the financial aristocracy at the top and the rest of the population, undermines any basis for democracy.

The defense of democratic rights requires the political mobilization of the working class to put an end to the profit system, expropriate the financial parasites and giant corporations, and put the wealth of society under public ownership and democratic control, thus extending democracy to the basic foundation of social life, the economic system.

Our POSTER is ANITA SANDS HERNANDEZ, Los Angeles Writer, researcher, mother of 4 and career Astrologer. Catch up with her websites  TRUTHS GOV WILL HIDE & NEVER TELL YOU, also The  FUTURE, WHAT'S COMIN' AT YA! & HOW TO SURVIVE the COMING GREAT DEPRESSION, and Secrets of Nature, HOLISTIC, AFFORDABLE HEALING. Also HOW TO LIVE on A NICKLE, The FRUGAL PAGE.* Anita is at astrology@earthlink.net ). Get a 15$ natal horoscope "my money/future life" reading now + copy horoscope as a Gif file graphic!

<====      BACK TO ARMCHAIR ACTIVISM AS ENTERTAINMENT AND FUN! Character building for Children.

<=== BACK TO  "HOW THE ENRON SYNDROME  BECAME AN EPIDEMIC" ALL CEOS do it NOW.

<===BACK TO THE CONSPIRACY OF THE GLOBAL ELITE

<===BACK TO "HOW TO LIVE IN A NAZI SURVEILLANCE STATE" WEBSITE