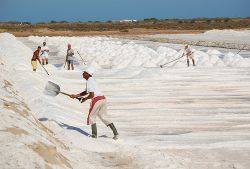 Sea Salt Business Thrives ! START YOUR OWN SALT BIZ! IMAGINE taking a bucket of water and making a bucket of money! Cheap and easy to find resource, free even and a final merchandise that garners high profits, that's the salt business. When India was in the grip of a colonial power and had to pay good rupees to buy ordinary ENGLISH SALT, Gandhi had a lightbulb. He got every peasant in the country (quite a few by the way) to learn to make their own salt. They walked to the ocean, thousands of people, buckets, boxes, photographers following & collected sea spume off the sand all the time thumbing their noses at the English through the newspaper men who were shooting pictures of them. Those pictures went round the world! and when they added English cotton stuffs to the tea party and spun their own cotton instead, England got the idea and let go of their colony! There are many websites out there offering real deal, high mineral sea salt, from Spain to France. Just google around.  I DID.

CELTIC SEA SALT is what I use. From a newspaper I get " Selina DeLangre believes her company's primary product, Celtic Sea Salt® Brand, not only adds flavor to foods but also provides essential health benefits. "Every human should only eat naturally-occurring sea salt with a balance of minerals. Because our salt is hand-harvested and contains mineral-rich sea brine, it's highly beneficial," said DeLangre, owner of Celtic Ocean International Inc.

To emphasize her assertion, DeLangre, 50, pointed to an office bookcase full of health books. "Every one of those books mentions Celtic Sea Salt," she said. "I have a network of more than 500 doctors, naturopaths, chiropractors and other health care professionals who recommend our salt."

The company does little advertising, instead relying on word of mouth. "Over 80 percent of our call-in customers are turning to natural health foods to work on combating health issues," said sales director Dianna Ramey. "We all try to stay informed about the natural health-food field." The company imports 580 tons of salt per year from salt ponds on the coast of the Brittany region of France. DeLangre says she keeps about a six-month supply stockpiled in her warehouse, and she takes two trips to Brittany each year.

The company was founded as The Grain & Salt Society® in 1976 in Chico, Calif., by Jacques DeLangre. Selina DeLangre married the founder's son, Philippe DeLangre, and started working for the company in 1979. After Jacques DeLangre died, the couple purchased the company, and in 1996 they moved both their family of five and the business to Asheville, because "there were doors opening here," Selina DeLangre said.

The couple divorced in 1999 and a battle for the company ensued. Ultimately, Selina DeLangre bought out her ex-husband with money borrowed from her father. She now serves as sole owner, CEO and president.

Initially, the business was located on Swannanoa River Road. Three weeks before undertaking a planned move to its current location in Arden, the business was swamped with five feet of water in the floods of 2000. Although equipment, inventory and new computers were destroyed, the business survived thorough "my determination to make it happen," DeLangre said.

DeLangre notes that while sales grew by four percent in 2008, the company's mail-order business decreased, forcing her to lay off some mail order staffers. The company now employs 32 people, up from seven in 1996.

"Our salt's now positioned as a necessity instead of a luxury. I'm grateful that in hard economic times, people can still afford our salt," DeLangre said.

DeLangre also has struggled to protect her brand, spending more than $300,000 over the past several years to fight brand infringement.

"Your brand is only as good as the money you have to protect it. I refuse to compromise on the quality of my brand, and I'll fight to protect that," she said. More than 1,800 retailers carry Celtic Sea Salt® Brand in the U.S., including Earth Fare, Green Life and, most recently, Ingles Markets. The company also has distributors in the U.K. and Canada.

"Salt really makes a difference in the taste. Ours is a raw food product, and it increases confidence in our product to have it contain Celtic Sea Salt®," Green said.

Of note: Celtic Ocean International recently was named one of three runners-up in Business North Carolina magazine's 2008 small business of the year competition.

Making your own salt  Fill a container with sea water. (try to chose a clean area to collect it from! Meaning no boats spewing oil or sewage, no harbor, no bait tanks.)

Line a sieve with a piece of muslin or a clean handkerchief to filter out any sand that is floating in the water.
If you're doing this in the summer, transfer some of the water to a wide shallow container - not metal, enamel would be best. For my tie dying fancies, I have always saved old refrigerator drawers which are enamelled steel. Fill to a depth of 1 or 2 cms. Leave it to stand where it will get plenty of sun  Hopefully the heat will evaporate the water and leave the salt behind that can then be scraped up   If it is taking too long then the application of a bit of heat from a cooker would help -  In the winter it is better you start with cooker straight away.  Pour some of the filtered water into a large, wide pan.  Bring the water to a steady, bubbling boil.   Keep an eye on the pan when you are down to the last few centimetres - a film of salt appears on the surface and the water becomes cloudier and cloudier.As clumps of salt form on the bottom of the pan stir with a wooden spoon  Turn the heat down and keep stirring until a soggy damp mass of salt is left Take off the heat  Scrape into a shallow bowl and let it dry in a warm place     Break the salt up when it is dry. You will get about a tablespoon of salt to every quart of sea water.
VIDEO:  http://conversationattheedge.com/2007/05/04/friday-video-making-your-own-salt/