CURRENT STATE OF THE AMERICAN PEOPLE in 2009

What? (I can just see you looking at me, and me looking at you in shock. Our problem Terrorism? DRUGS? HUH? In a country where a Senior's LIFETIME PENSION dried up as Banksters stole it? And a Social Security check of 340$ is too much MONEY for a senior to qualify for food stamps, yet it's a third of the rent that senior must pay? Where California Med-I-Care absolutely yanked optical and dental coverage for anybody over age 21? Where California refused to contribute to the crippled and infirm and pulled back on its AID TO THE TOTALLY DISABLED under SSI?  Adult TEETH will rot, adults will go blind, can't afford to buy garage sale books much less read them, where 12% are jobless, so no senior can make a living.) Where the entire country over the age of 21 cannot afford health care and will not get any free health coverage until they're 65? Unless the 21-to 65 set  knows how to go to an EMERGENCY ROOM and claim what is happening to you comes under that rubric. Which takes cojones. Try taking ulcers, cancer etc to EMERGENCY ROOMS!

In a country where the economy is falling apart, (we've got a 12% unemployment rate in CALIFORNIA but we know it's really double that as half of us do not report) and where more people laid off every day, in a country where 44 million people live on less than $12,000 dollars a year, in a nation where 5 million people are homeless, in a country where the entire media system is owned by only six media mega conglomerates, and the MEDIA CEOS are bought, entirely paid for by the TRANSNATIONAL CORPS, with loyalties and fiducciary ties ONLY to those big corporations, in a nation with the highest crime rate, in a country with the world's largest prison population, in a society where 60% of marriages end in divorce, in a country where 25% of kids under 12 live in poverty, in a country that cut 25 billion dollars out of veterans benefits to help pay for a new war,  in a country where the gulf between the rich and poor is growing everyday, in a nation that supports dictatorships in China, Turkey, Saudi Arabia, Egypt and Africa, in a country where the government is full of corruption, in a country with the world's highest teen suicide and stress rates... and you're telling me our biggest problems are TERRORISM and DRUGS? -- Why don't I think that EVEN YOU, you DUMB-AS-A-bag of hammers GEORGE BUSH jr  You don't really believe that, so why'dya say it? To cover the fact that the CIA is the institution dealing all those drugs to our kids and your Papa was head of it since cave man days! Your Bush CHeney State Dept. invented terrorism when you let those 19 guys ram the planes into WTC and Pentagon just to justify YOUR making an oil theft war on Iraq and Afghanistan.  (For your PLANNED PIPELINE)

LOOK AT THE CURRENT ECONOMIC STATS, this is the economy Washington gave us. Took a Brit statistician to look at this TUMOR growing on its face.
http://www.marketoracle.co.uk/Article7213.html 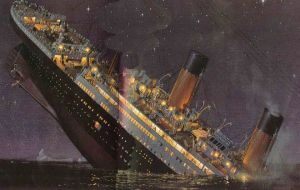 BUSH SEZ NOT TO WORRY, HONEY. Drugs and
Terrorism is the problem. Nothing more than that!
So just grab that deck chair and wait for it to
be over.

<-------- BACK TO THE COLLAPSE OF THE AMERICAN EMPIRE WEBPAGE, its CAUSES

<==== BACK TO THE UTOPIAN FIX THAT WE AS ACTIVISTS CAN ACHIEVE