THE PLEASURES OF LIVING WITH CHAYOTE VINES. 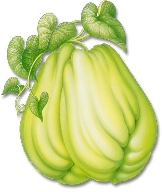 Grow CHAYOTES. They're easy to find in the marketplace. You plant two vines for the average property and you'll be growing more than you can use. They can be grown anywhere you get a squash-length growing season. Plant them in spring, harvest in autumn. If you can grow pumpkins or tomatoes, you can grow chayotes. Of course, they will freeze DEAD except in Florida and San Diego. In California, mine come back to life in January but who knows about your town.

They do well in Caribbean, Mexico. Anywhere there's a long summer and no freeze. Buy a few chayotes in the marketplace, all super markets have them these days. Mexican markets REALLY have them cheap, maybe a quarter each. Get the ones that have the new sprout about the size of a half almond, peeking out of the end. It looks like a pale avocado, pale green. Buy some extras to boil lightly, slice, eat the seed too, cover in butter/parmesan lemon or light tomato sauce.( Marinara.)

TO PLANT, set in ground so sprout is just above soil. Give it a permanent deep bed, as it is there for years. Now, to get branches for a trellis, use a tree. Or a garage or an arbor. The chayote can grow as big as a grapevine or wisteria. I set branches in the ground, that reach up into the air, then the tops I fix on the garage roof. Its rented, so I'm not afraid of water trapped in the foliage rotting the roof. It ain't MY roof!

BUILD A REALLY TALL, BIG TRELLIS. I do cross boughs, tying them on with strong cord, and getting on a ladder to do the top crossbars. It's a big tall trellis that arches over the walk. I can walk under it. It should get good sun. South side of bldg. is best of all. I've done it on western walls, and eastern. They all work though. I have them both face the sun, set one chayote on each side of a yard wide trellis. So there's a yard between the two fruits. They start growing like Jack's beanstalk, meeting in the middle a WATERFALL of green leaves, like the biggest damn cucumber plant you ever saw, and soon you have chayotes hanging there. CHAYOTES know no bounds. The send tendrils down t.v. cable wires, so chayotes hang like lanterns and weigh the wires down...They are insolent but so loveable you can't cut'em back so you just wait for your cable to go off and you know it'll be the wily chayote who did it.