YOUR PARENTS CAN HAPPILY DIE. Or better said, "DIE HAPPY" 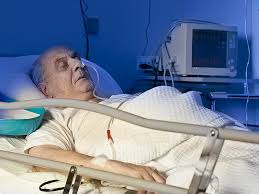 It's alright son. The death tax is
gone at least. Tis a far far better
thing I do.....(aacccckkkk!)

Dad'll DIE HAPPY cuz the Estate tax/ inheritance tax, death tax will be GONE. OVER WITH!  True, it was a tax law made for the rich men's benefit. but the occasional poor guy with both LONGEVITY & a private home that shot from 15k to $1,000,000 VALUE will SURE have some lucky kids !

THE TRUMP PLAN as SEEN BY CNN MAY 4th, day it passed: http://money.cnn.com/2017/05/04/news/economy/obamacare-republican-health-care/

Basically, YOU CAN still GET FLU SHOTS and treat a case of your back going out from your two full time jobs..........As TRUMP MEDICS will take care of any NEW problem. It's the diabetes and high blood pressure and cancer they won't treat. They are called pre-existing conditions and THESE they won't touch! Those goodies
were in the pinata OBAMA gave you. Party's OVER, KIDDIES!

Your kids get no more of that plush med care til 26 yrs of age, (that hinky provision was dumb Obama care) no rehab or shrink tech at all during those perilous TEEN YEARS with all the DRUGS the GOP/CIA imported to make money to FUND covert ops...... no mental health care if the HEROIN cuts off blood to the brain. Nuttin' ! So MOM? DAD? They better walk a sober line. This is good actually, in Darwinian TERMS of course. Deploreables O.D. and are gone from the GENE POOL. Salvageables are abstinant, get Straight A's , graduate with honors, get great jobs paying six figures. WIN WIN!

ALL SENIORS' CONDITIONS that WERE PRE-EXISTING will not get medical attention. Cancer, diabetes, High Blood Pressure, Lung problems from CORPORATE OIL AND COAL profits hanging thickly in the air and poison in the water... ZIP. But there's NO ILL WIND that doesn't blow SOME GOOD cuz  when they die and they definitely WILL --- the property they leave won't be taxed! WINNERS REWARDED? No. The sick guy has to lose and die both. Hmmmmmmm.

All the same, don't fret. Again in Darwin Speak, this says, for 3 yrs and 9 months, EAT A HOLISTIC ALTERNATIVE DIET  http://www.luckinlove.com/perfeat.html       and WORK OUT to build muscles and do YOGA as limber bodies work out better. No salt, no carbs, sugar, no saturated fats. Enjoy that diet of BROCCOLI!

Q: DO I UNDERSTAND THIS RIGHT? I gotta make sure that all my rich relatives DIE during the TRUMP PRESIDENCY??
A: Well, let's not put it THAT way. THE HEALTH CARE TRUMP IS GIVING THEM WILL DO THAT!  If they care to mortgage property to visit doctors privately the way we did in the last two centuries ...pay with cash, it would be a good idea to have seminars to teach SENIORS the old time skill of bargaining with the doctor for cash on the barrel head special, lower rates. Trump's trying to tell us that Americans have forgotten " THE ART OF THE DEAL"  Be good for everybody in the end.

https://www.nytimes.com/2017/02/17/opinion/is-it-time-to-call-trump-mentally-ill.html
Feb 17, 2017 - A lot of people seem to be questioning President Trump's mental health. This month, Representative Ted Lieu, a California Democrat, went so ...
Dozens of psychiatry experts claim Trump has 'dangerous mental --
https://www.aol.com/article/news/2017/04/25/dozens-of-psychiatry-experts-claim-trump-has-dangerous-mental-i/22049682/
Apr 25, 2017 - According to The Independent, over thirty mental health experts, all of whom have never personally examined President Trump, say they have ...
Trump's mental health debate: What is it about? - BBC News
www.bbc.com/news/world-us-canada-38991171
Feb 16, 2017 - Is it right to discuss Donald Trump's mental health? ... But experts are debating the mental health of the US president. ... The concerns, he said, stemmed from questions about the president's truthfulness and the suspicion that ...
Democrats raise questions about Trump's mental health | TheHill.
Feb 17, 2017 - Democrats raise questions about Trump's mental health ....
http://thehill.com/homenews/house/320018-democrats-raise-questions-about-trumps-mental-health
Donald Trump has 'dangerous mental illness', say psychiatry experts ...
Apr 21, 2017 - Mental health experts claimed the President was “paranoid and delusional”, and ... US politicians 'openly questioning Trump's mental health'.
Donald Trump displays classic traits of mental illness, claim ...
http://www.independent.co.uk/life-style/health-and-families/donald-trump-mental-illness-narcisissm-us-president-psychologists-inauguration-crowd-size-paranoia-a7552661.html
Jan 30, 2017 - More and more mental health experts are sharing their diagnoses to ... but some psychologists have now started questioning his state of mind.
Trump has 'dangerous mental illness': Experts
http://www.presstv.ir/Detail/2017/04/22/518976/US-Trump-mental-illness-psychiatrists
Apr 22, 2017 - Over thirty mental health experts said Thursday at a conference at Yale University that Trump was “paranoid and delusional” and that they were ...
Mental health experts say Trump is unfit to serve | MSNBC
http://www.msnbc.com/the-last-word/watch/trump-s-mental-health-the-elephant-in-the-room-883814979800
Feb 21, 2017 - Some psychologists and psychiatrists are speaking out about Trump because of a duty to warn. Lawrence talks to two experts with this view: Dr.
Donald Trump's mental health questioned by psychiatrists in letter to ...
http://www.news.com.au/lifestyle/health/mind/psychologists-psychiatrists-express-concern-over-donald-trumps-mental-health/news-story/514864631040895478867a1cc9c8528f
Feb 16, 2017 - “Silence from the country's mental health organisations has been due to a ... The “experts” described the President as having “an inability to tolerate views different ... Leading psychiatrists have questioned Donald Trump's ...
Psychiatry experts claim that Trump is unfit.
http://www.theblaze.com/news/2017/04/24/psychiatry-experts-claim-that-trump-is-unfit-for-presidency-due-to-dangerous-mental-illness/

<=== BACK TO THE DREAM FARM WE CAN ALL HAVE, IN THE BURBS or l gas tank from city