2008 Limited bail out of BEAR STEARNS/ JP MORGAN not so limited!
(Invoking a rarely used 1932 Amendment to the Federal Reserve Act, The Federal Reserve set up a special fund with $200 billion that can be used by major banks to shore up their capital position so that a) they won't fail altogether and b) they can continue to loan multiplied billions to well-heeled clients world-wide.) 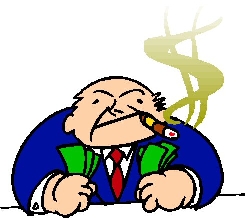 I'm a BANKER NOT A BANKSTER! GET IT?

As the global financial crisis unfolds, one thing is certain: The major
investment and commercial banks who have wrecked our economy and
financial system are now successfully sucking unlimited amounts of money
from the people's Treasury to bail themselves out.

Drooling at the head of the line were Bear Stearns and JP Morgan Chase.
There will be more.

In simple terms, Bear Stearns, the fifth largest U.S. investment bank,
got caught in a massive bank run. Virtually overnight, those who
extended credit on a regular basis, disappeared. It's not that they
didn't deserve insolvency, because Bear Stearns was a pioneer in the
securitization of now-toxic subprime mortgages.

Had Bear Stearns been allowed to collapse, it would have set off a
domino effect that could have taken down major commercial banks as well
as other investment banks and brokerages.

Fed Chairman Bernanke and Treasury Secretary Paulson quickly set into
motion a plan to prevent disaster. (Um, hold on to your wallet!)

Invoking a rarely used 1932 Amendment to the Federal Reserve Act, The
Federal Reserve set up a special fund with $200 billion that can be used
by major banks to shore up their capital position so that a) they won't
fail altogether and b) they can continue to loan multiplied billions to
clients world-wide. The language of the Amendment gives the Fed such
authority when “unusual and exigent circumstances exist and the borrower
is unable to secure adequate credit accommodations from other sources.”

In essence, the Fed becomes the lender of last resort, and the
Treasury guarantees payoff even in the case of default.

But, Bear Stearns is NOT a bank and NOT a member of the
privately-owned Federal Reserve. And since the Fed can only deal directly
with member banks, it channeled funds through surrogate JPMorgan Chase, to
purchase Bear Stearns and guarantee its continued operation.

What a sweetheart deal for JPMorgan Chase: It literally stole the
company for a mere $2 per share or a total of about $250 million. The
Bear Stern headquarters building alone is worth at least a billion
dollars. Its stock traded as high as $170 just over a year ago.

So, Bear Stearns gets bailed out at no risk to JPMorgan Chase, and JP
Morgan Chase gets to add windfall assets to its own balance sheet.

Don't be shocked to remember that the Chase in JPMorgan Chase is derived
from the old Chase Manhattan Bank that was the dynasty of David
Rockefeller, which merged into banking giant JP Morgan some years ago.
Rockefeller was the co-founder of the elite Trilateral Commission in
1973, whose specific goal was to create a "New International Economic
Order."

Americans aren't going to take this much longer.

Social mood is visibly turning just as certainly as a San Francisco
cable car on its turntable at the end of the line.

A recent search on www.cnnfn.com for "Bear Stearns" produced these two
sponsored ad links at the very top of the results page:

a.. "Bear Stearns Lawsuit: Lost Money in Bear Stearns Shares? Free Case
Review" b.. "Bear Stearns Employee? Did Company Violate Your Rights? Get
into an ERISA Investigation" This is just the tip of the iceberg.

The FBI announced in January that it is currently probing 14 major
mortgage lenders for fraud, including Countrywide Financial. It is very
likely that Bear Stearns is among this list. Several Federal and state
agencies are already investigating criminal wrongdoing from the Bear's
two failed hedge funds that went under in 2007.

Can an industry as corrupt and self-serving as this escape unscathed
under the gaze of a hoard of hungry lawyers, attorneys general, state
and federal agencies and more? Not.

This writer predicts that at least some of these top executives will
ultimately be carted off in handcuffs, much like Jeffery Skilling and
Kenneth Lay after the collapse of Enron in 2001.

Meanwhile, ABC News reports that Bear Stearns has called in grief
counselors "to help workers handle the news that their plans and perhaps
their dreams have abruptly and dramatically changed." How thoughtful.

Apparently, the overnight loss of 99% of their retirement funds plus the
prospect of losing their jobs is producing symptoms like depression,
withdrawal, sleeplessness, loss of appetite and anxiety and
irritability.Marriage breakup and traumatized children.

Understandable, but many of us have been suffering the same things over
the sellout and meltdown of our entire country, and for a lot longer
than they have! Who will hire grief counselors for us?

Patrick M. Wood is editor of The August Review, which builds on his
original research with the late Dr. Antony C. Sutton, who was formerly a
Senior Fellow at the Hoover Institution for War, Peace and Revolution at
Stanford University. Their 1977-1982 newsletter, Trilateral Observer, was
the original authoritative critique on the New International Economic Order
spearheaded by members of the Trilateral Commission. Try to get old
copies at abebooks.com probably only cost a few quarters each.

Our POSTER is ANITA SANDS HERNANDEZ, Los Angeles Writer, Mother of 4 and career Astrologer. Catch up with her websites TRUTHS GOV WILL HIDE & NEVER TELL YOU, also The  FUTURE, WHAT'S COMIN' AT YA! FRUGAL LIFE STYLE TIPS,  HOW TO SURVIVE the COMING GREAT DEPRESSION, and Secrets of Nature, HOLISTIC, AFFORDABLE HEALING. Also ARTISANRY FOR EXPORT, EARN EUROS... Anita is a FUTURE READER in more ways than ONE She can do your NATAL HOROSCOPE, DESTINY & FUTURE READING. Write her at astrology@earthlink.net ). Get a 35$ natal horoscope "my money/future life/ mate/ sweetheart/ child destiny" reading now + copy horoscope as a Gif file graphic! No smarter, more accurate astrologer out there!

<=== BACK TO ENRON PLANET, the DOOMSDAY SCENARIO all connected, crafty criminal CEOS do these days!

<=== BACK TO THE GLEENERS PAGE

<=== START YOUR OWN CHARITY, CHANGE THE WORLD ARCHIVE

<====BACK TO THE FREE MONEY INDEX PAGE

<=== BACK TO THE DUMPSTER DIVING 101 TRAINING COURSE

<=== BACK TO THE PROPAGANDA TRIX GOV USES ON YOU, an ARCHIVE

<===BACK TO THE PSYCHOLOGICAL UPGRADE, A NEW WAY TO EARN A LIVING

<=== BACK TO STUDIES ON THE PSYCHOLOGY OF EMPIRE, GLOBAL ELITE


signed ANITA SANDS HERNANDEZ from astrology @earthlink.net who says "KNOCK ON THE PORTAL to 7,000 ARTICLES/ SEMINARS of BLOG STUFFERS which you can REPUBLISH FREE, AD PERPETUEM, AND ATTRACT AD REVENUE. DOOCE.COM had ad rev totalling 40k a month!

<== BACK TO THE TRUTH ABOUT THE PLANET MELTDOWN WEBPAGE/ ARCHIVE

<=== BACK TO THE FIX REQUIRED TO SAVE AMERICA, WEBSITE