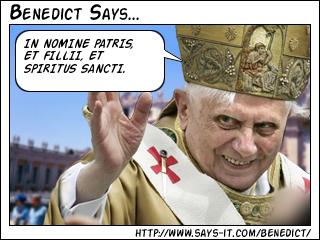 NEWS ALERT! The PANZER POPE TOURS WALL STREET, the site of the REAL World trade center CRASH!!  Is his visit to pronounce LAST RITES? The Papacy of the BUCK, WALL STREET, a world where every CEO is a kind of a "POPE CEO" running wild. The CRIB OF CAPITALISM. X marks the spot that sunk WALL STREET! Despite spreading recession, US CEOs hog down massive pay raises. No corporation shows profit on its stock. Ya ever WONDER WHY? Read this and you'll know why the real disaster on Wall Street ain't the WTC!

Today POPE BENEDICT is visiting America! He'll tour the wreckage of 911 down in the Wall Street area but the real wreckage is not the skeletons of the WTC and 3,000 bodies, it is WALL STREET itself. Pope Benny will be seeing the very crib, the straw and the manger where the anti-Christ of the American Recession was born! You know the one, --the death crunch sparked by corps sans profits, (that's ritual Latin for SUCKERS' MARKETPLACE....the Mortgage Banks sans morals, --resulting in the ongoing collapse of the mortgage bubble, resulting in a damaged dollar which causes oil prices to surge, ditto food/utilities & rents to double. The Crunch that  calls for massive wage and benefits concessions from unions & workers who are starving anyway --while high above the Pope's head, the towering skyscrapers are full of Banksters and CEO's earning 100 million a year (as US corporate management is continuing to award itself immense salaries and golden parachutes). And that is the theme of this article that I found:

"On April 6 the New York Times reported on a survey by research firm Equilar of chief executive officer (CEO) pay at 200 companies with yearly revenues over $6.5 billion. Equilar found that average pay for CEOs with two  years experience or more in 2007 was $11.2 million, up 5 percent from 2006. Including newly hired CEOs, average pay was $11.7 million. So these are the NEW POPES of the PLANET. By comparison, US median household income in 2006 was $48,000.  These are the dumb Christians who leave their money in the donation plate.

CEOs in larger firms typically rake in far larger salaries, even when they have presided over financial catastrophes for their firms. Equilars report found that the CEOs of the 10 largest financial firms in the survey were collectively paid $320 million, while their firms reported mortgage-related losses of $55 billion and the market price of their stock fell by over $200 billion.

On March 19 Business Week reported on the compensation of top executives at Bear Stearns, the major Wall Street investment bank that failed in March due to a collapse in the value of its mortgage-backed securities. The Federal Reserve intervened to take Bear Stearns obligations onto its books, organizing a bailout with JPMorgan Chase. Tens of thousands of workers have lost their jobs and, with the collapse in the value of Bear Stearns stock, their retirement.

Business Week writes: Then came the fattest year of all, 2006. Bears mortgage origination and other credit products grew at a 27 percent clip, and the companys expansion into these areas really paid off, at least for those at the top of the pay pyramid.... Cash bonuses jumped to more than $16 million for Cayne, Schwartz, and Spector. Less than 18 months later, the credit products underlying these bonuses were worthless.

Payoffs to CEOs when they accept or resign a position are often even larger. Citigroup, which wrote off over $20 billion in losses in 2007 and whose shares fell 47 percent, paid $216 million to hire its new CEO, Vikram Pandit. This included $165.2 million in connection with Citigroups $800 million acquisition of Pandits former firm (alternative investment specialists Old Lane Partners), $2.7 million salary for Pandits six months as head of Citigroups alternative investments division, and $48 million in stock options.

In recent months, the pay packages of a number of financial executives have gained public attention, especially in the light of the collapse of mortgage-backed alternative or exotic investments. Despite Citigroups disastrous performance, its former CEO Charles Prince retired in November 2007 with a $68 million retirement package. In October 2007, after investment bank Merrill Lynch had written down over $12 billion in bad mortgage debt, its
CEO Stanley ONeal left with a severance package of $161 million, on top of his $48 million salary.

Exorbitant CEO pay demands are prevalent throughout the entire economy, going far beyond financial firms. In January 2007 retailer Home Depot ousted its CEO, Bob Nardelli, for poor stock performance and an abrasive personality. Nardelli, who went on to become CEO of automaker Chrysler, took a $210 million severance package. When pharmaceutical firm Pfizer fired its CEO, Hank McKinnell, in July 2007amid layoffs of thousands of workers and $4 billion in lossesMcKinnell took a severance package of over $180 million.

Such stories demolish commonly repeated claims that CEOs exorbitant pay is justified by the value they add to their companies, or by the enormous cost of hiring an executive capable of expert stewardship of a major corporation.

Instead, top executives are each looting tens or hundreds of millions of dollars from their companies, as their irresponsible managementperhaps best symbolized by the failed gambling on large-scale issuing of subprime mortgages, which are by definition very risky investmentsdecimates their companies bottom line
and stock value.

To the extent that companies cannot find replacements for such executives who do not demand similar compensation and behave in similar ways, this simply points to a broader social problem: all major decisions at large corporations are taken by representatives of an elite class whose immense wealth effectively shelters
them from the consequences of their actions.

The cynicism and complacency of this layer were highlighted in an April 6 column in the New York Times by Ben Stein, titled In the Boardroom, Every Back Gets Scratched. In the essay, Stein noted that CEOs salaries are approved by corporate boards, which are periodically nominated by CEOs and approved by
shareholders. This effectively gives CEOs huge power over board members who will set their salaries.

Stein gives a remarkable description of the life of the members of a corporate boardoften members of top management at other corporations. He writes: To be a member of the board of a large company is a little example of paradise. You get good pay for just sitting in a meeting and listening to summary presentations.
You get insurance and a pension. You can go to luxurious resorts and play golf. What the heck are [airport] security lines? You fly in private jets. Sometimes you get stock options, and these can be meaningful. In other words, its nice to be the director of a public company. How do you keep your job? You are really nice to the person who put you in that job.

Even having observed, however, that the nation has become, to some at the top, far more of a looting opportunity than a family, Stein cannot bring himself to condemn the situation. Instead, he blandly concludes: Your basic human is not such a hot itemand the structure of the joint stock company does not bring out the
best in us.

Though Stein is unquestionably correct regarding the behavior of the CEOs of todays joint stock companies, as to his toxic pessimism about humanity one can only reply: speak for yourself. To masses of people who work for or depend on the decisions of major corporations, the looting carried out by top executives is not the inevitable reflection of human nature, but a direct threat to their jobs and living standards. For them, the behavior of
CEOs and boards at joint stock companies will reveal above all the destructiveness of placing private profit above the needs of society.

<------ BACK TO "GUERILLA CAPITALISM as average guy's SOLUTION" WEBPAGE