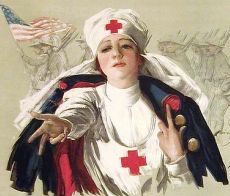 How did the RED CROSS START? Clara Barton got an idea, (to take medical supplies to the battlefields of the Civil War  and help the wounded soldiers.) She did it on her own, raising money herself as the Government wouldn't help her. After the war, fatigued & resting up in Europe, she saw the EUROPEAN RED CROSS and thought, why doesn't America have our own RED CROSS? There certainly were enough people to implement it, -- all those beautiful, single girls around town with nothing to do. What if they got minimal training and could help out on battlefields and at hospitals? (They had slums and plagues all the time back then if not wars.)

Women didn't work in those days but by then Clara was well known, she stood up and said 'look what I'm doing. I'm well born and female but I'm nursing! She knew exactly what would happen. Really beautiful, rich educated girls became quite interested in the CLARA BARTON persona first, then --  the actual nurse avocation.  To 19th century women, nursing seemed kind of  like a field trip for girls who never had a field trip (locked in those posh boarding schools). They were deprived. They wanted to leap into the nursing game and follow Clara wherever it went. Lemmings that humans are, she was able to create a huge charity in America.

You can learn from ole Clara. START AN INTERNATIONAL CHARITY To do that, you need only have a peculiar passtime and persona and an idea. Anything can trigger an idea. You see those NATURE POOR BEAR TV shows? And you love grizzly bears, well they're in trouble, or POLAR bears, they're in worse trouble. You like Wild Horses? Well they shoot horses, don't they?  ANYTHING can engender an idea for a charity fix. NEWS TV SHOWS work the best for me. DOCUMENTARY TV (History channel, Science channel,) work  second best. BOOKS are third best and the most laborious as you actually have to go to a library or used book store, read a few tomes, the first two you just sit there.  And of course, first, you must have an idea of the book you want to look for, so that's why I prefer getting accidentally inseminated with an idea by turning off PRIME TIME TV and watching science shows.

SECOND, you must write your idea down in your own words: aims, objectives, dreams, hopes. This is kind of like imagining the child you will one day have and getting to do a Mr. Potato head, and put on eyes, features, noses, and invent the gene sequences for 'your baby.' "We will feed the baby polar bears left over PET KIBBLE." or whatever. We will have polar bear farms and teach them to live in warmer weather. Or maybe your idea for a charity is to bust factories on  pollution that contributes to global warming. CLIMATE COPS. Nature Vigilantes. There's an idea whose time has come. Think LOIS GIBBS and LOVE CANAL!

NEXT, you have to have an editor pal who's really sharp at English to "charge up' your prose. Find some really hot 'new words.' Turn up the fire under the old words. Want to use vacant lots for growing community gardens? Talk "SENIOR STARVATION."

ALL THE IDEAS for charities are NOT USED UP YET. There's MENTORING--  There's GERIATRIC ASSIST, There's Scholarships for Daycare, for Latch Key kids, a month at a time, so Working moms can get toddlers into care. You can fund these ideas giving fun parties, meet all the great people in town who perhaps are singles, yuppies, want to hit the parties, l0$ at the door and you are legally fund raising. Get a registery and send out volunteers to mentor or thread needles for seniors, do shopping. Each volunteer gives an hour a week, no more. Nothing tiresome. And you run it and salary yourself. It isn't a lot of hours to do this job, maybe an hour three times a week, then the several hours at the party which of course are great fun. You let gal pals come free to take the money at the door, give out name tags and take email addies.

I can do a website for you in one hour flat if you give me your text in an email. And a graphic would be nice. Or I can find one for you.

Then you have to post the concept on a website. Send its URL  out to your lists, your net chums, your club members. This will launch a kind of blazing FIREWORKS IDEA and connect the idea to a TEAM.  LIke hitching a thousand good horses to a big wagon.

THE CENTRAL CORE of your WAGON, remember, must always be a  PROBLEM that you with your unique persona solved ... some city/ state/ country wide or even international PROBLEM that you ponder from every view, statistics, costs, doing a facet-by-facet examination until the problem clearly has been turned into an Issue! It is OK to overstate your own relationship to the solution, stressing your persona is paramount as hey, -- you are unique and dramatic and it's gonna take that. Think back to CLARA.

You will then wrap that persona and that ISSUE in a humanitarian SOLUTION of your own, unique design which also must feature this BRIGHT, NEW IDEA of HOW TO FUND the fix. Is it gov grants, fund raising parties? Is it Little March of Dimes cards given out in school? That was a good one. Kids made a lot of dimes off that trend as you'd know if you remember the fifties. You want to describe exactly HOW your group will accomplish the aims, solutions, fund the fixes.

Your baby has legs at this point but this is the exact moment when you must wrap this highly publicized idea in a TEAM made up of living, breathing ALTRUISTS, VISIONARIES, also your close relatives & chums, not visionaries but at least you have their cell phone number.

When the people are packed in, at this point you must quickly insert a fuse and light it. That fuse is PUBLICITY and if you light a fuse that is NOISY enough and launch this sputtering sucker like a rocket heading straight up, it will climb higher and higher then light up the sky! Heads everywhere will turn and you'll see YOUR NAME WRITTEN IN LIGHTS UPON THE HEAVENS!

At that point, you personally have to do a ton of publicity and if you do, and sacrifice your need for privacy for doing dozens of TALKING HEADS shows ON radio & TV.  But it's for a good cause. MANY other PEOPLE have nothing better to do than watch tv and listen to radio and they will see it's a gangbang and join in as volunteers, some of them are angels but of course, by then, some of them will be the wrong people who enter for the wrong reasons --- celeb worshippers, sin-expiating squirrels who want to clean their fur, figure your group can act as a tooth brush. But it doesn't matter because by then, the ORIGINAL volunteer TEAM is hard at work and many doors have opened for them. Each door that opens gets them NEW COUNTRIES, cities, volunteers and  you get SPORES seeding off the main arena dozens, even hundreds of spore groups.

This in turn gets you even MORE PUBLICITY and then you actually do make change. Step away at that point, --step back fast as all FIREWORK IDEAS become INSTITUTIONS. Big clubs that depend on crowd control instantly get overripe and corrupted. somebody way at the top knows he's the leader and it goes to his head. He commits crimes. Invariably they are actual, legal misdemeanors ranging from sexual harassment, theft, embezzlement,  misappropriation of ideas and up to and including character assasination, libel and the ultimate sin, firing cohorts.

At that point, the entire altruistic project begins to rot from the top down (the most vain get the most putrified the fastest,) and that stink causes renewed interest/ competition among bureau heads which gives a mini-second life but invariably the stink leads to gossip and bad publicity which seeps down into the groundswell movement affecting numbers and at that point, the cart shakes itself to death and the  whole thing runs off the road into a ditch and becomes ineffective pretty quickly.

So you want to start and launch your own, fresh new projects with fresh, new people, never walk in somebody' else's moccasin tracks or join in somebody else's party when it's up and running in that celebratory, high publicity first rocket stage as those are the ones that have already spent half their lifespans and will capsize fastest.

Got a pen? Make a list. CHARITIES I WOULD PERSONALLY like to see DONE. DAYCARE SUBSCRIPTIONS at EXTANT DAYCARES   for latch key kids, involving  scholarships, so working mothers can wait on a list until a nearby daycare has an opening...ummmm, lessee,  Senior Food carrying service. Seniors don't have cars, can't get to cheese giveaways...so we need drivers to carry soup cans and salad dressing bottles and a head of romaine and some canned tuna to a subscription list of poor homebound seniors, not MEALS ON WHEELS exactly but more like CAN ON VANS... . 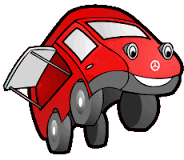 AND imagine FOOD GROWING on every patch of land anywhere. HOW many vacant lots been sitting there for decades? We want COMMUNITY GARDENS all over the city and if CITY HALL won't let you, cut into their front lawn! Just get 50 shovels, a club of fifty and start digging.

Our POSTER is ANITA SANDS HERNANDEZ, Los Angeles Progressive Researcher / Writer, Mother of 4 and career Astrologer. Catch up with her websites  TRUTHS GOV WILL HIDE & NEVER TELL YOU, also The  FUTURE, WHAT'S COMIN' AT YA! & HOW TO SURVIVE the COMING GREAT DEPRESSION, and Secrets of Nature, HOLISTIC, AFFORDABLE HEALING. Also HOW TO LIVE on A NICKLE, The FRUGAL PAGE. and 50 other themes that appeal like GETTING ON THE DOLE, HOW TO NEVER NEED A VET FOR YOUR PET .. HER MAIN PAGE WITH CLICKABLE PORTALS is THE ASTRAL WEBSITE! Anita is at astrology@earthlink.net ). Get a 15$ natal horoscope "my money/future life" reading now + copy horoscope as a Gif file graphic!

<===== BACK TO THE LUCK IN LOVE WEBSITE, GREAT  IDEAS FOR GIRLS TO SOCIALIZE ON HIGH

<==== BACK TO THE PORTAL TO 7,000 ARTICLES, REPUBLISH ALL OR ANY FREE, ATTRACT AD REVENUE TO YOUR SITE

Anita Sands Hernandez is an astrologer, palmist, tarot reader, and ASTRO DICE interpreter and does all four for quick phone call readings. Give her a call at 818 774-1939 in Los Angeles or come on by, 30$ the hour. 15$the half hour. or email her, send copy of your chart. Takes one minute to make it for her  go to this "HOW TO DO YOUR HOROSCOPE AT ASTROLABE, or ASTRO.COM -- A LESSON