I thought I'd give you a short list of all the unresolved oddities of 9/11.
I draw no conclusions. These are all sourced from mainstream,
traditional news sources. Nothing hippie dippie. 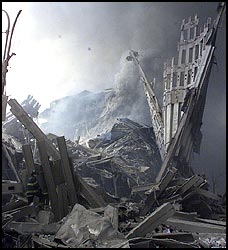 ·         Dozens of irregularities concerned NORAD's response once it was known the 4 planes were hijacked.

·         Also the weird coincidence of "Vigilant Guardian", an exercise NORAD was conducting at the time which dealt with hijacked airplanes.

·         Mohammed Atta's checked luggage, i.e. the stuff in the belly of the plane that he could not get access to, had lots of incriminating evidence. It was found when his luggage was delayed when Atta transferred from an earlier flight, and he was the only passenger whose luggage WAS delayed.

·         There was a weird possible attack against President Bush at his hotel before he got to Booker Elementary on 9/11, similar to what happened 2 days earlier to Shah  Massoud.

·         The south WTC tower collapses perfectly straight in the space of ten seconds.

·         Employees of ODIGO say they were warned two hours before 9/11 hit the WTC yet either a denial that this occurred or who sent the messages has never been publicized.

·         Bush is informed that there have been two attacks and yet sits motionless in classroom for 7 minutes. Plus the Secret Service does not remove him to a secure location despite unknown nature of threats. He holds the children’s book upside down.

·         Seen on tape, Bush is informed by (departing) chief of staff Andrew Card that "America is under attack" yet walks away without waiting for any response.

·         In various statements to the press, Bush gives at least different and contradictory versions about how he learned about the 9/11 attacks.

·         Rumsfeld is in Pentagon and predicts there will be a terrorist event two minutes before first plane hits WTC.

·         Man who actually owns the WTC was not in the building due to a dermatological appointment.

·         By the end of the day, the administration is publicly blaming Osama and Al-Qaeda.

·         The White House has a plan to invade Afghanistan signed and ready on September 10.

·         Some witnesses reported seeing a missile fired at the WTC north tower from the Woolworth building before the plane crash.

·         In all the reported calls from passengers on hijacked planes, none of them ever mention the nationality or ethnicity of the hijackers.

·         Mayor of town in Shanksville, where Flight 93 crashed, says he saw no evidence of plane wreckage in the area. Other witnesses report just a large gouge/hole in the ground, including the county coroner.

·         Flight 77's crash into the Pentagon happened to hit the least populate d area of the building because it was being renovated, although a large amount of fiscal data was stored there. The day before Rumsfeld publicly announced 2 trillion dollars of the Pentagon's spending cannot be accounted for.

·         The first CNN correspondent on the scene at the Pentagon sees no evidence of a plane crashing into the building.

·         Flight 77 was officially listed as being piloted by hijacker Hani Hanjour, who although licensed was a very poor pilot and the government originally listed someone else (Mosear Caned) as the 5th hijacker on that flight.

·         The FBI seized security videotape of Flight 77's impact but has refuse d to release them to the public.

·         A large number of shares of American and United Airlines is bought cal led "put options" wherein the holder profits if the stocks go down. Who bought these put options has never been publically identified.

·         The nearly perfectly intact passport of one of the established hijackers is near the rubble at Ground Zero on September 17, 2001.

·         After the attacks, members of the bin Laden family were allowed to fly out of the U.S. when the rest of the country was banned from flying.

·         The published passenger and crew lists of all 4 hijacked planes has absolutely no Arabic names nor the names of the established 19 hijackers.

·         Within a week of 9/11, Osama bin Laden releases two separate press statements denying any involvement with the 9/11 attacks. A week later he denies it again in an newspaper interview. He also denies it once again a few weeks later.

·         A videotape found in Afghanistan of poor quality allegedly shows a fat Osama bragging about 9/11 and this is used by the administration as proof of his guilt.

·         On September 20, FBI director Mueller admits as many as 7 of the listed hijackers are incorrectly identified -- as the men listed are alive elsewhere around the planet, after many of them give television interviews.

THESE WERE THEIR UNCOVERED MAPS/ CLUES FOR US;  it is nothing less than the PROOF of secret Plans for World Domination

This article provides the missing link for the truth about 9/11. The missing link is MOTIVE. A FALSE FLAG OP.  If you cannot imagine why anyone in government would want to IMPUGN innocent countries so WAR could be pursued or COVER UP essential evidence, then wonder no more. Taken from the forensic clues, deeds, actions and even words of the plotters themselves, you will come to understand that a terrorist attack was exactly what they hoped for to justify a massive military incursion into the Middle East, all of which was planned long before 9/11. You will spot immediately those decades of maneuvering for the control of oil and gas resources and see, first hand, incredible war profits on a scale much greater than ever before in history. Even if you are familiar with some of these events, this is the first time all of them have been brought together in one place.

Our POSTER is ANITA SANDS HERNANDEZ, Los Angeles Writer, Futurist, researcher, mother of 4 and career Astrologer. Catch up with her websites  TRUTHS GOV WILL HIDE & NEVER TELL YOU, also The  FUTURE, WHAT'S COMIN' AT YA! FRUGAL LIFE STYLE TIPS,  HOW TO SURVIVE the COMING GREAT DEPRESSION, and Secrets of Nature, HOLISTIC, AFFORDABLE HEALING. Also ARTISANRY FOR EXPORT, EARN EUROS... Anita is a FUTURE READER in more ways than ONE She can do your NATAL HOROSCOPE. Write her at astrology@earthlink.net ). Get a 15$ natal horoscope "my money/future life/ mate/ sweetheart/ child destiny" reading now + copy horoscope as a Gif file graphic! No smarter, more accurate astrologer out there!

<=== BACK TO THE PROPAGANDA TRICKS GOV USES ON YOU, ARCHIVE

<=== BACK TO THE PSYCHOLOGICAL UPGRADES, A NEW WAY TO EARN A LIVING, no LIC, Degree req'd.

<===BACK TO STUDIES ON THE PSYCHOLOGY OF EMPIRE, GLOBAL ELITE