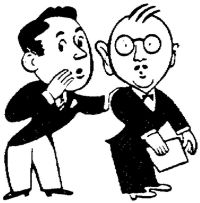 THIS IS "WHISPER NEWS", hot off the BACK STREET CHANNELS and We are going to tell you the  HOT!! NEWS that NOBODY ELSE WILL PUBLISH,
the scandal and skivvy on THE people and events BEHIND the NEWS and BENEATH THE NEWS

NOT INTERNET CRAP about the Illuminati and shape shifting royal Reptiles
but stuff that's REAL. Stuff that  HAPPENED which NOBODY CAN TALK ABOUT:
FORBIDDEN NEWS, FORBIDDEN VIEWS! SHHHHHHHHHHHHhhhhhhhh.
'THEY' are listening. Oh yes, 'They' know the truth is the ULTIMATE ENEMY OF THE STATE!

We live in a POLICED SOCIETY so you gotta be up on the SPY TECH to FOIL them.
We need a back channel to inform one another as things get tougher. Consider that Orwell's
1984 is here and THOUGHT POLICE exist tracking private conversation, tracking the big
noisy websites that are famous for spilling government secrets. But also a cabal exists in the
highest echelons of the NEWS REPORTING INDUSTRY.

Maybe it was Illuminati Masonic Slimefeeding REPTILES that told reporters know what news they can or can't report. Who knows. But what's fershure is that what YOU get to read is written by self censoring. EMBEDDED NEWSMEN who love their 7 figure salaries & happily cooperate with the FASCIST, war loving WHITE HOUSE! HERE on the BACK CHANNELS of the NET you can get a glimpse of the real PLOTS and the PLOTTERS WHO PLOT THEM! HIT THE BEST SITES on the NET & READ, LEARN!

WANT current NEWS WITHOUT THE MEDIA SPIN? Stick to the INTERNET, besides the above site, there are a few OTHER BEST SITES that will give you the truth. Don't even bother getting a newspaper. You don't need grocery coupons. You don't need TV SCHEDULES as you can get those more accurately ONLINE. Google your city, and TV SCHEDULE period. Bookmark that TV page.

PAY ATTENTION to the media sources who can tell you a.) WHO DELIBERATELY CAUSED THE BIG RECESSION and B) WHY? and C.) HOW TO FIX IT and D.) What new gambits they have up their sleeves.

THE WHOLE MORTGAGE MELTDOWN WAS  A TRAP TO STEAL YOUR LIFE SAVINGS. ALAN GREENSPAN came up with those super low interest rates. Who told him to do that? Who do you think?
THE IMF told him what to do. They trapped thousands of home buyers, deliberately! They knew
all those Amateur Night in Dixie banks would crash and they could buy 'em cheap like a lot of plums
spilled on the ground in the Dopey Farmer's orchard. THE IMF IS A BANK, A BIG TUMOROUS
BANK that needs to inhale, chow down on other, little banks to extend its reach into the FIBER
OF SOCIETY!

A HOT STORY:  THE TWO BUSH  BANKSTERS WHO RUINED AMERICA and in TURN TOOK ALL ECONOMIES DOWN TO THE NUB!

WHO UNCAGED the  WALL STREET FLESH EATING ZOMBIES and LET ALL THOSE RICH GUYS RUN AROUND THE WHOLE DAMN COUNTRY WOLFING UP EVERYTHING IN SIGHT?

SOME SAY that it was Senator PHIL GRAMM, (an ardent MC CAIN SUPPORTER) who ended the 75 year old protective LAW created by FDR in 1933 as a cure for the depression and a hedge against it ever happening again --the GLASS STEAGALL LAW that said NO INVESTMENT BANK THAT DID SECURITIES WORK, COULD EVER BE A SAVINGS BANK. Was GRAMM misguided? OR WAS HE GUIDED???

So if it was Senator PHIL GRAMM who got that fine law removed we have to assume it was Gramm's idea, not just an idea that some lobbyists handed ole Phil who was obviously taking orders and didn't realize that the GLASS STEAGALL LAW was the Dutch Boy's Finger in the DYKE as he was taking some serious QUID PRO QUO i.e. MOOLA to get Congress to vote that law out, killing FDR's safety latch. SO -- HANG HIM HIGH!

BUT REALLY, it's MORE LOGICAL to go with the GUYS BEHIND THE SCENES so SOME SAY it was the CHICAGO BOYS who design these 'hiccups' they like to call them, into the system so they can throw the marginals off the carousel and scoop up all the utilities, banks and factories like housewives at a Macy's sale. I say, HANG 'EM HIGH!

SOME SAY it was ALAN GREENSPAN. This kindly seeming gent let loan rates sink lower than a stripper's panties so that all the slobbering plebes who hankered to get their hands on some fine HOME like the yuppies had --- homes that they couldn't really afford --- would lunge and bite. But worse, he shamelessly admitted to Brit Bankers, (in that URL above ^ ) ..when asked HOW could all those PHONY derivatives create prosperity, that small  banks, insurance companies would buy them as investments and it would be their money that Wall Street NABBED! HANG HIM HIGH.

SOME SAY IT WAS THE DUMB CEOS WHO RAN THOSE Banks & LOAN CORPORATIONS.  THE MORTGAGE BROKERS were hungry for the comissions, their BOSSES figured they'd get the houses back when the dummies were foreclosed on, they just didn't forsee that the house would be half and there'd be nobody left to buy it. Real sorry boys. HANG EM HIGH!

SOME SAY IT WAS THE MASTERS OF THE UNIVERSE, the CEOS on WALL STREET. BILL MOYERS DID A FABULOUS SHOW ON THESE BOZOS. FELONS all! Stole from the Public Trust! HANG 'EM HIGH.

Some say it was Sec Treasury Henry Paulson, the man who is widely acknowledged as the architect of the securitized mortgage, architect of the notorious investment scheme that brought the world to its knees, doing all that when he was chairman of Goldman Sachs (the only Wall Street brokerage dynasty unscathed by the credit meltdown). Paulson is now in charge of the GOV BAIL OUT, and in so doing, your life, your home, your retirement, your welfare.  Even as he blames speculators, unscrupulous lenders, and your poor judgment for the crisis. HANG HIM HIGH.

SOME SAY IT WAS BILL CLINTON who ERASED the perfectly fine STEAGALL GLASS LAW restraining WALL STREET which FDR put in place after 1929, to separate Securities Banks from Savings banks forever after...allowing that law to be chopped, minced and flushed -- This ABROGATION event happened on his watch. Power of VETO and all. HANG HIM HIGH!

SOME SAY IT WAS THE BUSHES, AFTER ALL when you descend from PRESCOTT BUSH who was second in command to the #Uno Plutocrat blue blood HARRIMAN FAMILY, you are in bed with WALL STREET!   BTW, they were in bed with the NAZIS up 'til WWII! (In BED WITH TEXAS PETROLEUM ever since!) Chums with the Nazis, working out of love for those corporations over there and their racist ETHOS, they are the original fascists. WHO LET THEM INTO THE WHITE HOUSE? Look in the dictionary under FASCISM, there are the ENTIRE BUSH FAMILY's PORTRAITS. Who else except genetic bedpartners with industry would try to give CORPORATE WELFARE TO ALL THESE FELONIOUS CEOS? BILLIONS of it. 85 BIL to ONE CORP, AIG.  HANG THEM HIGH!

SOME SAY IT WAS REAGAN - The first deregulation ocurred on his watch. READ "RONNIE" also. He let the Wall Street foxes have first blood ---getting them addicted. But he didn't know what he was doing. Hadn't the IQ. Somebody convinced the Gipper that taking down the regs  would be good for business. It was. But the 80's were the biggest RECESSION for the common man ever on record, huge unemployment, inflation. And he's dead, so we can't hang him high.

SOME SAY IT IS THE Mysterious FISHERMAN UP ON THE ROCKS. We reveal the name of the mystery man who bought up all the tastier collapsed banks!  Just the CUI BONUM  alone makes him look guilty! HANG HIM HIGH.

SOME SAY IT WAS THE  WIZARD OF OZ BANKERS (hiding behind THE CURTAIN AT THE IMF AND FEDERAL RESERVE) as they are now CONDUCTING THE FIRE SALE and at same time, BEING THE MAJOR BUYERS of seriously discounted bargain price banks. J.P.Morgan/Chase bought Bears Stearns, WAMU and Bank 1. So don't believe what you hear that they're doing some noble actual bailing out. That whole concept should read" "aquiring valuable banks and insurance companies for pennies. The biggest known HOLDING TANK + cash cow that humanity has, is an INSURANCE COMPANY. So who is Morgan Chase/ Well Chase Manhattan was always David Rockfeller, The Morgans still own their bank. BIG NAMES but  HANG THEM HIGH ANYWAY!

We'll gladly give you a trillion or two BACK!

AND LAST, SOME SAY IT IS THE ILLUMINATI and their non corporeal ALIEN DEMON HANDLERS  who feed on  HUMAN grief. We can't catch those guys, but you can laser ray them from where you sit right now! YEP. FOCUS your third eye beam on the ILLUMINATI DEMONS above. AND SEND THEM A "DIE NOW, you're OBSOLETE" wavelength of laser power followed by a bombast of pure sweet joy,  love, compassion which they really loathe! That alone will kill em!

THE LAST THEORY is that none of it was real. They played us like Lutes. This was the October Surprise to get us to hug the G.O.P with relief. The Market returned to normal in ONE DAY!

Some sort of primitive, atavistic REPTILE mind doggedly gets itself into power. It lies, cheats, steals, trades favors. It gets to the top of the heap because it is UGLY. Then that Reptile mind creates all the events
on our planet called MELTDOWN, FAMINE, JOBLESSNESS, DEPRESSION, WAR, PILFERING and outright THEFT on the LARGE SCALE, SEDUCING, ENTRAPPING, JAILING, BRIBING, CHEATING which is why we have bought politicos, wars, death, disease, killing, plundering, enslavement, unhappy families, miserable children, juvenile delinquents, urban crime and murder.

THE REPTILE MIND created it all and that MIND or lack of true mindfulness  is predominant in many of the "HAVES". What does the REPTILE MIND THINK? It is first chakra, survival oriented. It continually hallucinates some enemy's hungry breath on the back of their ruffled necks.THEY ARE PARANOID. They are old and they remember the FRENCH REVOLUTION. So they continually think ahead, cagy chess games that will distract you, intoxicate you, keep you uneducated, entrap you in debt, poison you with flouride. They fund sports arenas & film studios. They want you to dream pleasant dreams, jack off on trivia, go to sleep, die. They want you in a stupor, watching REALITY TV and having hormone spurts for SPORTS! They want you amusing yourself anyway you want or can. They want you a total addict!

OH YEAH, You think the CIA DIDN'T BRING IN EVERY DRUG that was hot when it was hot? And didn't use the revenue to fund dirty tricks in the third world? This one, tiny buried phalange inside The Agency has SIXTY YEARS OF IMPORTING DRUGS, SINCE WWII. They never stopped once, just added 'new lines & new suppliers.' It's a known, proven FACT! Why? A), secret funding for them. B.) ENTRAPMENT. Flooding market with drugs will isolate the rebel kids and get them jailed. The kids that will try drugs aren't robots. They're rebels. This is a collection trap for smartass kids! Many poor families have a smartass kid or two or three in jail, don't they Well, who put those boys out of commission? These kids saw the hopelessness, they rebelled, they lit up. Once in the drug community, they'd deal. And BINGO. Or should I say BONG!-O! JAIL! We need a pro bono lawyer and a class action suit for entrapment with HUGE settlements for each family! THEY STOLE OUR BOYS!

REALIZE that THE CIA PROFITS FROM WALL STREET INVESTMENTS, HAVING AS IT DOES, FORE KNOWLEDGE OF COUPS, STRIKES, DISASTERS THAT THE AGENCY EITHER CAUSED OR WAS 'IN ON" Duhhhhhhhh! SO THEY give tips to WALL STREET and their own stocks FLOURISH!

<=== BACK TO THE FIX WEBPAGE, SURVIVING WITH UNDER THE TABLE COTTAGE INDUSTRIES called GUERILLA CAPITALISM!