Wal-Mart's Business Plan - TO RUIN MAINSTREET AMERICA, TO EAT IT UP, SWALLOW IT, LEAVING *#(# in its wake. 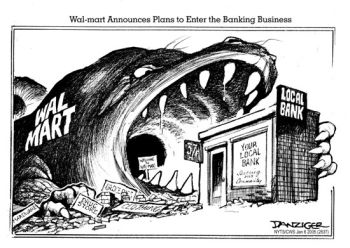 It has destroyed 100,000 small businesses, is breaking the union
movement, has shipped massive amounts of jobs overseas, and has the news
media in it's pocket. They are a version of the Pullman Company, but much
more dangerous.

This is like the Andromeda Strain, where it squares itself on a daily
basis, becoming more ruthless and powerful. The image of "Sam Walton was
just a good old boy" and "Wal-Mart is just a warehouse" is total
propaganda. Wal-Mart is peddling the same nonsense the
Bolsheviks/Communists used in talking the Russians into destroying their
country. Wal-Mart wants you to believe that the company's efficiency,
and size, are responsible for the low prices, but that is total BS.

This girl makes $1.20 an hour. She replaced a Tennessee housewife
that made $14.40 an hour, plus health insurance benefits. The housewife paid
taxes which paid for local schools.

You may be buying a $25 item for $20, but it is slowly wrecking your
economy, and eventually you will be paying full price. Nike shoes pulled the
identical scam, when it gave you $22 sneakers for $12, but as soon as they
bankrupted their competitors, you were paying full price.

A Look At Wal-Mart's Costs

Wal-Mart does $260 billion in annual sales, and $180 billion of it
is the cost of merchandise, and the rest is land, buildings, advertising,
etc. Wal-Mart employs a staff of attorneys and accountants, whose sole
function is to shift expenses to the Federal, State and local governments
aka the tax payer. States pick up health insurance, unemployment taxes, real
estate taxes, electrical, bond financing,etc.

They will negotiate a special fee from their electric power
supplier, and guess who picks up the tab.

Outsourcing To The Third World Is A Giant Swindle

a.. Most of Wal-Mart's $180 billion in merchandise is not made in
America. 60% is from out of the country. Their suppliers may be in America,
but the merchandise, or major components, are made offshore. Not only does a
supplier get cheaper labor, but there are income tax considerations and lax
accounting practices. When you trans-ship a product through a 'No income tax
country', you inflate the bill and pay less income tax in the US.

Made in China Inc Tax
Made in America Inc Tax

Nike, which could be considered to be a "baby Wal-Mart", with it's
Chinese factories, should show a profit of $9 billion on sales of $13
billion, but strangely it only shows a profit of $1.5 billion. China not
only provides cheap prices, but enormous opportunities for scamming thanks
to trans-shipping and no accounting regulations.

When the pair of sneakers leave China, it costs $4.00, but
once it enters the 'Sea of Trans-Shipping', and the 'Land of Mystery
Expenses', the cost skyrockets to $50.00.

By outsourcing the production to China, you
have avoided $5,250 in taxes that pay for schools, unemployment, Social
Security, Medicare and public services.

States and political hacks prostrate themselves to get
Wal-Mart stores in their areas. They will forego 10 years of state income
taxes, five years of property taxes, build the infrastructure (roads and
power).

Why will local politicians go along?

A super center can cost $20,000,000, and the average skim is
10%. Whose family owns the land Wal-Mart builds on? You have the general
contractor who hires favored subcontractors, and there is lots of room for
ghost employees and service contracts. There is the always the next
election. The same newspapers, that overlook Wal-Mart's predatory practices,
can quickly destroy a political career.

Governors Agree...... "What's good for Wal-Mart is good for my state".

Wal-Mart employees, who are considered under the Federal Poverty
level, qualify for special state programs. They get low cost, first class
health insurance, paid for by the state.

Companies must pay unemployment taxes (15% average) on their total
payrolls. Wal-Mart has a 40% turnover rate, but their tax rate is miniscule.
They document their employees where they won't qualify for unemployment, and
the state boards gladly accept their versions.

Janitors, mostly illegal aliens, clean the stores at half the price
a $7.85 'Associate' would. When the INS does an occasional investigation,
then the sub-contractors quickly go under. But not to worry, for they
quickly start life under a new name.

Guess what ~ These 'Low cost workers' wind up sticking five kids in
the public school system, and the local hospitals are deluged.

Is the United Food and Commercial Workers union 'Taking a Dive'?

Wal-Mart could be at the bargaining table in a month if the
teamsters were serious about holding them accountable, coupled with the help
of the popular press pushing public opinion. Wal-Mart employee's union dues
would be worth $250 million a year.

Wal-Mart's official union stance. Maybe some lucky officials are
looking the other way?

The company provides a 401k and profit sharing. They use the
employees' pension plans to buy Wal-Mart stock.

In 2001, they moved their world-wide purchasing headquarters to
China.

As salaried 'Associates aka Comrades', these people can forget about
overtime.

What Is Wal-Mart Doing

Wal-Mart facilitates the export of high-paying manufacturing jobs
through outsourcing to China. They do it, and their suppliers do it. Because
of their pay, and benefit scale, they are hiring illegal aliens. Work for
Wal-Mart and you get a Visa, and in two years a 'Green Card', and now Poppa
and Momma can come in and get $150,000 heart by-passes. Instead of sending
their five kids to school in their home country, the children can now can go
to a good public school here. President Bush even has schools providing
$45,000 a year teachers so children of illegals can learn English.

The local community floods Wal-Mart with tax breaks. The outsourcing
destroys American jobs, and the subsequent taxes. Your schools and
communities become third world sewers, and your hospitals sound like a
Berlitz class.

But hands down, the biggest scam is Wal-Mart's stock. Billions have
been transferred to the Waltons, and their special investors, by the
Wal-Mart 401k program, and 220,000 smaller investors.

Poster's note. Small is Beautiful. Google that term. Grow your own vegetables and fruits. Shop your local artisans. Make clothing with seamstresses, buy food from small markets, go out for meals at local small cafes. Steer clear of  Walmart. Or you will be eating the heart out of your town. 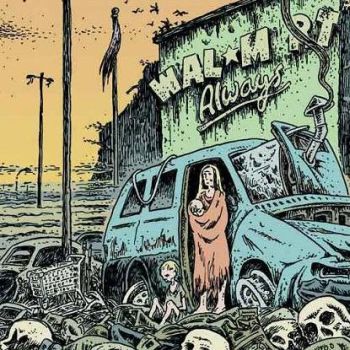