THIS IS WHAT AMERICA OWES AS OF FEBRUARY 2009 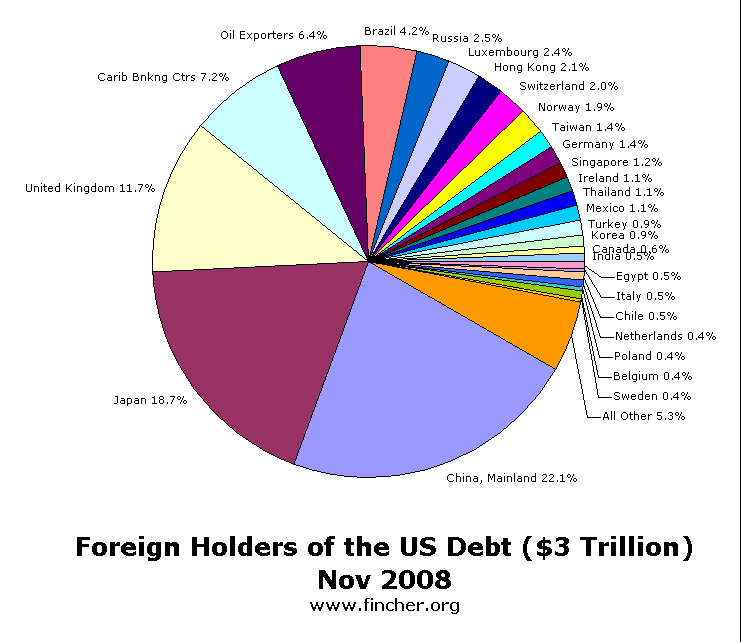 China Has Doubts about EVER GETTING PAID BACK!

What if you lived in a posh MANSION, had tons of servants, ran profitable lawsuits right and left (kindof like resource wars,) making all your pals the lawyers rich? And what if...at the same time, you did it off the backs of the highly taxed PEONS in your own borders and fifty ton LOANS from all your rich pals abroad who admire you and consider you the King of the Jetset?  That's what's happening on planet earth today. THE HEAD LEMMING feeds on DEBT, runs the biggest PONZI scheme out there and is going to take the other lemmings with him. THE US of A!

China is right to have doubts about who will buy all America's debt. Chinese doubts about the value of US Treasury bonds highlight a crucial question: who will buy the estimated $2.7 trillion (£1.9 trillion) to $4.2 trillion of debt expected to be issued over the next two years? With annual foreign purchases accounting for less than a tenth of the low end of that range, and domestic investors unable to bridge the gap, the Chinese are right to worry. Yu Yongding, former adviser to the People's Bank of China, recently demanded guarantees for the value of China's $682bn of Treasury securities. Then Luo Ping, director of the China Banking Regulatory Commission, said that China had misgivings about the US economy, but despite this it would continue to buy Treasuries. The two statements appear designed to raise the issue non-confrontationally before new chief US diplomat Hillary Clinton's visit to Beijing on February 20.

China worries about the dollar's value against other currencies, particularly the yuan. With US interest rates so low, the dollar's value may slide. However, President Barack Obama has repeatedly said he wants a strong
dollar, and indeed its trade-weighted value rose 13.9% between April and December 2008.

The other area of concern for China is the value of its Treasuries. Given the US borrowing requirement and its lax monetary policy, Treasury bond yields could well rise sharply, causing a corresponding price decline. If
China's holdings match Treasuries' average 48-month duration, then a 5% rise in yields, from 1.72% on the 5-year note to 6.72%, would lose China 17.5% of its holdings' value, or $119bn.

Foreign buyers have absorbed a little over $200bn of Treasuries annually, a
useful contribution to financing the $459bn 2008 deficit, but only a modest
help towards the $1.35 trillion minimum average deficit forecast for 2009
and 2010.

Unless that changes substantially, there will be $1trillion annually to be
raised by the Treasury from domestic sources, more than double the previous
record from domestic and foreign sources together, plus whatever is needed
to bail out the banks.

Even if the US savings rate were to rise from zero to its long-term average
of 8% of disposable personal income, that would create only an additional
$830bn of savings -- not enough to fund the domestic share of the deficit.
Interest rates would probably have to rise substantially to pull in more
foreign investors.

Yu is right to worry. You would be in your rights to worry, too!

FOR MORE ON WHO USA OWNS CASH TO: http://mitchfincher.blogspot.com/2009/01/which-foreign-countries-own-us-debt.html
source of graphic above.