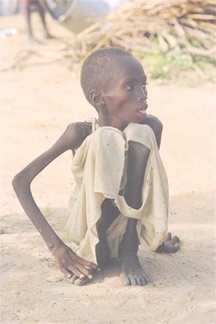 Poor child nutrition still causes major problems in the developing world - despite some progress, experts say.A third of deaths in children under five in those countries are linked to poor diet, a report by Unicef suggests. It also reveals 195million children - one in three - have stunted growth.  Unicef said the number of underweight children also remained high, with many countries struggling to hit official targets to halve the figures. An estimated 129million children are underweight.Meaning brains are diminished capacity.

Rates of stunted growth are higher because while some children may be a normal weight - in fact some can even be overweight - the food they are getting is of such poor quality they they have growth problems.

Experts warn that such a condition is often irreversible and effectively condemns children to a lifetime of poor health.

"Unless attention is paid to addressing the causes of child and maternal under-nutrition today, the costs will be considerably higher tomorrow."

HOW TO TACKLE THE PROBLEM Give to these TEN GROUPS: https://www.thespruceeats.com/charities-that-fight-hunger-1666012

# Poor nutrition has traditionally been a problem for Peru
# In 1999, the government, in partnership with Unicef and the US International Development Agency, set up the Good Start in Life programme

# A national program is now being rolled out. See PERU's DE SOTO PLAN CAN BE DONE IN ANY THIRD WORLD COUNTRY.

The organisation has pinpointed the first 1,000 days of life as the key period in which to tackle the problem. It said promoting breastfeeding as the exclusive source of nutrition for the first six months and continued breastfeeding until at least two was essential. For that to happen, mothers need a great diet. As any modern mother knows, breast feeding is difficult unless one over-eats. In Mexico, women know that plenty of grain, beans and oats will do the job. (Anita's note). For that reason they drink corn atole between meals. But an adequate western diet would be better.

Unicef said that providing access to food supplements was also an important part of the solution.

Many aid programmes are focusing on iodised salt to aid brain development and vitamin A supplements, which help bone growth and the body's ability to fight infection.

Such steps, the report suggested, could reduce deaths by a fifth.

Monitoring schemes- Unicef said that together with its partners, which include governments and international aid agencies, it was making progress to improve nutrition for children in the 150 countries it was working in.

Indeed, since 1990 the proportion of children underweight in the developing world has fallen by a sixth, according to figures compiled from Unicef's own monitoring schemes and data provided by other bodies such as the World Health Organization and World Bank.

And stunted growth rates have dropped by a quarter over the same period.

Nonetheless, just 63 out of 117 countries look like they will meet the Millennium Development Goal of halving the rates of underweight children between 1990 and 2015.

Progress has been particularly poor in Africa. Asia is performing a little better, although India is making little progress, while South America is making some significant strides.

Kitty Arie, a senior policy adviser at the Save the Children charity, also pointed out poor nutrition had long-term consequences, including lower school performance.

"This is an urgent issue that can and must be tackled."

"We have to work more effectively with our development partners and national governments to make nutrition a priority."

Our POSTER is ANITA SANDS HERNANDEZ, Los Angeles Writer, Researcher, Mother of 4 and career Astrologer.  Catch up with her websites  TRUTHS GOV WILL HIDE & NEVER TELL YOU, also The  FUTURE, WHAT'S COMIN' AT YA! FRUGAL LIFE STYLE TIPS,  HOW TO SURVIVE the COMING GREAT DEPRESSION, and Secrets of Nature, HOLISTIC, AFFORDABLE HEALING. Also ARTISANRY FOR EXPORT, EARN EUROS...REPUBLISH all 7,000 REALITY 101 SEMINARS FREE, ATTRACT AD REVENUE to your SITE.  Anita is at astrology@earthlink.net ). Get a 15$ natal horoscope "my money/future life" reading now + copy horoscope as a Gif file graphic! No smarter, more accurate career reading out there!

<==== BACK TO THE SHOW BUSINESS ARCHIVE, for wannabe directors,writers, documentarians

<====HOW TO TINKER WITH OTHER PEOPLE's BRAINS for big $, no license, no degree. CALL IT TANTRUM YOGA!

<==== GO TO "HOW I CAN START" A MICROLOAN BANK WORKING WITH a  BANK and get a very decent salary for my charitable work.


<===BACK TO THE FILM MAKER'S INDEX PAGE for writers, producers and documentarians


<===BACK  TO VULTURE SANDWICH WEBSITE, CHARITABLE IDEAS WE CAN CONVERT INTO PAYING JOBS FOR OURSELVES