MASSIVE honey bee die off. IMPLICATIONS for sudden dip in the food supply

Albert Einstein predicted that after the honey bee leaves the planet, humans had only 4 years left before they ALSO died off.   NATIONAL GEOGRAPHIC says that we have HALF THE BEES that we should have and a lot of food is going to disappear: But fans of food, there's HOPE. Actor  TONY BANDERAS is now the ARCHETYPAL TV AD BEE, playing the NASONEX Sad bee with a big case of sinusitis, so I'm taking that as  a good sign. BEES WILL SURVIVE and the Human species can go on eating. 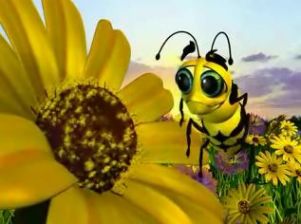 However, the reality is that there seems to be a bigtime BEE DIE OFF, possibly due to CELL PHONES  and possibly due to a VIRUS:    And the truth is that a MITE caused the virus. READ ABOUT THAT.

Is there really a MITE problem and a KASHMIR BEE PLAGUE which really came from NEW ZEALAND...and a die off (which scientists do seem to be alarmed about? In the San Fernando Valley, bees by the thousand go after my stinky broccoli flowers. Preferring those to the apricot which I have to hand pollenize with pollen from a neighbor's tree. SO HARD TO DO even on lower branches that I FEAR for a bee die off.

UNIVERSITY PARK, Pa. -- An alarming die-off of honey bees has beekeepers
fighting for commercial survival and crop growers wondering whether bees
will be available to pollinate their crops this spring and summer.

Researchers are scrambling to find answers to what's causing an
affliction recently named Colony Collapse Disorder, which has decimated
commercial beekeeping operations in Pennsylvania and across the country.

"During the last three months of 2006, we began to receive reports from
commercial beekeepers of an alarming number of honey bee colonies dying
in the eastern United States," says Maryann Frazier, apiculture
extension associate in Penn State's College of Agricultural Sciences.
"Since the beginning of the year, beekeepers from all over the country
have been reporting unprecedented losses.

"This has become a highly significant yet poorly understood problem that
threatens the pollination industry and the production of commercial
honey in the United States," she says. "Because the number of managed
honey bee colonies is less than half of what it was 25 years ago, states
such as Pennsylvania can ill afford these heavy losses."

A working group of university faculty researchers, state regulatory
officials, cooperative extension educators and industry representatives
is working to identify the cause or causes of Colony Collapse Disorder
and to develop management strategies and recommendations for beekeepers.
Participating organizations include Penn State, the U.S. Department of
Agriculture, the agriculture departments in Pennsylvania and Florida,
and Bee Alert Technology Inc., a technology transfer company affiliated
with the University of Montana.

"Preliminary work has identified several likely factors that could be
causing or contributing to CCD," says Dennis vanEngelsdorp, acting state
apiarist with the Pennsylvania Department of Agriculture. "Among them
are mites and associated diseases, some unknown pathogenic disease and
pesticide contamination or poisoning."

Initial studies of dying colonies revealed a large number of disease
organisms present, with no one disease being identified as the culprit,
vanEngelsdorp explains. Ongoing case studies and surveys of beekeepers
experiencing CCD have found a few common management factors, but no
common environmental agents or chemicals have been identified.

The beekeeping industry has been quick to respond to the crisis. The
National Honey Board has pledged $13,000 of emergency funding to the CCD
working group. Other organizations, such as the Florida State Beekeepers
Association, are working with their membership to commit additional
funds.

This latest loss of colonies could seriously affect the production of
several important crops that rely on pollination services provided by
commercial beekeepers.

"For instance, the state's $45 million apple crop -- the fourth largest
in the country -- is completely dependent on insects for pollination,
and 90 percent of that pollination comes from honey bees," Frazier says.
"So the value of honey bee pollination to apples is about $40 million."

Frazier says to cope with a potential shortage of pollination
services, growers should plan well ahead. "If growers have an existing
contract or relationship with a beekeeper, they should contact that beekeeper as
soon as possible to ascertain if the colonies they are counting on will be
available," she advises. "If growers do not have an existing
arrangement with a beekeeper but are counting on the availability of honey
bees in spring, they should not delay but make contact with a beekeeper and
arrange for pollination services now.

"However, beekeepers overwintering in the north many not know the
status of their colonies until they are able to make early spring
inspections," she adds. "This should occur in late February or early March but is
dependent on weather conditions. Regardless, there is little doubt that
honey bees are going to be in short supply this spring and possibly into the summer."

A detailed, up-to-date report on Colony Collapse Disorder can be found
on the Mid-Atlantic Apiculture Research and Extension Consortium Web site
at http://maarec.org.

HAND POLLINATING can be done if you have the money. Imagine all those wetbacks and. ALIENS standing on ladders with a sable brush. If you think PICKING your fruit was hard on wetbacks, wait til you see the man hours chalked up POLLINATING entire fruit trees. Then tomatoes? Then SEEDS? like at the seed corporations? Wheat is a seed. So how do we get bread? ALL FOOD is pollinated. Beef eat Grain and all grain seeds are pollinated, barley, rye,  WHEAT. Only a few seeds (like corn) are produced by air born or WIND pollinated seed, but this is not true of most other food staples.

Face it, we WILL NEED MUSLIMS AND MEXICANS in wholesale amts or you starve. Cuz your kids aren't gonna get out in the garden with sable brushes! So stop the war, invite a Muslim to live in your guest house to pollinate each grain of wheat. Nobody else will have grain; you will. And the muslim's wife knows how to grind it and make chapatis!

THIS JUST IN: CELL PHONES CAUSED BEE DIE OFF. Not only are cells giving humans brain tumors, it's doing bad things to bees.  This is from scientists so it has to be taken into consideration. If fones are doing that to bees from miles away--what are laptops doing to our LAPS?

THIS JUST IN: NORWAY IS SAVING ALL THE SEEDS in a DOOMSDAY VAULT!

OSLO, Norway (AP)—It sounds like something from a science fiction film—a doomsday vault carved into a frozen mountainside on a secluded Arctic island ready to serve as a Noah's Ark for seeds in case of a global catastrophe.

But Norway's ambitious project is on its way to becoming reality Monday when construction begins on the Svalbard Global Seed Vault, designed to house as many as 3 million of the world's crop seeds.

Prime ministers of Norway, Sweden, Denmark, Finland and Iceland were to attend the cornerstone ceremony on Monday morning near the town of Longyearbyen in Norway's remote Svalbard Islands, roughly 620 miles from the North Pole.

Its purpose is to ensure the survival of crop diversity in the event of plant epidemics, nuclear war, natural disasters or climate change, and to offer the world a chance to restart growth of food crops that may have been wiped out.

The seeds, packaged in foil, would be stored at such cold temperatures that they could last hundreds, even thousands, of years, according to the independent Global Crop Diversity Trust. The trust, founded in 2004, has also worked on the project and will help run the vault, which is scheduled to open and start accepting seeds from around the world in September 2007.

The Svalbard Archipelago, 300 miles north of the mainland, was selected because it is located far from many threats and has a consistently cold climate.

Those factors will help protect the seeds and safeguard their genetic makeup, Norway's Foreign Ministry said. The vault will have thick concrete walls, and even if all cooling systems fail, the temperature in the frozen mountain will never rise above freezing due to permafrost, it said.

While the facility will be fenced in and guarded, Svalbard's free-roaming polar bears, known for their ferocity, could also act as natural guardians, according to the Global Diversity Trust.

The Nordic nation is footing the bill, amounting to about $4.8 million for infrastructure costs.

"This facility will provide a practical means to re-establish crops obliterated by major disasters,'' Cary Fowler, the trust's executive secretary, said in a statement, adding that crop diversity is also threatened by "accidents, mismanagement and shortsighted budget cuts.''

Already, some 1,400 seed banks around the world, most of them national, hold samples of their host country's crops.

But these banks are vulnerable to shutdowns, natural disasters, war and lack of funds, said Riis-Johansen.

Storing duplicate seeds in the Svalbard vault is meant to offer a fail-safe system for the planet.

The idea of a global seed bank has been around since the early 1980s, but unresolved issues, such as ownership rights to genetic material, stalled it until the U.N. Food and Agriculture Organization adopted the International Treaty on Plant Genetic Resources for Food and Agriculture in 2001.

While Norway will own the vault facility, countries contributing seeds will own the material they deposit—much as with a bank safe deposit box. The Global Crop Diversity Trust will help developing countries pay the cost of preparing and sending seeds.