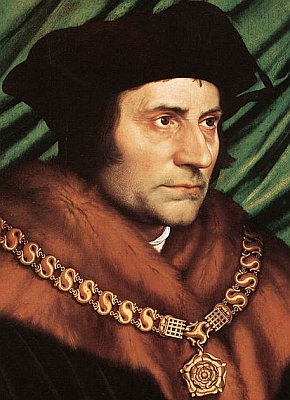 Greetings, I am your Pro-Bono Lawyer--
Sir Thomas More. Who has wronged you?

I just spotted a story about some teeny weeny legal clinic freebie lawyers pursuing huge cases against the city and government agencies which had done horrible things to the citizens, to  really poor people. The group is called WELFARE WARRIORS. Great name, no? This is a charity that should have a branch in every city in America! But it doesn't as it has no young lawyers to open these offices. Are you going to graduate law school soon? They're looking for YOU! See:
http://www.welfarewarriors.org/LAWYERS_WANTED.htm

I do not know of a single  GROUP of pro bono lawyers working for people but occasionally one hears about freebie legal clinics being out there. I'm imagining that we don't HEAR about them or their cases as these groups need one thing beside anonymity,  that is fired up baby lawyers, fresh out of Law School. hot to trot, idealistic and fiery to do Big, fat Tort cases against government agencies that pursue cruel and heartless methods of sucking money out of the poor. People whose houses are taken by city when they can't pay heat bill?  Happens a LOT!

ANOTHER thing that happens a lot. INTAKE workers at the hospital question parents and find some detail that will allow them to RE-PO the children and sell them to rich ADOPTIVE PARENTS. Think NOT? BABY THEFT GOES ON ALL OVER AMERICA. What's the next kind of hustle the system will do? For which you need a good lawyer? HOW ABOUT YOUR NEXT MOST VALUABLE POSSESSION, the HOUSE? And that house theft happens in greater numbers when banks won't let owners refinance.  Those guys who say they'll fix your mortgage and then don't. Like OBAMA, the American president said? So we need to find free lawyers and use pro bono lawsuits, class actions and tort suits to get them. Watch your old GOOD WIFE episodes on CBS.

As it happens, this is a new and fertile field to plow. There's PRO BONO work galore out there for you, law school kids. Don't even knock on the door of the big posh law firms. Above all don't become part of the problem working for City attorney or even being a PUBLIC PRETENDER (public defender, right.) as they do not care one bit for the poor citizen and will not defend them in the least.  They are rodeo clowns who corral the starving, jobless into lucrative city programs. Lucrative for the city. So legal tyros? If you're man enough, go pro bono. If you're already employed, making the big moola, QUIT those big cash cow consortiums you work for. Quit city hall which just squeezes the money out of poor chump citizens. IMAGINE doing FEISTY, MEANINGFUL WORK! http://www.welfarewarriors.org/LAWYERS_WANTED.htm has some ideas.

See, 'cause say a man has no job, he slaps his wife when she buys a new dress and shoes. The wife calls the police, the average slapper ends up paying 1500$ for anger management classes, one a week for a year and if he misses a class or a payment, goes to jail. Leaving his family starving. Or say the father chooses to boost a pound of hamburger for the kids and gets caught, same thing a year of classes costing with 1500 pounds of hamburger would cost! And during that time, his children don't even have RICE.

Why do those in power punish PETTY THIEVERY to sustain life and they do NOT DEAL with the problems that the BANKSTERS left us? The MORTGAGE BANKERS and BOGUS MORTGAGE LEIN FIXERS have stolen American blind. We have to include the President in this. They are the thieves yet we're rounding up the starving masses to punish, charge huge fees, take their cars away from them when they can't pay fees, take their homes away when they can't pay for heat? Again, that  Happens a LOT!

We can put an end to the misuse of power. Luckily the few Lawsuits that go up against the BANKSTERS are working and are bringing in huge class action settlements. CountryWide Mortgage just lost a case, has to repay the victims billions. Unfortunately the victims were rich people who INVESTED in the company, not the house buyers who were sold faulty mortgages. Variable rates being as faulty as the brakes of a Toyota. But maybe a PRO BONO Lawyer will appear who wants to do THAT lawsuit. The world needs PRO BONO LAWYERS to go after those greedy, tyrannical corporations that beat up on the poor and go after GOVERNMENT itself,  on the city, state and federal level, and MAKE THEM PAY!

Our POSTER is ANITA SANDS HERNANDEZ, Los Angeles Writer, Futurist, mother of 4 and career Astrologer. Catch up with her websites  TRUTHS GOV WILL HIDE & NEVER TELL YOU, also The  FUTURE, WHAT'S COMIN' AT YA! FRUGAL LIFE STYLE TIPS,  HOW TO SURVIVE the COMING GREAT DEPRESSION, and Secrets of Nature, HOLISTIC, AFFORDABLE HEALING. Also ARTISANRY FOR EXPORT, EARN EUROS... Anita is at astrology@earthlink.net ). Get a 35$ natal horoscope "my money/future life" reading now + copy horoscope as a Gif file graphic! No smarter, more accurate career reading out there!

<===BACK TO HOW TO RAISE A BABY TO BE BEYOND EXCELLENT!