TALE OF THE GOLDEN (REVOLVING!) DOORS.

WHO IS TREASURY SECRETARY HANK PAULSON? Not a nobody! An ex-Nixonite whose personal Fortune is estimated to now be 700 MILLION CLAMOLAS! He assured his place at the trough when he gave 336,000 GIFT to the G.O.P to become a BUSHITE! Nothing says lovin' like something from the wallet, with these boys!
from WSWS.org

The plan to rescue the US financial industry gives virtually 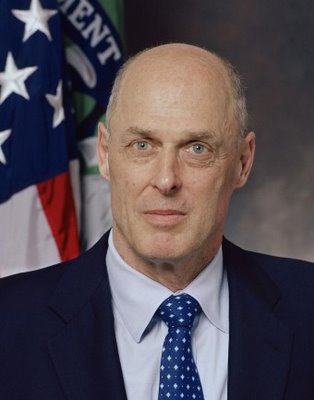 unlimited money and power over the financial affairs of the state to the office of Treasury Secretary Henry Paulson. Paulson is a figure with a long history of intimate connections to the political and financial elite. In 1970, fresh from the Masters program of the Harvard Business School, Paulson entered the Nixon administration, working first as staff assistant to the assistant secretary of defense. In 1972-73, Paulson worked as office assistant to John Erlichman, assistant to the president for domestic affairs. Erlichman was one of the key figures involved in organizing President Richard Nixons notorious plumbers unit that carried out illegal covert operations against the presidents political opponents, including espionage, blackmail, and revenge. Ehlichman resigned in 1973, and in 1975 he was convicted of obstruction of justice, perjury, and conspiracy, and was imprisoned for 18 months.

Utilizing his connections, Paulson went to work for Goldman Sachs in 1974. In a 2007 feature, the British newspaper the Guardian wrote, Not only was he well connected enough to get the job [in the Nixon White
House], but well connected enough to resign in the thick of the Watergate scandal without ever getting caught up in the fallout. He went straight to Goldman back home in Illinois.

Paulson rose through the ranks of Goldman Sachs, becoming a partner in 1982, co-head of investment banking in 1990, chief operating officer in 1994. In 1998 he forced out his co-chairman Jon Corzine in what amounted to a coup, according to New York Times economics correspondent Floyd Norris, and took over the post of CEO.

Goldman Sachs is perhaps the single best-connected Wall Street firm. Its executives routinely go in and out of top government posts. Corzine went on to become US senator from New Jersey and is now the states governor.
Corzines predecessor, Stephen Friedman, served in the Bush administration as assistant to the president for economic policy and as chairman of the National Economic Council (NEC). Friedmans predecessor
as Goldman Sachs CEO, Robert Rubin, served as chairman of the NEC and later treasury secretary under Bill Clinton.

Agence France Press, in a 2006 article on Paulsons appointment, Has
Goldman Sachs Taken Over the Bush Administration? noted that, in
addition to Paulson, [t]he presidents chief of staff, Josh Bolten, and
the chairman of the Commodity Futures Trading Commission, Jeffery
Reuben, are Goldman alumni.

But the flow goes both ways, the article continued, Goldman recently
hired Robert Zoellick, who stepped down as the US deputy secretary of
state, and Faryar Shirzad, who worked as one of Bushs national security
advisors.

Prior to being selected as treasury secretary, Paulson was a major
individual campaign contributor to Republican candidates, giving over
$336,000 of his own money between 1998 and 2006.

Since taking office, Paulson has overseen the destruction of three of
Goldman Sachs rivals. In March, Paulson helped arrange the fire sale of
Bear Stearns to JPMorgan Chase. Then, a little more than a week ago, he
allowed Lehman Brothers to collapse, while simultaneously organizing the
absorption of Merrill Lynch by Bank of America. This left only Goldman
Sachs and Morgan Stanley as major investment banks, both of which were
converted on Sunday into bank holding companies, a move that effectively
ended the existence of the investment bank as a distinct economic form.

In the months leading up to his proposed $700 billion bailout of the
financial industry, Paulson had already used his office to dole out
hundreds of billions of dollars. After his July 2008 proposal for $70
billion to resolve the insolvency of Fannie Mae and Freddie Mac failed,
Paulson organized the government takeover of the two mortgage-lending
giants for an immediate $200 billion price tag, while making the
government potentially liable for hundreds of billions more in bad debt.
He then organized a federal purchase of an 80 percent stake in the giant
insurer American International Group (AIG) at a cost of $85 billion.

These bailouts have been designed to prevent a chain reaction collapse
of the world economy, but more importantly they aimed to insulate and
even reward the wealthy shareholders, like Paulson, primarily
responsible for the financial collapse.

Paulson bears a considerable amount of personal responsibility for the
crisis.

Paulson, according to a celebratory 2006 BusinessWeek article entitled
Mr. Risk Goes to Washington, was one of the key architects of a more
daring Wall Street, where securities firms are taking greater and
greater chances in their pursuit of profits. Under Paulsons watch,
that meant taking on more debt: $100 billion in long-term debt in 2005,
compared with about $20 billion in 1999. It means placing big bets on
all sorts of exotic derivatives and other securities.

According to the International Herald Tribune, Paulson was one of the
first Wall Street leaders to recognize how drastically investment banks
could enhance their profitability by betting with their own capital
instead of acting as mere intermediaries. Paulson stubbornly
assert[ed] Goldmans right to invest in, advise on and finance deals,
regardless of potential conflicts.

Paulson then handsomely benefited from the speculative boom. This wealth
was based on financial manipulation and did nothing to create real value
in the economy. On the contrary, the extraordinary enrichment of
individuals like Paulson was the corollary to the dismantling of the
real economy, the bankrupting of the government, and the impoverishment
of masses the world over.

Paulson was compensated to the tune of $30 million in 2004 and took home
$37 million in 2005. In his career at Goldman Sachs he built up a
personal net worth of over $700 million, according to estimates.

After Paulsons ascension to the treasury, his colleagues at Goldman
Sachs carried on the bonanza. At the end of 2006, Paulsons successor
Lloyd Blankfein was handed over a $53.4 million year-end bonus, while 11
other Goldman Sachs executives raked in $150 million in year-end bonuses
combined. That year, the top investment firms Goldman Sacks, Morgan
Stanley, Merrill Lynch, Lehman Brothers, and Bear Stearns handed out $36
billion in bonuses. At the end of 2007, the executives of the same
firms, excepting Merrill, were handed another $30 billion.

NOW, to view the decision he made today, or has been told to make:
TREASURY SEC PAULSON sez I WILL tolerate No limits on CEO pay! YEAH, he
was CEO of GOLDMAN SACH where he tucked away 700 BILLION! So mebbe
that's WHY! So is he qualified to run the US TREASURY??? HUH?

This half is written by Barry Grey

Speaking on the Fox News Sunday program, US Treasury Secretary Henry
Paulson opposed proposals from some Democrats as well as Republicans
that the Bush administrations plan for a massive taxpayer bailout of
the most powerful banks and financial institutions include provisions
limiting the pay of CEOs whose companies benefit from the government
handout.

Paulson, the former CEO of Goldman Sachs whose wealth is estimated at
$700 million, argued that including any such provision would result in
banks refusing to participate in the program.

As the New York Times reported Monday, Mr. Paulson said that he was
concerned that imposing limits on the compensation of executives could
discourage companies from participating in the program.

If we design it so its punitive and so institutions arent going to
participate, this wont work the way we need it to work, Mr. Paulson
said...

Working people who are being told by both parties that they will have to
foot the bill for the biggest corporate bailout in world
historyestimated by the government at $700 billion, a conservative
figure that underestimates the actual cost of the planshould consider
the implications of Paulsons statements.

He, President Bush and other political figures in both parties are
insisting that quick Congressional passage of the bailout scheme is
critical to averting an economic and social calamity at least as great
as the Great Depression of the 1930s. There is, they insist, no time to
discuss, debate, or even think.

The universal mantra is the need for all Americans to come together,
put aside their partisan differences and personal interests and accept
the need for sacrifice in support of the common goodwhich just
happens to coincide with the interests of Wall Street and the
multi-millionaires and billionaires who control it.

But Paulson, in his weekend television appearances, was obliged to
implicitly acknowledge that there is one segment of society that is not
prepared to sacrifice a dime and will not hesitate to throw the country
into a depression, if the alternative is the slightest diminution in its
seven- and eight-figure compensation packages.

In spite of his intentions, Paulsons comments demonstrate the utter
fraud of the claims that the plan to place the national wealth at the
disposal of Wall Street is driven by concerns for the well-being of the
American people. His remarks reveal the most basic truth about American
society: The interests of the overwhelming majority of the people are
entirely subordinated to the money-mad strivings of a financial
aristocracy.

The plutocrats call the shots. They determine public policy. They
exercise an absolute veto on all decisions taken by the government,
which is, in the final analysis, an instrument for the defense and
advancement of their narrow and socially destructive interests.

The constant invocations of patriotism are purely for public
consumptiona means of blinding the people to the class relations that
dominate America.

The logical conclusion that flows from Paulsons own statements on CEO
pay is that the greatest problem the country faces is the very class he
defends and embodiesthe American capitalist class. Its removal through
the independent political and revolutionary mobilization of the working
class is the precondition for a rational and democratic solution to the
crisis.

<====== BACK TO THE MASTERS OF THE UNIVERSE BUSTED "MELTDOWN" WEBPAGE