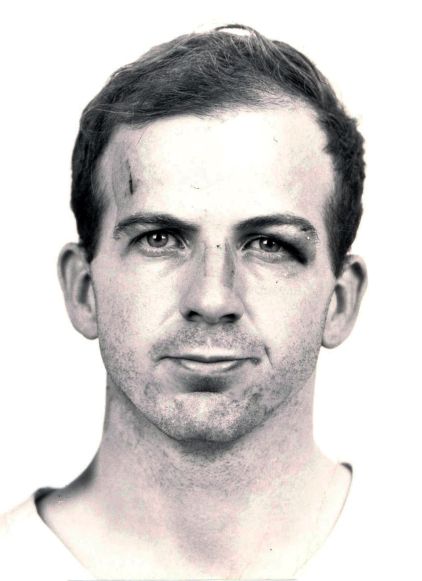 From Oct. 15 until Nov. 22, 1963, Lee Harvey Oswald, alleged assassin of President John F. Kennedy lived in the next room at her Granny's boarding house.  [AUTHOR'S NOTE: If you want to name the actual assassins of JFK they were Lyndon Johnson, H.L. Hunt, Gen. Edward Lansdale & some other CIA guys and LBJ’s insider Texas businessmen] for 5 weeks Lee lived in the Oak Cliff section of Dallas, Texas, at 1026 N. Beckley Ave., where Lee rented a tiny room for $8 per week.

Pat Puckett Hall’s grandmother, Gladys Johnson, owned the home at that time and Patty Hall interviewed with me recently about her interactions with Oswald as an 11 year old girl. [Pat Hall was born in 1952]

Hall said the home was purchased by the family in 1940 and was not originally intended to be a rooming house, but because orphans were in need of housing she decided to open up rooms for rent in the mid-1940s. Johnson also owned other nearby properties including a small café.

Hall and her 2 younger brothers lived with their mother, Fay, just 4 blocks east of the rooming house. “So it was very convenient for my brothers and I to come here to my grandmother’s house every day after school and wait until mother showed up. That’s why we knew Mr. Oswald and the majority of the other roomers that lived there,” Hall explained.

Johnson employed a housekeeper, Earlene Roberts, to oversee the home and roomers. Hall said Roberts was a bit odd and tolerated having kids around. “She would have been happy if we were not around,” she said.

On Oct. 15, 1963, Oswald rented a room under a false name, O.H. Lee. I asked Hall if she had any idea why. She did not, but knew that doing so caused an argument between Oswald and his wife Marina when she once tried to reach Oswald at the rooming house by phone. “We had no idea he used a fake name,” Hall said. [Oswald was a CIA operative and FBI informer who was spying on the pro-Castro Cuban community]

According to Roberts’ Warren Commission [the machine gun-riddled Warren Report which lied about so many things] testimony, Oswald never talked, didn’t respond when spoken to and would even give Roberts a dirty look as a response. Hall said she couldn’t speak to that, but as an 11 year old, “we knew a totally different side of him. Anytime he was here with my brothers and me he would stop whatever he was doing, go outside and play with my brothers.”

She added that Oswald was quiet around adults, but never saw him give dirty looks and did respond to people. “It was going to be a short conversation. He never spoke about politics, never said anything negative about Kennedy or the administration. So he gave us absolutely no red flags.” [Lyndon Johnson, however, in private would often make death threats about Robert Kennedy and often swore he would slit his throat if it was the last thing he did. See Robert Caro, The Passage of Power, p. 140]

Roberts testified that on Nov. 22, she received a call from a friend telling her to turn on her television, Kennedy had been shot, so she did. As she was tuning the television, Oswald hurriedly walked in. [This is about 1PM which is precisely why Oswald did not kill Officer Tippit who was murdered maybe at 1:06 PM 9/10ths mile away] He had taken a cab and told the cabbie to drop him off in the 500 block of Beckley, presumably so he could take a look at the rooming house as the cab went by, surveillance, to see if anything was going on. [Maybe he just doesn’t want anyone to know where he lives including the cabbie.] Roberts spoke to him but got no reply.

Oswald went to his room, grabbed a jacket and his .38 Smith & Wesson revolver and left. Roberts then noticed him standing to the right of the bus stop. Warren Commission findings say Oswald went to the left and ended up at 10th and Patton Streets where he shot and killed Dallas Police officer J.D. Tippit. [Hot garbage. Please read Joseph McBride’s Into the Nightmare published in 2013. Total frame job on Oswald.]

While Oswald was briefly at the house a police car pulled up and honked the horn. Roberts, who said she was blind in her right eye, couldn’t be sure of the number, but thought it might be officers Alexander and Brurnely (car No. 107) because she knew those officers and they would stop by occasionally.

Some researchers wonder if the car number could have been No. 10, which was Tippit’s car number. Hall said it likely was not Tippit, but that he was in the Oak Cliff area. “What I doubt is the significance of it (the honk). If I hear it (a honk) once a day I hear it 50 times a day,” said Hall, as she explained how traffic backs up at the stop light there very near the house.

A short time later Oswald was arrested at the Texas Theater. Hall’s mother owned an art studio across the street from the theater and witnessed the arrest. “She then closed the studio, came to school and picked up my brothers and me just seconds after the principal came on the air and told us the president was gone.” Once at home the kids were not allowed to watch TV until Sunday, Nov. 24.

On the 24th the family watched as “Mr. Lee” was shot by Jack Ruby during a transfer from city to county jail. “My brothers were hollering ‘that’s Mr. Lee, that’s Mr. Lee.’ My mother jumps up again and turns off the TV and sits us down to explain to us what’s been going on,” Hall said. Hall added that her mother told the children to not talk about any of this with anyone.

In 2013, Hall turned her 1026 N. Beckley Ave. home into a museum, which by appointment can be toured. She kept the effort low key and sought help to partner with the Sixth Floor Museum at Dealey Plaza, which did not happen.

Hall said it was because she wouldn’t back the Warren Commission conclusions. [How long will the elites cling to the lone nutter fantasy?] “There’s too many questions,” Hall said. She added that she sees her job as putting a new face, a new perspective on the man she knew as Lee Harvey Oswald as a little girl.

The house is filled with original 1963 items including furniture, fixtures, wallpaper and the bed frame and dresser in Oswald’s room. Also original is the telephone Oswald used to call Marina.

In a later conversation with Hall she told me there was a time when Oswald received a call and that the caller spoke Spanish. [Our good ole CIA connected anti-Castro Cuban friends likely] Robert’s initially took the call, but didn’t understand the language, so she asked Fay to listen in on an extension. Hall said her mother listened briefly and recognized the language as Spanish.

This is interesting for a couple of reasons. First, research puts Oswald in proximity with anti-Castro Cubans and at the same time belonging to a pro-Castro group, the Fair Play for Cuba Committee. [CIA asset Oswald was the only damn member of the New Orleans chapter of Fair Play for Cuba and Jack Ruby on Friday night Nov. 22nd knew the correct name of this group!] Some speculate he may have been meeting with members of the violent anti-Castro group called Alpha 66.

Plus, there is a report made by Buddy Walthers of the Dallas County Sheriff’s Department, dated Nov. 23, 1963, in which Walthers reports Cubans had been hanging out at 3128 Harlandale Street which is just a couple of miles from the rooming house. The report also states that Walther’s informant told him Oswald had been seen at this house.

Secondly, how did this Spanish-speaking caller get the rooming house number? How did the caller know Oswald lived there?

We then walked through the small house and when we stood in Oswald’s tiny rented room I asked her what she thought happened on Nov. 22, 1963. Hall said it was her opinion that Oswald was CIA and involved in a conspiracy, but does not believe he fired any shots. [My take is Oswald was purely a pre-selected CIA patsy for the JFK assassination with no involvement whatsoever.]

As our interview ended, Hall told one more story about Oswald and her brothers. She said the brothers got into a fight in the front yard and Oswald stepped in to break it up. Hall said he told them, as brothers, they shouldn’t fight, they should take care of each other and never do anything to harm another human being. “I’d say that speaks volumes as to the core of the man,” Hall concluded. [LBJ always believed in killing the rattlesnake (the Kennedys) before it got to you.]

Our POSTER is ANITA SANDS HERNANDEZ, Los Angeles Writer, Futurist, researcher, mother of 4 and career Astrologer. Catch up with her websites  TRUTHS GOV WILL HIDE & NEVER TELL YOU, also The  FUTURE, WHAT'S COMIN' AT YA! FRUGAL LIFE STYLE TIPS,  HOW TO SURVIVE the COMING GREAT DEPRESSION, and Secrets of Nature, HOLISTIC, AFFORDABLE HEALING. Also ARTISANRY FOR EXPORT, EARN EUROS... Anita is a FUTURE READER in more ways than ONE She can do your NATAL HOROSCOPE. Write her at astrology@earthlink.net ). Get a 35$ natal horoscope "my money/future life/ mate/ sweetheart/ child destiny" reading now + copy horoscope as a Gif file graphic! No smarter, more accurate astrologer out there!

<=== BACK TO THE PROPAGANDA TRICKS GOV USES ON YOU, ARCHIVE

<=== BACK TO THE PSYCHOLOGICAL UPGRADES, A NEW WAY TO EARN A LIVING, no LIC, Degree req'd.

<===BACK TO STUDIES ON THE PSYCHOLOGY OF EMPIRE, GLOBAL ELITE