You never want to have a kitten die on you! 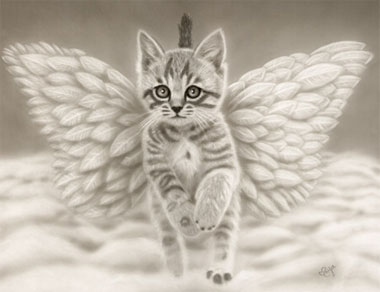 As kittens are so cute and adorable, the grief of loss is immense for children and adults both. This loss can trigger a depression in an adult as there's nothing more pathetic than the sweet, lovable innocence of a kitten being snuffed out. It is very close to the parental sense of loss for a human child, if a child were to die. But in children, it creates a sense of God being bad of "Fate" being random, horrible, dangerous.

A.) HUMAN FEET. The friendly, hyper VISITOR is the single greatest danger to a kitten. Your happy, huge friends don't watch where they walk, whereas you mostly do. Ask all visitors to give you notice so that you can move the litter to a back bedroom. Never let even a single human into your house without plopping the group in a basket and carrying them to sheltered area then returning to open the front door. BECAUSE THE SECOND BIGGEST DANGER IS DOORS, EVERY DOOR IN THE HOUSE!

Your own children are included in this warning as they run and often with big shoes on, so it boils down to this. The litter must be in a back bedroom or office that they do not enter or use. The Laundry room is frequently popular for children's passage to the back yard, so that isn't the safe spot. Kittens have been known to climb into dryer vents and get roasted when you dry the clothing so that's no good. Kittens also use vents to go outside and get lost. The Garage is not vented properly and goes to l00 degrees at noon. Kittens easily can have brain strokes, resulting in paralysis, so that's not advisable. Create a litter room. If the  Queen is used to going outdoors, don't trap her! Unfasten the screen and remove it and leave the window ajar so that Momma Cat can go in and out when she wants. Put a chair below window on both sides for easy leaps. When babies are big enough to be safe, you can refasten the screen.

If you don't have such a space, when strangers cold-call you, don't even open the door until you've said 'let me put the kitties in another room.'

B.) IMPROPER FEEDINGS with EYEDROPPERS. You never want to use an eyedropper any more than you have to. Inhalation is likely and the cat dies of pneumonia from foreign liquids in his lungs, or he drowns in a few seconds if it's enough liquid. Neither is pretty.. When you use eyedroppers, remember, you're on coffee and Coca-Cola and are going a hundred miles an hour and that cat can not suck as fast as you're going and could inhale some of the milk. It is better to put a kitten near a dish many times a day and put a fingertip in the milk, then in their mouth & let kitty figure it out. Invest time in those precious lessons.

C.) ADOPTION by uninformed strangers. Keep all children and adults other than family out. They fall in love and demand a gift and will push and fight you until you give one up just to get rid of them. Solve the problem by heading them off at the pass. DO NOT TELL ANYONE your cat had kitties. EVER!

D.) NEIGHBORHOOD DOGS. Those cats cannot be anywhere a dog can suddenly unexpectedly run in to...and dogs can leap gates, they can and will run up your front walk and come up onto porch or enter even enclosed front patios. That little furball getting his knickers in a hissy fit and putting his tail up will not stop him from becoming a casualty. Neighbors are walking their dogs without leashes. The dog proudly attacks the litter on your front porch just to show his master how brave he is.

E.) Critters that go bump in the night. You don't see the wild life, but they're there. Outside resident mothers and their litters are in danger of coyotes, bears, foxes and possums. If you cannot persuade a mother to move her litter to a back bedroom, there will be fur tacos out in your garden at night. But there's a danger you could never imagine. NEIGHBORHOOD WILD TOM CATS will enter your house at night if there is any cat door left open. They will find the litter and eat the babies. When you are not around, close the mother in a room with food, water for herself, and if kittens are feeding on solid food, a dish of something for them. I close the house completely at night in kitten season.

F.) fleas and other parasites. Kittens are easy to bathe and deflea in hot weather. Any sunbeam provides a place for you both to sit while you towel the baby and spot fleas that didn't drown. Kittens actually vacuum the house of fleas, attracting them to a tiny body so easy to clean. In cold weather, use the bathroom sink & the bathroom wall heater! Pick off all the fleas that you see while kit is floating or swimming on his back, getting soaped up with a fragrant bar of "IRISH SPRING" with its piney aroma. Then, sit outside for a moment as under natural bright light, the other fleas will show up, immobilized in the fur, showing up as penny bright copper bugs. Let your fingernails grow a tad so you can pick it out, drop each in cup of slightly soapy water.

G. FAILURE TO THRIVE - Stress in the mother turns into this mysterious condition called "Failure to Thrive" and a lot of kittens fall by the wayside. Let Darwin do his work, his way, and don't drag these weak kitties to a Vet and spend hundreds of dollars for a hopeless situation. Invest in the best foods for the mother, plenty of clean water, changed regularly, supplement feed with an eyedropper. FORMULA: drop egg yolk into pot of water almost at a simmer. Ten seconds later, remove, drop into milk. Stir and put that short cup back in boiling water to heat milk slightly. Just take the chill off it. Use eyedropper. If your tip encounters yolk, it won't suck so aim around the yolk skin

H. HEAT STROKE & PARALYSIS - As kittens are born during warm weather and are delicate for the entire span of summer, high temps create a particular hazard: HEAT STROKES and paralysis can take them. Like any stroke victim, the brain hemhorrages and the victim can no longer move! So watch that your kittens not only can get enough liquid from short little dishes near them but see that you hydrate them yourself frequently with an eyedropper. They don't always know what thirst sensation is, they don't know to approach a dish, even if you provided one low enough for them. You have to go around giving extra water if the ambient temp is high. If you have money to burn, then keep the AC on and keep them indoors. Get a swamp cooler put up on top of house using a ceiling vent in a central room. These are cheap to run, will fridge the place up BETTER than an AC! I have jungle front and back so hose every leaf thirty feet high in both gardens many times a day to create a cool wind which covers the entire property.


A POME:
Kitten season has me down
i'm not up to date on work!
i wake too early; sleep is scant
go straight to eyedropper work.

the orphan kits are slow to grow
I've been feeding for four weeks.
they still don't eat from any plate
wait for Mom to wake and make squeaks.

My eyes are sunk, my head's in swoon
two ounce kittens make life a Hell.
I'd wean the little mothers soon
Like to cook a dinner well!

But my own kids not doable now
The cats have me at their will.
I wake and sleep and feed and eat
And collapse again sans pill.