IN HIS FINAL INTERVIEW, THE LATE NOBEL LAUREATE
ISAAC BASHEVIS SINGER GRAPPLED WITH THE NATURE
OF GOD, EVIL, LOVE AND THE UNIVERSAL HUMANITY
OF THE HOLOCAUST.

Master in the Shadows 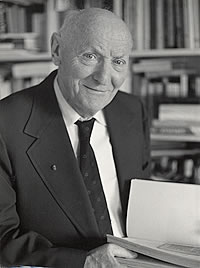 BY NORMAN GREEN | The late Isaac Bashevis Singer used to write in the
mornings. Afternoons, he strolled down Upper Broadway. He stopped along the
avenue to eat a meatless meal and to feed the birds. He carried bank books
and thousands of dollars in his pockets too, in case he needed to flee New
York in a hurry. He believed that "It" could happen again.

Born into a line of great rabbis said to be so holy they performed
miracles, the young man from the shtetl of Radzymin, Poland, rebelled
against Jewish law. He worshipped his older brother, secular Yiddish writer
Israel Joshua Singer, and followed his path, first to the writer's club in
Warsaw, then finally to America. He took his mother's Hebrew name,
Bathsheba, and made it his pen name in Yiddish, Bashevis. Fleeing Hitler,
Singer arrived in America in 1935 penniless and knowing only one English
phrase. Broke, despondent after the unexpected death of his brother here
and the loss of his world in the Holocaust in Europe, he wrote nothing for
seven years. But he went on to become one of the most prolific literary
masters of the modern age. His mission: to make the world of the Jews
immortal.

Singer said he served two idols -- the idol of literature and the idol of
love. But, he said, "The need to believe in God is as strong as the need
for sex."

Critics called him the "Yiddish Scheherazade." He published one or two
stories or chapters a week in "The Forward," a Yiddish newspaper, for more
than 40 years. He published 45 volumes of short stories, novels, children's
tales, plays and memoirs, in translation. In 1978 the Swedish Academy
awarded him the Nobel Prize in literature.

Singer wrote about the cabalists and Hasidim of peasant villages in "Gimpel
the Fool" and "Satan in Goray"; about the writers, criminals, communists,
scholars and mystics of Warsaw in "Scum" and "The Spinoza of Market
Street"; and about the survivors of New York City and Tel Aviv in "Enemies,
A Love Story" and the newly translated "Shadows on the Hudson."

In his last interview, on a winter Friday in 1987, Singer sat in his
Broadway apartment framed in gray light between two windows, sun setting on
the Hudson River, the Sabbath approaching.

Life's agonizing puzzles had inspired his career: How could such terrible
things happen? Were tragedies designed by God's will? Do we do evil of our
own free will? Are we possessed by demons?

"Of course I believe in free will," Isaac Bashevis Singer said. "I have no
choice."

Singer's health fell apart shortly after that afternoon. He sat poolside in
Florida and stared vacantly. He cried out for his dead brother. He failed
to recognize family and friends. But translators continued to bring his
work to the marketplace after Bashevis was no longer able to write; indeed,
after he passed away.

"Shadows on the Hudson," his fourth posthumous novel, traces two years in
the lives of survivors desperately longing for meaning in this world or the
next, seeking it in money, love, Judaism, science, the supernatural.

In your stories and in interviews you show that you believe in free will in
men and women, yet --

I believe in free will in men and women. Plus, I even believe that there is
a higher thought or free will in animals.

Yet you're also known to believe in sprites and demons. In your work, imps
destroy people by using their passions against them. They use sex, love,
money and even -- in "A Crown of Feathers" -- the passion to know God.

I would say that I believe in free will and I believe at the same time in
destiny. It seems to be a contradiction but it is not a contradiction. In
other words, all our passions and everything were not created just by us.
They have been created by higher powers. At the same time we are given some
choices to make; we have to make these choices between good and evil. If
not, we could not exist.

How do we know which is good and which is evil?

We don't know. Because I am not sure that God has revealed himself to one
man or another and told him exactly what he considers good and what he
considers bad. However, we all have a feeling that things which destroy
society, which destroy civilization, which make life miserable for others,
are bad, and things which help people live and progress are good. I know it
isn't very objective, but we don't have any other measure, or any other
information, so we must rely on this.

You've said in an interview that free will is one of God's greatest gifts
to us, yet we don't use it. How should we use it?

I will tell you. We should be able to make decisions and stick to them. And
keep them. It's not enough to make decisions, the main thing is to keep
them. The Ten Commandments were a type of decision, which Moses and the
other Jews made. We did not keep it to the very end. When they went to
Israel, they did very often the opposite. The Ten Commandments are a very
good example of what decision-making would do, if we would really keep
them.

I have read that you conduct little experiments on your own with
decision-making: Today you will sit and work for three hours. You won't
waste time reading yesterday's newspaper, or staring out of the window for
hours or talking on the phone.

Decisions are very important. If you can keep them, more power to you. If
you cannot, all I would say is, "Try again." We can never relax. We can
never stop trying. We must try again and again and again. The very fact
that you are here, you are talking to me, you are a journalist, you have a
job, means that you have kept some decisions. If you would have let go, you
would have been in some asylum, or God knows where you would have been.
This is true about you and about people whoever they are. If we don't keep
decisions, if we cannot keep them, we are lost.

You have said that literature must first of all entertain -- otherwise, who
is going to read it?

Of course. Those writers who just cry on the shoulders of the reader and do
nothing else, they don't inform enough, and they don't entertain enough.
So, because of this, all their experiments become of no value whatsoever.

I will tell you. The information is pragmatic. The very fact that when you
read a novel, you learn about a country, or about an environment, has
already done things for education. And if at the same time your spirit is
entertained, the writer has really reached his goal.

But this pragmatic value that you mention is much more mundane than I would
have expected. Don't you have hopes in your heart that your work will open
our eyes in some way or open our hearts?

I personally, when I sit down to write, I don't say I'm going to write
something which will open your heart and your brain and make you a better
human being. But I know from hundreds of letters and interviews and
meetings with people that my work did do something for their lives. Because
all of these love letters which I get have some meaning. I don't mean
sexual love. They say to me that it's good that I got the Nobel Prize, I
should have gotten more prizes and more things. Those people who are so
grateful to me, I see that I have done something for them. While I don't do
it with intention, there must be some hidden intention in it. Because I
believe in something more which we didn't speak of until now. This is that
God is behind everything.

God is behind everything?

He is behind everything. Even when we do things against him, he's also
there. No matter what. Like a father who sees his children doing a lot of
silly things, bad things. He's angry with them, he's punishing them. At the
same time, they're his children. I believe in this kind of Godly power. So
nothing is lost completely because the Father is still watching his
children, no matter what they are doing.

You have said that if you were to invent a religion, it would be a religion
of protest.

I will tell you what I mean: Because human nature and nature generally do
not show, do not reveal to us any clear way or idea what we should do, what
we do is all guesswork. We are made to guess things when we really cannot
guess. Actually, much of our morality is built on doing things against
nature. Nature would tell you that if you see a beautiful woman, throw her
down and rape her. This might be human nature. But something higher than
this tells you that if you do this, you destroy society, you destroy
yourself, your children and many generations after.

So in a way, we cannot just all the time give compliments to the Almighty
and praise him and say, "You are good." We have a feeling of protest. Why
has he made this whole ordeal for us to suffer? I think that one can admire
God, admire his wisdom, and at the same time protest his so-called
neutrality. I don't think religion is against it. The great religious
leaders were also protesters in their own way. The Book of Job is a book of
protest. And so are many great books, and great revelations.

I notice that you have said, "Man was born to suffer. Given half a chance
he will dash his brains out on the rocks."

Why do we choose misery?

Because one moment you love; the other moment you hate. One moment you want
to help; another moment you want to destroy. We have been cursed with
emotions which create havoc in our lives. Because of these emotions, there
is never really any rest. To serve humanity, to serve civilization, you
have to be stronger than your emotions. And this is a struggle so difficult
and so terrible that we are never free from it But we have to go through
with it.

Don't you think we risk losing romantic love if we conquer our emotions?

We risk losing everything. We risk losing our love, our bed, our apartment,
our food. Life itself is one big risk from beginning to the end, and maybe
free will came to us to help us.

Why is it that I see very little direct mention of the Holocaust in your
work?

Oh yes, well I mention it a lot of times in my book "Enemies, A Love
Story." The only thing is, I think that the whole of human history is one
big Holocaust. It is not only Jewish history. We can call human history the
history of the human Holocaust. Whether Russians are killed or Germans or
Jews or Arabs or others, it is one big Holocaust. This is what we made with
life because we did not choose anything better and we did not keep our
promises. We did not act according to our choice.

We did not act according to our choice?