The Rich Are Hogging Our Common Inheritance -- 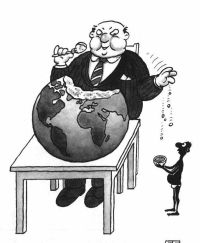 We Must Take It Back  Technological progress ... has provided society with what economists call a "free lunch," that is, an increase in output that is not commensurate with the increase in effort and cost necessary to bring it about. -- Joel Mokyr, Lever of Riches: Technological Creativity and Economic Progress (1990) Warren Buffett, one of the wealthiest men in the nation, is worth over $60 billion. Does he "deserve" all this money? Why? Did he work so much harder than everyone else? Did he create something so extraordinary that no one else could have created? Ask Buffett himself and he will tell you that personally he thinks that "society is responsible for a very significant percentage of what I've earned." But if this is true, doesn't society deserve a very significant share of what he has received? Buffett may not know it, but he has put his finger on one of the most explosive issues developing just beneath the surface of public awareness. In recent decades researchers working in a broad range of economic, technological, and other fields have clarified much more precisely than in the past the many ways "society" contributes to the creation of "wealth" -- and, accordingly, how relatively little any one individual can be said to have earned and "deserved." Their research, in turn, raises profound moral -- and ultimately political -- questions that are becoming increasingly difficult to avoid. At the heart of this revolution in understanding is a fundamental reconsideration of the extraordinary role of knowledge in economic growth -- and of how ever-increasing knowledge, accumulating across the generations, is central to the creation of all wealth.

The distribution of income and wealth in the United States is more
unequal today than at any time since the 1920s. The following study
shares with Buffett a fundamental skepticism toward the belief that the
nation's extraordinary inequalities are simply a natural outgrowth of
differences in individual effort, skills, and intelligence. "We didn't
rely on somebody else to build what we built," banking titan Sanford
Weill tells us in a New York Times front-page story on the "New Gilded
Age." "I think there are people," insists another executive, "who
because of their uniqueness warrant whatever the market will bear."

The new research findings suggest that such views are profoundly wrong
-- but for reasons that go well beyond Buffett's general view and,
indeed, beyond the understandings that until recently have been common
among specialists concerned with these matters. Often in history
something dramatic is brewing in the quiet work of scholars -- something
the public doesn't know about or understand until much, much later.
Einstein's famous E = mc equation meant absolutely nothing to most
people when it was first published in 1905 -- but it hit the world
literally as a bombshell when atomic weapons exploded in 1945. The
sophisticated mathematics Claude Shannon worked out in the 1940s laid
theoretical groundwork for the digital communication that today ramifies
into every corner of domestic and global life. The structure of DNA was
deciphered by scientists in 1953, but the public is only now beginning
to realize just how radically genetic engineering may revolutionize
medicine, food production, and many other important fields.

"Unjust Deserts" suggests that something at least as portentous as these
extraordinary developments is silently emerging among scholars studying
the sources of wealth, and that once the implications are fully grasped,
it too is likely to have dramatic implications -- in this case for the
distribution of income, wealth, and power throughout society. It
suggests, moreover, that this new understanding and the steady evolution
of the knowledge economy, combined with growing social and economic pain
and set against a backdrop of ever-worsening inequality, are likely to
contribute to potentially massive political change as the twenty-first
century unfolds. Consider the following truth: a person working today
the same number of hours as a similar person in 1800 -- and working just
as hard (and no harder) -- can obviously produce many, many times the
economic output. Recent estimates suggest that national output per
capita has increased more than twenty fold since 1800. Output per hour
worked has increased an estimated fifteenfold since 1870 alone.

Consider further that the modern person on average is likely to work
with no greater commitment, risk, or intelligence than his counterpart
from the past.

What is the primary cause of such vast gains if individuals do not
really "improve"? The answer is obviously more productivity -- more
output from the same level of input. And self-evidently what this means
is that we are more productive as a society. But how does a society
become more productive if individual effort and intelligence remain
relatively constant? Clearly, it is largely because on the whole the
scientific, technical, and cultural knowledge available to us, and the
efficiency of our means of storing and retrieving this knowledge, have
grown at a scale and pace that far outstrip any other factor in the
nation's economic achievement. "The central phenomenon of the modern
age," economic historian Joel Mokyr observes, is quite simply "that as
an aggregate we know more."

A half century ago, in 1957, the future Nobel Prize-winning economist
Robert Solow calculated that nearly 90 percent of productivity growth in
the first half of the twentieth century (from 1909 to 1949) could only
be attributed to "technical change in the broadest sense."

The supply of labor and capital -- what workers and employers contribute
-- appeared almost incidental to this massive technological "residual."
Subsequent research inspired by Solow has continued to put a spotlight
on "advances in knowledge" as the main source of growth. Another highly
respected economist, William Baumol, argues that "nearly 90 percent ...
of current GDP was contributed by innovation carried out since 1870."
Baumol judges that his estimate, in fact, understates the cumulative
influence of past advances: even "the steam engine, the railroad, and
many other inventions of an earlier era still add to today's GDP."

Looked at another way, if today's high earners are typically highly
educated, this is clearly not primarily because they are more
intelligent or work harder, and it is not mainly because they were lucky
in the "birth lottery," as some argue. Above all, they are highly
educated because there is more knowledge for them to obtain and more
opportunity to do so. "A college-educated engineer working today and one
working 100 years ago have the same human capital," Stanford economist
Paul Romer observes. But the engineer working today is far, far more
productive. The reason, again, is self-evident: "He or she can take
advantage of all the additional knowledge accumulated as design problems
were solved during the last 100 years."

Today a society's "stock of knowledge" and its "technological state" are
the subject of intense discussion by scholars and policy makers. An
obvious truth that emerges from their work is also clear and lies at the
foundation of the following study: All of this knowledge -- the
overwhelming source of all modern wealth -- comes to us today through no
effort of our own. It is the generous and unearned gift of the past. In
the words of Mokyr, it is a "free lunch."

An obvious question arises from these facts: if most of what we have
today is attributable to advances we inherit in common -- what another
economic historian, Nathan Rosenberg, has termed a "huge overhang of
technological inheritance" -- why, specifically, should this gift of our
collective history not more generously and broadly benefit all members
of society? Once the modern understandings are fully grasped, today's
distributive realities become much harder to ignore: the top 1 percent
of U.S. households now receives more income than the bottom 120 million
Amercans combined.

The richest 1 percent of households owns nearly half of all individually
owned investment assets (stocks and mutual funds, financial securities,
business equity, trusts, non-home real estate). The bottom 90 percent of
the population owns less than 15 percent; the bottom half of the
population -- 150 million Americans -- own less than 1 percent.

If America's vast wealth is mainly a gift of our common past, how,
specifically, can such disparities be justified? Although a great deal
of research has been done on knowledge and economic growth -- and
although one can find related moral reflections scattered throughout the
work of many writers -- very few have dealt directly with the equity
issues posed by our scientific and technological knowledge inheritance.
We seek to remedy this large-order gap in public understanding. We hope
thereby also to contribute to shaping new policies appropriate to the
era of the knowledge economy.

Gar Alperovitz is the Lionel R. Bauman Professor of Political Economy at
the University of Maryland. His previous books include The Decision to
Use the Atomic Bomb and America Beyond Capitalism. He lives in
Washington, D.C. Lew Daly is a senior fellow at Demos and the author of
God and the Welfare State. He lives in New York City.