EVERY SINGLE AMERICAN WORKER IS A MINDLESS SLAVE TO THE IRS. BUT HERMAN  GOLDMAN IS JUST a LITTLE MORE SO! 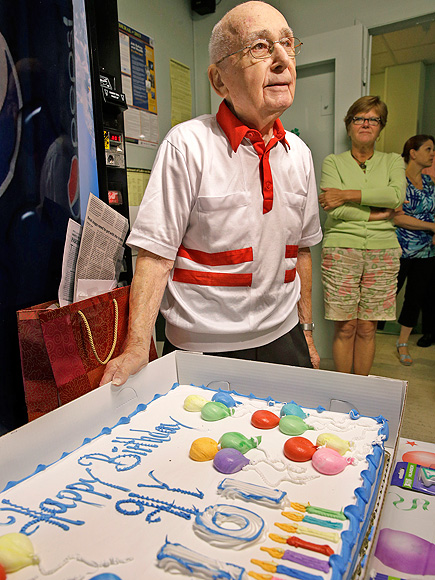 Herman Goldman celebrated his 101st birthday with colleagues after 73 years in the same store !

Lighting repair specialist Herman "Hy" Goldman, 101, stands in his workshop at Capitol Lighting where he has worked for 73 years  He is not just being celebrated for his birthday though the 101-year-old man from New Jersey celebrated his birthday with colleagues on Monday. They are celebrating the fact that he has 73 years in the same job. Herman "Hy" Goldman works four days a week at light fixtures company Capitol Lighting in New Jersey.

Apart from a brief absence to serve in the US Army in World War Two, (!) Mr Goldman has worked at Capitol Lighting since 1941. The store said Mr Goldman was first hired to sell stock and clean the displays. (Lesse, he was 27 years old, so not a rocket scientist to pick that job) Colleague Sandy Ronco said Mr Goldman now specialises in rebuilding items that were damaged or unusable.  Mr Goldman still drives himself to work.

-----
OK. Now before we roast him let's toast him. Lift your cup to a good man, a true American or maybe a Buddhist. Because he never gets bored, is desireless as a monk. Now let's ROAST him. How much $$ did poor, stupid 101 yr old Herman the electrical worker pay into his social security account over 73 yrs of screwing in lightbulbs? A MILLION? TWO? Maybe more. His pension is certainly several million FAT. No mention of a wife to collect it as a widow, so nobody's going to collect it. Although HERMAN probably  started collecting his OWN PENSION at age 65. He's Jewish so count on it, he did. Then he's been living on his pension and his salary for nearly forty years. Sounds great but US GOV, MILITARY and IRS and CIA and NSA were eating MOST of it all that time.

As Herman continued to earn a SALARY after age 65, he'd have been paying taxes on his social security AND on his earnings. SO THE USA has taxed this ONE GUY steadily in a majestic PONZI SCHEME for nearly forty years. The USA has dined out on Herman, waged wars on Cuba, Vietnam, Russia, Afghanistan, Grenada, Panama, Iraq and killed MILLIONS OF HUMANS on industrious HERMAN's DIME! And it's done this IRS PONZI to all the other millions of geezers who kept working after retirement. Are they valorous citizens? Money grubbing smarties? Nahhh. They are hard wired simpletons, mindless robots who let themselves become accustomed to a BORING RUT. Showing up at work and working til JULY for the IRS is not a sign of life! Fishing off the rocks at your beach cottage is, growing apples with your grandkids on your country farm, having a screening room for the family... I could go on and on...
HERMAN GAVE HIS  LIFE TO THE GOV WHICH TURNED THAT energy, lifeblood and money into DEATH in wars, into abrogating Glass Steagall, inventing GATT/ NAFTA, FUNDING WALL STREET, MAKING A PRISON ECONOMY. I could go on and on........

What a waste. While it's true that EVEN people who inherit a lot of money soon discover they have to keep working, (it is human nature to be part of a society where we serve each other) But doing what kind of work? Screwing in lightbulbs? There's honor in that?

HERMAN shows us where the American people have become ordinary, in a plodding hamster mind mode. A country's genuine GREATNESS lies in a sense of the Utopian contribution one could make, a mission that overrides that hamster habit of just going to work every morning. Uf we work finding dollar homes for the poor to rehab. Every city espec detroit area, has condemned homes. A tiny little  girl with a reality show on DIY and HGTV, name of Nicole Curtis buys Victorian ladies built in 1912 for a buck, rehabs them. Someone should start a charity that walks lower case families thru a renovation of an old house. Working for money is banal  but because we live on a planet of deprivation, we believe this work ethic is needed. Work at Walmart after retirement, no matter HOW MUCH YOU KNOW. You hardly get paid but also your contribution will never manifest. HAPPY HERMAN the hamster is a master electrician To think what he could have delivered to humanity with DETROIT type old homes standing empty, and lower case families homeless. RENOVATIONS so very needed! This would not mean giving up money. You start a charity, you are allowed to salary yourself generously.

<== BACK TO GUERILLA CAPITALISM, INCLUDE THE IRS OUT!

<== BACK TO HOW TO START A CHARITY & SALARY YOURSELF