THE HAND OF BARACK OBAMA ANALYZED 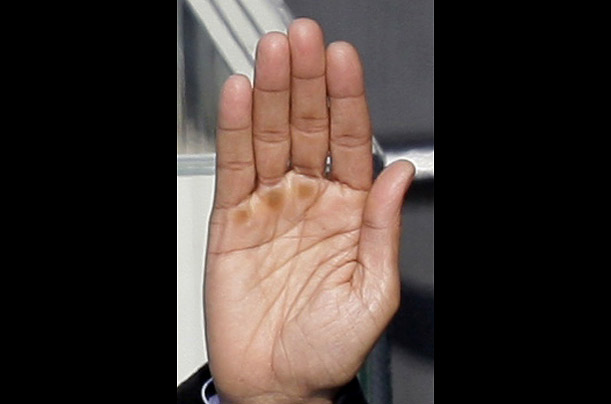 THE LONG THIN HAND- is the monkish personality found in Kenya, Ethiopian ethnicities; they're spiritual, Utopian, gentle, delicate. Descended from EGYPTIANS. They are not men of war, but they will fight over right and wrong. Very ethical. Very mental, too. The Academics of Africa. Strong verbal skills. You can't imagine this physical type out on the football field.

The first thing you will see is TWO lifelines. That is a person with exceptional vitality. They never get ill. And just under the 'inside' lifeline, the ORALITY line. Cooks, chefs have it, and people who must keep a cigarette or gum in their mouth full time. He was one such for a long time.

The next thing you see is the dark SPOTS at top which are just callouses from Pumping iron. Grasping very heavy weights causes skin to get very thick; so those dark spots are just from muscle building exercise. JUST? Doesn't that penchant show extreme interest in keeping his manly figure buffed up? Yes. Vanity even. So read for it.  The gypsy uses all cues that fall her way. Say a client's jewelry is all real or what if it's fake? The former, she chose the right husband. The latter, she only wishes and maybe you can help her in the area of love.

Now for a man like our president, the reader knows in advance that he/she can't get close to the theme of his love life. Because of his thumb which shows that he's secretive. SEE HOW the THUMB is totally closed tight to the hand? This is a man who is actively keeping secrets right now. It took muscular effort to close that thumb! Most of us present our hand, the thumb is hanging out like a gate left open. If ever you see a hand with a tightly closed gate, be bold, tell your client that YOU KNOW he's actively keeping secrets right now, while you watch his face. First you'll see 'wow, she's right,' on his face. Then go on a little expedition. Bring up the various types of secret that you imagine are there seeking the 'flinch.' Festoon it with verbage. "Well, I know you're dealing with Wall Street, and that money line on your hand is huge... keep watching his face, not the palm. for signs of the flinch.

"And you have this second romance line and the ham of hand is much fatter there than with the first marriage line, so you're seeking a really passionate union..." Go on take chances. Nobody's listening. You've got Obama by the hand and nobody's recording his reactions. Of course, they're facial, not verbal.

Before you start reading palms at parties, catch that new Fox TV drama, "LIE TO ME" which is absolutely amazing in depicting the facial expressions that give people away. It's practically an FBI course in noting multiple reactions, pulse spots, facial coloration, the moue of the mouth, eye. Do not miss that TV show.

Speaking of research on guessing character and learning to spot clues,  take a look at my  PALMISTRY SEMINAR, online. Print it out, give it away as a gift. On second page of the dozen at that document you will see a drawing of a rather odd thumb ---note that it has some real verve, bent backwards in a circle. That kind of guy keeps NO SECRETS, he'll tell you everything but see how our PRESIDENT's thumb is only tilted backwards very slightly? Enough to be friendly and not a cent more. I'd be certain that most of Washington has straight, erect, rigid thumbs. Dick CHENEY for sure has a totally rigid, straight thumb so he's controlling, suppressive, not lenient.

Now, Sands here, having seen a lot of thumbs in HOLLYWOOD, I'd say that FER SHURE there are thumbs in my town that tilt a lot more backwards. They roll in a half circle and these fellows are usually comedians. Shoot from the hip guys. Ready to rock and roll. OBAMA has the slightest degree of that. Enough to be balanced. Either extremity isn't good. A real bendy thumb will try anything once.

NOTE THE THUMB JOINT. It's the ego bone. If it's huge, like Brando or Ahnold, the Governator, it's a megalomanaic, self-sure, who thinks he's GOD. The thumb bone points outward, is horizontal like marlon in photo below. Now, Obama has a good point on his ego bone, so he's no slouch. Having absolutely NO EGO BONE shows a servile type. Shy, hiding his light under a bushel. Brando and Gov Ahnold have the biggest ego bones I ever saw. The world revolves around THEM!

Back to the president. His whole hand repeats the motif of balance. Note Obama's HEART LINE which is the top horizontal line. The ENDING is in a V do you see it? Like a car that comes home to a choice of two garages. Between Effusive, loving, giving Jupiter finger and then the cold, cautious, careful Saturn finger? OBAMA has two garages or two love gears. One is careful and cautious. The other slightly more effusive. On warm days, he goes for a sail. On cold days, he's like a boat carefully moored to the pier.

Study the early Heart line near ham or edge of hand. He had a second or back-up heart line in his early years. This can represent a secret search also searching and not finding, some emotional confusion, needs unmet.

He has two marriage lines, one at the normal, early time most men marry a second later, much more intense, real love later closer to 50.

Barack has intensely deep lines on the hand, so he's clear and passionate about everything, knows his own mind about all things except that single doublet period we see on the early heart line. That period puzzled him. CHAINS on the heartline are thought to be painful romances but to me, no romance is equally painful. We can only guess what he went through in his teens and twenties. Transits to his HOROSCOPE might be more telling.

Do you see that space or little hole between jupiter and saturn fingers, at the bottom? How you can see sky thru it? Money passes through his fingers! Bet MICHELLE takes care of that life area, or an accountant.

Not a problem. He was dusted with fairy sparkle at birth, born to be King. The man of destiny. Seen by a line from start of life line crossing upwards to MOUNT SUN.

His destiny line has a double foot, balance, half created by those who raised him, half his own efforts but the second leg is what he found out in the world. It takes a village to raise a child.

HEADLINE - Drops south rather than truly horizontal so not interested in business or money. Is a psychologist. A master of reading minds, interpreting character. Be a great palmist.

LIFE LINE - Cut deep, wide, very vital, indefatigable. There are two of them. At root of hand, in the area ruling the mouth, he has the ORALITY line. Any child with that needs to be breast fed for as long as the child wants. These are great foodies, cooks in later life. All cooking show hosts have it. At parties, I go read for the chef in the kitchen and see that the true foodies have a career line rising from that area. WHen my fave tv cuisine hosts put their hand near the lens, holding a flan or a carrot, I quick check to see if they have the ORALITY line. Many great cooks have a FINGERPRINT there, like whorls on top of the finger, but down in that cleft. They are master chefs.

TWO SPOTS- One is at bottom of hand on left, tied to birth and mother lines, so a scandal or dark sad and even shocking fate related to her and her husband. The other spot is up near heart line a late life romance that is shocking, which spots indicate. Looking at his horoscope, I'd say with VENUS in first degree of MOONCHILD, he wants a more feminine, motherly and submissive and truly home-loving woman. The next great love, well after the heyday of his career, will be the mother of his best and most interesting children.

You cannot imagine how many things one sees that one cannot tell a client. Sometimes you really gotta bite your lip and NOT say it.

ANITA SANDS READS PALMS by SCAN, XEROX or in PERSON and teaches palmistry, 25$ the hour in Los Angeles. astrology@earthlink net is her email.


<====LEARN TO READ CHARACTER AND DESTINY AT THE ASTRO INDEX.

<===  BACK TO THE NEW AGE, MYSTICAL STUDIES PAGE