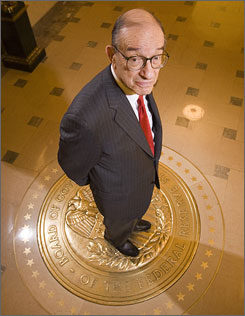 
by Anita Sands Hernandez, posted at the Truths that Gov Hides ARCHIVE http://www.masterjules.net/index2.htm

Mainstream Headlines are garnered by International Banking Conferences, but what's in the pages of your local newspaper? A list of the speakers, some generalities but rarely does the TIMES feature the NITTY GRITTY that was SPOKEN THERE! What a knowledgeable speaker admits in the FOOTNOTES at the bottom of his speech is important and doesn't get told in public. Too bad for us, as ALAN GREENSPAN during his tenure as head of the PLANET's TREASURY regularly tucked the truth into his prounouncements, truths that even went against his official policy. (Note: Al is a PISCES, most shy sign ever, so nobody knew he was a whistleblower, one whose official utterances should have been examined with a microscope cuz every so often, you'd find these shining diamond beads of truth hidden in the mud.

If you google the phrase "greenspan admitted" you will find 8,400 entries. Here are a few of the truths the lie-meister admitted!

1.) In a congressional hearing on October 23, 2008 Greenspan admitted that his free-market ideology shunning certain regulations (ahem!) was flawed. (i.e. CHICAGO BOYS, FRIEDMAN, KEYNES were all greedy bozos and truant liars.) This caused backlash from Objectivist (AYN RAND GREED IS GOOD) intellectuals, blaming the economic crisis on Greenspan's pandering to the mixed economy and betraying his ostensible laissez-faire views. (GREENSPAN is like a chocolate egg. All rainbow, traditional colored frosting on the outside for show, but the good creamy stuff is absolutely hidden from sight.)

2) In the wake of the subprime mortgage and credit crisis in 2007, Greenspan admitted that there was a bubble in the US housing market, warning in 2007 of "large double digit declines" in home values "larger than most people expect." However, Greenspan also noted, "I really didn't get it until very late in 2005 and 2006." Still, Al, that's 3 years before WE DID!

3) Greenspan admitted that the housing bubble was “fundamentally engendered by the decline in real long-term interest rates”,[48] though he also claims that long-term interest rates are beyond the control of central banks because "the market value of global long-term securities is approaching $100 trillion" and thus these and other asset markets are large enough that they "now swamp the resources of central banks."

4) Greenspan admitted fault in opposing regulation of derivatives and acknowledged that financial institutions didn't protect shareholders and investments as well as he expected. (During testimony, Rep. John Yarmuth (D-KY) compared Greenspan to Bill Buckner, the Boston Red Sox first baseman whose fielding error caused the team's loss in the 1986 World Series. These four are contained in his online bio! http://en.wikipedia.org/wiki/Alan_Greenspan

His BIG ADMISSION was to BRIT BANKERS. http://www.guardian.co.uk/commentisfree/cifamerica/2008/oct/24/alan-greenspan-economy-crisis

He fessed up BIGTIME that all the American banks knew the derivatives they were selling to Brit investment consortiums were valueless! Bubbles and no substance. Alan was promptly fired. That story is hard to find online. I once saw it and didn't save it.

But what he'd told Congress was:  " I made a mistake in presuming that the self-interests of organizations, specifically banks and others, were such as that they were best capable of protecting their own shareholders and their equity in the firms," Mr. Greenspan said. "My mistake was fundamental."

"You found that your view of the world, your ideology was not right, it was not working?" said California congressman Henry A Waxman, the committee chairman. (meaning KEYNSIAN TRICKLE DOWN ECONOMICS, FREE TRADE, TRANSNATIONALS RUN THE WORLD)

"Absolutely, precisely," Greenspan said. "You know, that's precisely the reason I was shocked, because I have been going for 40 years or more with very considerable evidence that it was working exceptionally well."

To hear Alan Greenspan admit that his way of seeing the world was "absolutely, precisely" wrong is to mark the end of an era. There was a time when Greenspan conferred his blessing on the proliferation of derivatives. He opposed regulating derivatives because they spread the risk and made cheap credit more widely available.

The trouble is that the prices of this cheap credit began to lose any connection to reality as derivatives proliferated. As mortgages - which themselves were based on a real estate bubble - were dismembered and repackaged, the resulting derivatives became detached from the value of the underlying assets. Collateralised Debt Obligations, or CDOs, were given triple-A credit ratings and traded by bankers who never saw the properties or looked at the credit profiles of the borrowers. The risk may have been spread, but the price of the risk was badly underestimated.

Two weeks ago, Nell Minow of the Corporate Library proposed the Paul Volcker rule (named after the former Federal Reserve chairman) in an appearance before the same House committee: "If Paul Volcker can't understand it, it shouldn't be on the market."

Greenspan admitted TO CONGRESS that his opposition to regulation on derivatives, going as far back as 1994, was part of the problem. The Fed’s slashing of interest rates from 2001 - 2004 helped to create a housing bubble, and Greenspan brushed aside concerns of the market bursting because housing prices never experienced a national decline. Greenspan told the Committee that credit default swaps, an unregulated “insurance policy” on derivatives, needed to be reigned in as well. ( http://www.therightperspective.org/?p=216 )

Greenspan admitted that he and some other really smart folks didn't understand the derivatives market that they had allowed to flourish, despite the "best insights of mathematicians and finance experts," sophisticated computer modeling and at least one Nobel prize in economics:

The whole intellectual edifice, however, collapsed in the summer of 2008  because the data inputted into the risk management models generally covered only the past two decades, a period of euphoria.

We have seen it over and over again in the Age of Greenspan: hedge funds got their name by hedging risks, but derivatives can be used to double down on risk just as easily. New financial instruments were declared to be so diabolically clever that they couldn't possibly fail. Sophisticated equations allowed bankers and hedge fund managers to price risk to within an inch of their lives, or so they thought; they were actually living far beyond any rational capital requirements.

When Long-Term Capital Management, which hired some of those Nobel laureates, failed 10 years ago, Greenspan had to orchestrate a rescue using investment bank funds. LTCM was wound up, but its techniques spread quickly through Wall Street. Investment banks, which before the Age of Greenspan made money by managing money for clients, began trading for their own account. Managers were rewarded for taking on ever larger and more exotic risks that bore little resemblance to the underlying economic reality.

One doesn't need a Nobel prize to know what brought about the collapse of this intellectual edifice. Humorist Roy Blount summed it up in a talk before an audience in Philadelphia earlier this week: "Money got too abstract, and that's why it went away".

Wealth DAILY doesn't let Greenspan get away with that 'jee, ya could have fooled me act. They say 2-26-09,  Wall Street executives. Government ideologues and lawmakers. Pay no attention to their double speak.

It's just "theater" designed to distract you from the truth... which is that they're all slimy, soulless liars...From Merrill Lynch's John Thain to former Fed Chairman Alan Greenspan, we now know the 'fix' was in... Wall Street's worst culprits in collusion with the miscreants of a hapless, deregulated government. But Thain and Greenspan aren't the only robber barons behind this historic heist. They're all host bodies carrying the same malignant cancer that's spread through Wall Street and the government's Corporate Welfare Program for the last decade-plus: GREED.

You can learn all about John Thain and Alan Greenspan--and the other 8 "culprits of the financial crisis"--in our just-published report: The Architects of Destruction. (No Registering required, you just give'em your email they mail you the report!)  SO HERE IS THE REPORT THEY SENT ME, an URL which makes it even easier to share, no retyping! http://www.wealthdaily.com/report/the-architects-of-destruction/391

MAKING WEALTH DAILY my HOT JOURNAL TIP for the  DAY! Read'em, save their stuff to cache, share it, all their very comprehensive reports. They understand how to run an ONLINE NEWSPAPER! I HATE registering even for free samples where later they charge your VISA, right?

<=== BACK TO SURVIVE THE FUTURE WEBPAGE