MEDITATIONS ON THE MELTDOWN 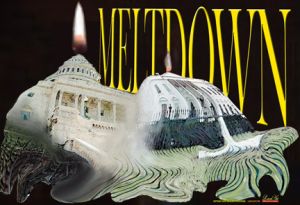 Thoughts on the financial melt down: More money will go down the drain now than in 1929 by a factor of a million. Not to worry. No money disappears. It ends up in somebody's sock and there will be a paper trail and it can be retrieved by the posse.

The bankrupt corps have identified their owners as 'of the stealing stripe'. The foxes in GOVERNMENT who went into the henhouse to rescue these stupid foxes, stranded with poultry in their mouths will float the foxes ample loans. But guess what? By doing so, they also identify themselves!

Those two foxy groups who somehow sit on OUR public CHICKEN HOUSE dripping blood and moola will lead us to the pirate booty. Their poker winnings will make a neat little treasure for any THIRD POLITICAL PARTY that had enough cagy, smart pure, valiant warriors to break up this good ole boys poker game, send them off to jail and then create strategy meetings, think tanks, led by smarties with MBA's who can sort things out. Cherchez le MOOLA.  FIND THE MONEY. Chase the paper trails. Nationalize and PROSECUTE.

In the old time ---the days of horrors, the ringleaders justified their actions. 'We were only following orders.' This time they won't be able to say that. Be certain that evil mutates, and absolute Evil mutates super shrewdly. New excuses and lies will be devised, but we aren't in a hypnotic trance. We can follow the money trail, nationalize the money and take care of everyone with that money create jobs, create microlending. We put MBA CEO's in to run things at 20k per annum salaries. They will lift up the old defunct, flunked CORPS and bring a few back from Guatemala and thusly run a brave new world..

But old antipathies must be discarded. We need to consolidate a true People's Rainbow Coalition. We gotta honor the Latino ethnics who scrape around doing work no one else wants to and pay rent on time. We gotta honor the blacks as there is no nicer race. And they got rhythm, too. Link them to the Yuppies who have paid up mortgages and the younger yuppies who are natural liberals but went bankrupt first time out on those tricky, variable-rate loans. Salt the stew with the NRA Liberterians who hate Jews, blame Israel and love to call FDR's socialist policies outright COMMUNISM but who thank God, are insulted at the treason of oligarchs and bankers just like the rest of us.

Let's call a spade a spade. If the GOV bails out its cronies the bankers, that's communism! Debatable whether it's 'good communism,' too. They aren't bailing US out. They're just bailing out the CASH COW airlines, banks, corporations and in a few weeks when the recession sinks down to all businesses, it'll be GM needs bailing and the line of CEOs with hands out and tin cups who themselves have Swiss bank accounts will be endless.

FDR would have sorted it out before things got to that stage. He brought us some good healthy organizing and some funding, tight ship during a war, rescued the whole planet. He gave out soup,  jobs, invented social security and the Dole so that we don't have to take care of grammy and gramps ourselves or send them out onto the ice with the polar bears. The SOC SECUR state will care for them, give them a stipend, medicare, old age homes, the works. 'Course they take it out of Gramps by our not inheriting the family home which goes to pay off the old age home at the cost of 2k a day. But it's choice. You want granny, then you get the house.

New models of welfare can be cooked up,  there's a coalition to build to decide all that. Let's get the warriors, the liberals, the activists, the Liberterians, the Republicans, those  NRA types all together in a RAINBOW COALITION. I know it's risky cuz the GOP/ LIBERTERIANS are total genetic fascists but we will stand between them and any war. I know they'd love to invade MEXICO but we won't let them because there are more tree hugging, anti-war activists in this new people's gov than ever but we'll let them in the think tank and make a rule early, no war ever. Those are the perameters.

I found this online:
FREDDIE, FANNIE and FASCISM: WHERE WAS CONGRESS WHEN THE COUNTRY WENT DOWN THE DRAIN and CAN WE STILL INVEST IN WALL STREET, EVER AGAIN? OR WILL ANYONE?
http://www.marketwatch.com/news/story/story.aspx?guid=%7BD8EF4356-8451-4BEE-9DA4-55AE9E911C1E%7D


CAN WE STILL INVEST IN US STOCKS? DOW DROPS 500 points in one day! Another 500 in the next two days.

WASHINGTON (MarketWatch) -- President Bush said he is confident that Wall
Street can handle the dramatic investment banking shakeup over the last 24
hours which has seen the bankruptcy of Lehman Brothers and the sale of
Merrill Lynch. In a statement at the White House, Bush appealed for calm,
saying that policymakers were focused on financial market stability. While
short-term adjustments in financial markets would be painful, Bush said he
remained confident in the long-run health of financial markets.

We will know in the next three weeks if the USA can avoid complete bankruptcy and a
depression that will make 1929 look like a hiccup in global financial
markets. Adjustment, indeed - Today the Dow DROPPED OVER 500
POINTS, but I believe trading will be stopped before it gets worse. Thus, any cash
is better OUT of a bank than in any kind of a bank at least through the
first of the year. "

<==== BACK TO THE ECONOMIC FIX WEBPAGE