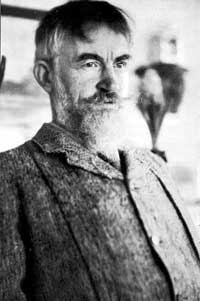 Irish dramatist, literary critic, a socialist spokesman, and a leading
figure in the 20th century theater. Shaw was a freethinker, defender of
women's rights, and advocate of equality of income. In 1925 he was
awarded the Nobel Prize for Literature. Shaw accepted the honor but
refused the money. (Nobel made his money manufacturing guns, dynamite.)

"Just as the historian can teach no real history until he has cured his
readers of the romantic delusion that the greatness of a queen consists
in her being a pretty woman and having her head cut off, so the
playwright of the first order can do nothing with his audience until he
has cured them of looking at the stage through the keyhole, and sniffing
round the theatre as prurient people sniff round the divorce court."
(from G.B. Shaw's preface in Three Plays by Brieux, 1911)

George Bernard Shaw was born in Dublin, where he grew up in something
close to genteel poverty. "I am a typical Irishman; my family came from
Yorkshire," Shaw once said. His father, George Carr Shaw, was in the
wholesale grain trade. Lucinda Elisabeth (Gurly) Shaw, his mother, was
the daughter of an impoverished landowner. She was 16-years younger than
her husband. George Carr was a drunkard - his example prompted his son
to become a teetotaller. When he died in 1885, his children and wife did
not attend his funeral. Young Shaw and his two sisters were brought up
mostly by servants. Shaw's mother eventually left the family home to
teach music, singing, in London. When she died in 1913, Shaw confessed
to Mrs. Patrick Campbell: "I must write to you about it, because there
is no one else who didn't hate her mother, and even who doesn't hate her
children." (??) UNCLEAR WHAT HE MEANS. 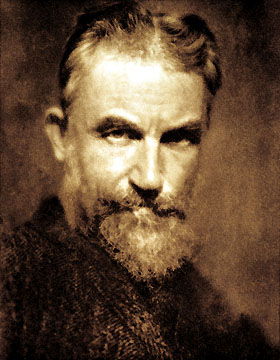 In 1866 the family moved to a better neighborhood. Shaw went to the
Wesleyan Connexional School, then moved to a private school near Dalkey,
and from there to Dublin's Central Model School. Shaw finished his
formal education at the Dublin English Scientific and Commercial Day
School. At the age of 15, he started to work as a junior clerk. In 1876
he went to London, joining his sister and mother. Shaw did not return to
Ireland for nearly thirty years.

Most of the next two years Shaw educated himself at the British Museum.
He began his literary career by writing music and drama criticism, and
novels, including the semi-autobiographical IMMATURITY, without much
success. A vegetarian, who eschewed alcohol and tobacco, Shaw joined in
1884 the Fabian Society, served on its executive committee from 1885 to
1911. The middle-class socialist group attracted also H.G. Wells - the
both writers send each other copies of their new books as they appeared.
"You are, now that Wilde is dead, the one living playwright in my
esteem," wrote Wells after receiving Shaw's THREE PLAYS FOR PURITANS
(1901).

A man of many causes, Shaw supported abolition of private property,
radical change in the voting system, campaigned for the simplification
of spelling, and the reform of the English alphabet. As a public
speaker, Shaw gained the status of one of the most sought-after orators
in England. In 1895 Shaw became a drama critic for the Saturday Review.
Articles written for the paper were later collected in OUR THEATRES IN
THE NINETIES (1932). Music, art, and drama criticism Shaw wrote for
Dramatic Review (1885-86), Our Corner (1885-86), The Pall Mall Gazette
(1885-88), The World (1886-94), and The Star (1888-90) as 'Corno bi
Basetto'. His music criticism were collected in SHAW'S MUSIC (1981).
After lacing a shoe too tightly, an operation was performed on his foot
for necrosis; Shaw was unable to put his foot on the ground for eighteen
months. During this period he wrote CAESAR AND CLEOPATRA (1901) and THE
PERFECT WAGNERITE (1898). "...I have no reason to believe that they
would have been a bit better if they had been written on two legs
instead of one," he said in a letter to the playwright St John Ervine.
His friend had his leg amputated during WWI after being hit by a shell
splinters.

In 1898 Shaw married the wealthy Charlotte Payne-Townshend. They
settled in 1906 in the Hertfordshire village of Ayot St. Lawrence. Shaw remained
with Charlotte until her death, although he was occasionally linked with
other women. 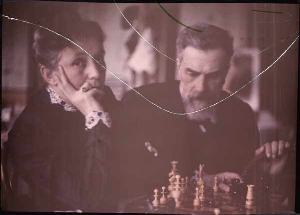 He carried on a passionate correspondence over the years
with Mrs. Patrick Campbell, a widow and actress, who got the starring
role in PYGMALION. All the other actresses refused to say the taboo word
'bloody' that the playwright had put in the mouth of Eliza. When she
wanted to publish his love letters to her, Shaw answered: "I will not,
dear Stella, at my time of life, play the horse to your Lady Godiva." 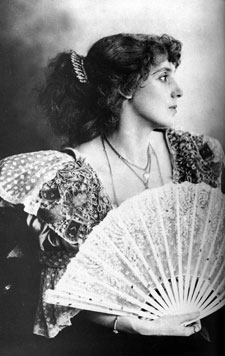 The Norwegian playwright Henrik Ibsen had a great influence on Shaw's
thinking. For a summer meeting of the Fabian Society in 1890, he wrote
THE QUINTESSENCE OF IBSENISM (1891), in which he considered Ibsen a
pioneer, "who declares that it is right to do something hitherto
regarded as infamous." Shaw's early plays, WIDOWER'S HOUSES (1892),
which criticized slum landlords, as well as several subsequent ones,
were not well received. His 'unpleasant plays', ideological attacks on
the evils of capitalism and explorations of moral and social problems,
were followed with more entertaining but as principled productions. "To
a professional critic (I have been one myself) theatre-going is the
curse of Adam. The play is the evil he is paid to endure in the sweat of
his brow; and the sooner it is over, the better." (from 'Preface' to
Saint Joan) . CANDIDA was a comedy about the wife of a clergyman, and
what happens when a weak, young poet wants to rescue her from her dull
family life. But it was not until JOHN BULL'S OTHER ISLAND (1904) that
Shaw gained in England a wider popularity with his own plays. In the
Unites States and Germany Shaw's name was already well-known. Between
1904 and 1907 The Royal Court Theatre staged several of his plays,
including Candida.

MORELL: Man can climb to the highest summits; but he cannot dwell there.
MARCHBACKS (springing up): It's false: there can he dwell for ever, and
there only. It's in the other moment that he can find no rest, no sense
of the silent glory of life. Where would you have spend my moments, if
not on the summits? MORELL: In the scullery, slicing onions and filling
lamps. (from Candida)

MAJOR BARBARA depicted an officer of the Salvation Army, who learns from
her father, a manufacturer of armaments, that money and power can be
better weapons against evil than love. Ironically the producer of the
film version of the play, Gabriel Pascal, was eager to do business with
Sir Basil Zaharoff, an arms dealer.

PICKERING: Have you no morals, man?
DOOLITTLE: Can't afford them, Governor.
(from Pygmalion)

Pygmalion was originally written for the actress Mrs. Patrick Campbell.
Later the play became the basis for two films and a musical. (Shaw's
correspondence with the actresses Ellen Terry and Stella Campbell are
available in book form.)

Shaw's popularity declined after his essay 'Common Sense About the War'
(1914), which was considered unpatriotic.

With SAINT JOAN (1924), his masterpiece, Shaw was again accepted by the
post-war public. Now he was regarded as 'a second Shakespeare', who had
revolutionized the British theatre. Shaw did not portrait Joan of Arc,
his protagonist, as a heroine or martyr, but as a stubborn young woman.
And as in classic tragedies, her flaw is fatal and brings about her
downfall. Uncommonly Shaw showed some sympathy to her judges. The play
was written four years after Joan was declared a saint.

In 1893 Shaw collaborated with Keir Hardie in writing the party program
for the new Independent Labour party. Many of his playes also were
philosophical addresses on the subject of individual responsibility or
freedom of spirit against the conformist demands of society. Shaw was
cofounder with the Webbs of the London School of Economics, and launched
the petition against the imprisonment of Oscar Wilde. In 1897 he entered
local government.

In his plays Shaw combined contemporary moral problems with ironic tone
and paradoxes, "Shavian" wit, which have produced such phrases as "He
who can, does. He who cannot, teaches", "England and America are two
countries divided by a common language", "Christianity might be a good
thing if anyone ever tried it", and "I never resist temptation because I
have found that things are bad for me do not tempt me." Discussion and
intellectual acrobatics are the basis of his drama, and before the
emergence of the sound film, his plays were nearly impossible to adapt
into screen. During his long career, Shaw wrote over 50 plays. He
continued to write them even in his 90s. George Bernard Shaw died at
Ayot St. Lawrence, Hertfordshire, on November 2, 1950. He was cremated
and it was his wish that his ashes be mixed with those of his wife,
Charlotte - she had died seven years before, "an old woman bowed and
crippled, furrowed and wrinkled," as Shaw depicted her in a letter to
H.G. Wells.

Since the days of the silent films, Shaw had been a fan of
motion-picture. He also played in the film Rosy Rapture - The Pride of
the Beauty (1914). Shaw did not like much of the German film version of
Pygmalion (1935), and the penniless producer and director Gabriel Pascal
persuaded the author to give him the rights to make films from his
plays. "Mr Pascal, you're the first honest film producer I have ever
met," Shaw told him at their first meeting and gave him a pound note.
Pygmalion, produced by Pascal and directed by Anthony Asquith and David
Lean (uncredited), was a great success. In one article, Pascal was
picked with the Pope and Hitler as one of the ten most famous men of
1938, but his career ended in the financial fiasco of the spectacle
Caesar and Cleopatra (1945). Among several other films inspired by
Shaw's plays are Saint Joan (1927), How He Lied to Her Husband (1931),
Arms and the Man (1932), Major Barbara (1941), and My Fair Lady (1964).
Pascal's co-director in Major Barbara was David Lean, but for thousand
pounds Lean agreed to give the full credit to Pascal.

IMPRISONMENT, 1925 THE SOCIALISM OF SHAW,
1926 THE INTELLIGENT WOMAN'S GUIDE TO SOCIALISM AND CAPITALISM,

Read some of the scintillating, delightful text from the "INTELLIGENT WOMAN'S GUIDE TO SOCIALISM"
fabulous witty book. A lifelong prosletyzer for liberal, progressive economic methods proposed by socialists in UK.
Who explains the philosophy beautifully here. If he were alive today he'd say 'have GOV take over the banksters' banks, run them ...not give those thieves any more money. STOP all agricultural subsidies. NO more cash giveaways to friends of the politicos, which subsidizing is. Let everyone trade freely with every nation, no more colonial despots owning slave countries.He says that the reason Germany went bezerk, the MAIN THIRD WORLD near them at turn of century was AFRICA. France and ENGLAND cut up that pie. They could sell products there, and take resources from it. Germany could not.  GBS took back a lot of his praise and friendship for Germany after the Concentration camps were torn down. though.  He wasn't dumb or stubborn!

<===BACK TO THE WRITERS' INDEX PAGE