FREDERICK FORSYTH, The GREATEST WRITER OF SPY THRILLERS EVER! 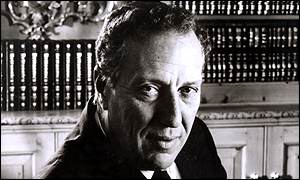 WHEN READING FOR PLEASURE, I OPT FOR POLITICAL SCI-FI THRILLER.LIFE always catches up with  MUCH OF THE STUFF that the Political Journalist or Spy Thriller Author writes about. Orwell's novel, 1984, predicted what life in the future might be like. Good guess, for an author in 1948 and he hadn't even seen the McCarthy hearings yet. BRAZIL is a prophetic picture.  The novel STEPFATHER BANK hasn't been filmed yet, but what a wonderful book, by Dave Poyer prophecying a world where one bank owns everything and everyone, written in the mid 70's.

My fave POLITICAL novelist of all time used to be FREDERIC FORSYTH (until I discovered Daniel Silva,  who writes about WWII, THE JEWS vs. POPE/ SWISS anality, the MUSLIMS vs. MOSSAD, and the  GERMANS. His later books are about MOSSAD/ISRAEL vs ARABS/ MUSLIMS.) I hold Silva in as much esteem as Forsyth who is an entertaining, thrilling yet astute, connected, meaningful author.

What got me started in political thrillers was his "THE ODESSA FILE". (Caveat. The film with Max Schell and Jon Voight didn't live up to BOOK. Adapter changed the best best part, Gawdknows why! Odd, too. The book is perfection. It ain't broke don't fix it! You will read its last few chaps TURNING PAGES AND SCREAMING impatiently EEEK EEK! I did. Grisham's The FIRM had stuff changed that I don't think was as good as the original, also.)

Day of the Jackyl was perfection on wheels. The film was cut for cut the book. So a great film. Another more recent Forsyth title "ICON nailed me to a chair for 24 hrs, taking time out only to eat, cook for/feed 20 cats & watch latest Bravo episode of the WESTWING REAL ORIGINAL TV SERIES,  premier cru AARON SORKIN  which was daily at on Bravo.

FORSYTH's  fab "ICON" was published in  97, it is written about a Moscow of l999. You'd think --who cares, right? Russia can go to its damn doom but the heroes care. They are the retired master spy of Brit Intel, Alec Guinness type guy, and not retired ..instead blasted out of masterful multilingual service as a spy enroller HERO, a kind of REDFORD with chops.

He lost his career just as Angleton lay dying saying 'there is a mole in LANGLEY damnit!' Indeed there was, and the mole was ALDRICH AMES.  A lot of this detail on these matters will be found in this book. The rest is action. Only reason this didn't get made into a flick is  he scene where Russian Army taking back the KREMLIN from the Ruski HITLER wannabe who's done a coup and grabbed it would be COSTLY to shoot.

The game ---the chess game, played by two heroes is LeCarre-style, played by these two Western spooks, underfunded, their own gov/handlers not really interested in preventing the HITLER WANNABE even if three people died in fabulously interesting circumstances causing the BLACK MANIFESTO he'd written for his confreres to get to the Brit Embvassy in Moscow. Real real convincing arch villain, I can see Franco Nero playing him, (villain in BRUCE WILLIS  DIE HARD II) someone very tall, gorgeous, cool and dead. Needs to be very dead as he's a real killer of an intellectual to whom so many are odious, extraneous.

You are gonna have a good pair of days with this one! Thank me by giving me some titles of great authors. Here is a list of FREDERIC FORSYTH  FAB BOOKS! Not a cent of boredom in any one of them! HIS BIOGRAPHY and a LIST that is more legible.

Frederic Forsyth's TAKE on the WAR WITH IRAQ.