THE FIFTIES WERE AMERICA's ECONOMIC, Cultural AND SPIRITUAL APOGEE!*
by anita sands hernandez 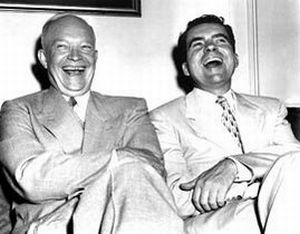 WHY ARE THESE MEN LAUGHING? Because AMERICA WAS PEAKING!
IT WASN'T GOING TO GET ANY BETTER than this! THE JOKE IS ON YOU!

*APOGEE: "A final climactic stage; "their achievements stand as a culmination of centuries of development"

No matter how people pan the 50's, I'll bet Ike and Nixon are laughing in heaven. They had it right. Ike remembers when Music was GLORIOUS -- The four Freshmen, the Ames Brothers. How much is that Doggie in the Window. and Tennessee Waltz?  It wasn't a square time. Miles and Monk were jamming. It was not a square time at all. Hugh Hefner came on the scene and Elvis followed. What was square about them?

The dollar was the World Heavyweight;  the Euro didn't exist. There were Francs and Pounds and Shillings like a sensible world should have and the dollar kicked all their butts. A white collar salary allowed an entire family to go to EUROPE for summer vacation, stay in famous hotels, shed some trickledown in Europe with shopping and tourism. The furriners appreciated us over there. You could buy leather goods in Spain or Italy that were actually cheaper by half than the USA and twice as stylish!

American Salaries were the bomb. A man could work any blue collar job, be knee deep in gravy and afford to buy a 3 bdrm. home with 8000 square feet of yard.  His wife could stay home and raise the little baby boomers and boomerettes to be sensible, wise, mentally healthy. Dad brought home the bacon and he was respected. Nobody gave him any lip. Not even mom.  Delinquency didn't exist. Serial murderers hadn't been invented, A Columbine was beyond imagining. The American left had just gone through two decades of its golden years and Washington realized half the intelligent world was RED, most of them in America and had the Mc Carthy hearings to keep them in their place, but it was a healthy, pitched battle and the left shrugged and left the limelight, went underground until the sixties, no big deal. America was too prosperous for a left anyway. (NOW we need a left!) All those Grapes of Wraths burnt out farmers were earning well in California, nobody was hungry. Beef was 25c an lb. Gold was 33$ an oz. Women didn't have jobs but they had gold jewelry. Men could drive their wives around in big shiny Buicks and Caddies, everybody sparkling. You could fill your gastank for 18c a gallon to 25c a gallon at end of the 50's. Families ate out in those days. Nobody thought anything. Budget was a word for parakeets which everybody had.

Check out what other noble cultural happenings characterised this time. http://en.wikipedia.org/wiki/1950s Those were the original HAPPY DAYS. And people did all that on meat and potatoes and sugary breakfast cereals.
Along came the 60's, dope, free love, anti-war demonstrations, birth control, woman's lib, meditation, yoga, holistic healthfoods, granola, tofu and green salad and it's been downhill ever since. Look at what happened. The dollar slumped. Wall Street ran away with the country.  And we were so distracted by the 60's, 70's and 80's that we let 'em!

Cmon take a second and read up on the 50's and let's show a little RESPECT for Protestant Work Ethic, and for Küche, Kirche Kinder,  which is how things have been for a million years. If it works, as Darwin says, don't discard it for some new fangled genetic backwash that you embrace out of sheer perversity. What's wrong with Dad and the American flag and the 8 cylinder car? HMMM?

THE JOKE IS ON US. WE EVOLVED a NOTCH TOO FAR. Into a backwash, Too laid back for our own good. We got fat and trusting. WE started to assume that just because The Wall Street crowd was posh and lucky, they knew something we didn't. We forgot to respect the 50's center ground.

In those days the economy had the smooth ride of a big Chrysler. Interest rates were low, unemployment stats in the near zero area, no inflation. Real wages and productivity were on the upswing. The economy boomed after WWII and the 50's and 60's had the best peace time growth of GDP per capita of the century. There were 2 mild recessions. If you want data it is available at http://www.economagic.com/popular.htm.  Read : http://www.thepeoplehistory.com/1950s.html

Example of the types of cars available and prices in the 50's
Cadillac Convertible 1959 Tailfins the ultimate car with tailfins produced by Cadillac with the chrome to go with it and a 325 Horsepower engine and power anything and everything Prices From $5,400

1958 Nash Metropolitan The Metropolitan foreign small car with sports car flavor
Prices From $1,626 but it looked like a refrigerator on wheels.

* The 50's were the time when the shape of the political landscape in the world could be clearly defined between the Soviet dominated East and the capitalist West.

* The cold war became a grim reality because both sides had the power and technology for a Nuclear holocaust, but equally both knew any war could not truly be won.

* Following the end of the second world war the economies of the western world boomed which led to the start of a consumer-led economy that seemed to have no bounds .

* With the forming of the EEC European Economic Community, West Germany enjoyed a growth which exceeded any expectations at the end of the war.

* Following on to the break up of the British Empire which before had occupied 30% of the globe many fledgling democracies were starting to find their own identities including India Pakistan Rhodesia now (Zimbabwe), and having the growing pains that any new democracy would face .

* During the 50's and following decades more and more of the old colonial empires would be forced to allow allow countries their independence.

* Following the creation of the new State of Israel there were many conflicts in the middle east which are still occurring to this day. The Suez Crisis in 1956 begins on July 26th as the supply of oil is blocked through the Suez Canal

* Like Germany in Europe Japan saw massive economic growth by supplying the goods needed for the consumer-led society in both Europe and the United States.

<=== BACK TO THE WALL STREET MELTDOWN AND WHAT CAUSED IT WEBPAGE