Caitlin Lyons labors in the towering stacks as bibliophiles trickle into Boston's Brattle Book Shop. Many are repeat customers, here to browse an eclectic collection -- hundreds of thousands of loosely categorized tomes that spill from these two floors onto outdoor shelves in an empty lot. It's an avalanche of paper, concedes Ms. Lyons, a recent English major with an ecosensitive streak. She acknowledges that this vast inventory, digitized, could shrink dramatically into an easily managed series of reads on a PC, PDA, or some dedicated device's screen. That, she says, would represent a loss. "Way too many things are becoming technological," she says, cradling a fragile-looking hardback copy of Benjamin Disraeli's "Sybil." "A bookshelf and a study? You can't do that on a disc."

Digital evolution has long since swept the audio and 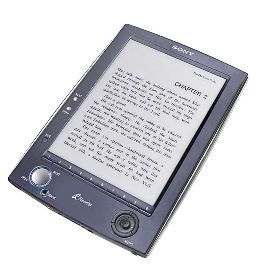 video realms, leaving holdout purists clinging to tubes, vinyl, and film. Holding back the broad digitization of books -- besides the special sensory experience they deliver in their traditional form -- has been a spotty digital inventory and the lack of a dominant device for displaying them.

But as habits change and content inventory nears critical mass (Google, to name one prospective repository, is still wrangling with copyright issues), digital books might finally gain a foothold, observers say -- not as a replacement format, but as an alternative delivery system not unlike the audiobook. Both the publishing industry and the reading public appear to be shaking the notion that for the beloved book, digital equals death.

"Around 2000, I think [publishers] thought there was going to be a brave new world and they were going to have a whole new thing, and I think that's part of what went wrong," says Sara Nelson, editor in chief of Publishers Weekly. What's clearer now, she says, is "there will be plenty of niches and plenty of space for books in digital
form, not so much as a direct competitor, [but] as an added format."

In fact, digital loomed very large in the book-publishing world back at the beginning of this decade. No less than Bill Gates was referring to paper as a "reading 'technology'" nearing obsolescence. Massachusetts Institute of Technology's Media Lab was dabbling in "electronic ink." Booths at BookExpo America were crammed with devices from firms of all sizes. Partnerships bubbled.

"There was an enormous outpouring of messianism," says Richard Curtis, president of his eponymous literary agency and founder and president of E-Reads, a publisher of both  print and electronic books. "In the next five years there was a backlash as the people involved realized that it was far more complicated than they thought --
technically, in terms of digital-rights management, and culturally." Even big firms such as Warner, with its ipublish, were left with little to show for their investments.

Today, more quietly and with adjusted expectations, the push for digital books has been renewed. Sony is tweaking its 10-month-old Portable Reader tablet. Giant book e-tailer Amazon is plotting its own move into digital sales, with a prototype product in testing. Year-over-year growth at fictionwise.com, a leading digital-books retailer, moved from a fairly flat 20 percent in 2005 to a projected 28 percent this year,
according to Steve Pendergrast, a spokesman. His firm markets its own reader: the eBookwise 1150.

"Sony's marketing grows the entire e-book market and gets people thinking about buying a device," Mr. Pendergrast says. "They shop around, and some percentage of them opt for ours instead of theirs."

Nearly half of his firm's e-book sales are now in romance titles, Pendergrast says, a category that was in low single digits as recently as 2004. Other areas likely to be well served, Ms. Nelson and others say: books with perishable information that are candidates for one-time use -- travel books, for example. The advantages are clear.

"There's portability, flexibility," says Mr. Curtis, who allows that he
still likes an old-fashioned book before bed. "Can't read the 10-point type [of an
e-book]? Bump it up to 12 points. Load 40 books into a device and carry it to Frankfurt or
wherever." Still missing, says Curtis, is that "explosive spark" device that will appeal
to a fast-fingered generation.

It might involve Apple. Last month, HarperCollins announced a pilot
project in which samples of more than a dozen fiction titles could be accessed by users of
the iPhone. The publisher said the move would gauge demand for a cellphone format. There
are other pockets of promise. E Ink, in Cambridge, Mass., for example, has made
recent strides in flexible plastic display screens.

Curtis's small, independent firm has persevered since 1998, he says, kept
in the game through sales of print books. "Now the [e-book] industry seems to be
established on enough of a basis for us to go on," he says. "We're moving forward
aggressively."

You read  many daily newspapers & books on it, get your fave blog, updates
come on it,...you can take it anywhere. You can read many books, it keeps
track of where you were. so you can switch books. If you're a voracious
reader.

E PUBLISHING is here today. They sold out on kindles today when the KINDLE
CAME OUT, and NEWSWEEK came out.

You can drop it and it won't break. You can carry your whole library with
you as it holds 200 books. WATCH BEZOS ON YOU TUBE but do + KINDLE


Can an indie publisher like you do it with the KINDLE?
can YOU publish a book and have people want to read it on KINDLE?
See, it's just like a PC except it is held in your lap like a book.
http://www.techcrunch.com/2007/11/19/qa-with-bezos-about-the-kindle/

It can do customer reviews like AMAZON does.... but one thing it can't do
is give you a signed first edition.

http://www.techcrunch.com/2007/11/19/liveblogging-the-amazon-kindle-e-reader-show-with-jeff-bezos/
(has great photo of the KINDLE)

THE ACTIVIST should utilize the internet and become  a POSTER which is what ANITA SANDS HERNANDEZ, Los Angeles  Progressive, Mother of 4 and career Astrologer does. She researches edgy, 'telling' articles, posts them and POSTS them at her website then sends the URL out to her TWITTER friends, her FACEBOOK readers and to her  EMAIL lists, --to people who she's noted are thinkers, do-ers and are likely to pass the information on.  The themes? HOLISTIC HEALING without doctors, but also for CATS AND DOGS  ,RAISING HOLISTIC BABIES,   TRUTHS the GOV WILL HIDE & NEVER TELL YOU,  The  FUTURE, WHAT'S COMIN' AT YA! FRUGAL LIFE STYLE TIPS,  and ALL the things you'll need to do to SURVIVE the COMING GREAT DEPRESSION,  Also cottage industries galore, like ARTISANRY FOR EXPORT, EARN EUROS... (and more.. see the dozen themes below) Anita is at astrology@earthlink.net ). Get a 35$ natal horoscope "my money/future life" reading now + copy horoscope as a Gif file graphic! No smarter, more accurate DESTINY/ career AND LOVE reading out there!

<==== BACK TO THE SHOW BUSINESS ARCHIVE,  "HOLLYWOOD-BOUND SEMINAR"

<====HOW TO TINKER WITH OTHER PEOPLE's BRAINS for $ (TANTRUM YOGA, NO LICENSE REQ'D)

<===== BACK TO THE PHILOSOPHIC/ POLITICAL DIFFERENCES  INTERPRETED

<=== BACK TO "HOW TO MARRY A BILLIONAIRE" A 120 CLASSROOM SEMINAR for THE SUPER BEAUTY. How to GIVE UP JOCKS, HOTTIES & SAVE THE WORLD