French Intelligence had seen dope funding guns in their colonial outpost, Indochina. The very needs of spies, to have street operatives, snitches, went hand in hand with drugs. Info, Smack. Guns. Funding on the sly. Street assassins or hit men also went with it. Mob, gangsters, street dealers, Death squads and their salaries. These were all linked. Our  OSS /CIA learned quickly. Soon America had a dope trade to fund CIA shennanighans with money Congress couldn't see.

According to Alfred W. McCoy in The Politics of Heroin in Southeast Asia, CIA arms, money, and disinformation enabled Corsican criminal syndicates in Marseilles to wrestle control of labor unions from the Communist Party. The Corsicans gained political influence and control over the docks -- ideal conditions for cementing a long-term CIA partnership with mafia drug distributors, which turned Marseilles into the postwar heroin capital of the Western world. Marseilles' first heroin laboratories were opened in 1951, only months after the Corsicans took over the waterfront. The Film FRENCH CONNECTION with Gene Hackman refers to NYC COPS breaking them in two so CIA could have the franchise, move it from Marseilles to SAIGON, have the American 'mob' colluding with Oliver North, Richard Secord, Nugan Hand bank to make some serious CIA MOOLA for dirty tricks. Reporter Gary Webb would stumble on the OCTUPUS, report it and get murdered.

The CIA (OSS, then) had sprung Lucky Luciano from prison during WWII ostensibly to secure his aid in squelching dock strikes in NY, contemporaneous with America's NEED to control Mussolini's ITALY (big Nazi ally) The Mob controlled those East Coast Harbor unions. Lucky was to go free, but must stay in Italy where he would help the OSS, as it was then called, --- to get Italy back from the Nazis. The Agency had already embraced drug dealing (heroin to blacks in ghetto,) when they had organized the FLYING TIGERS to go into CHINA, fight along side Chaing Kai Shek to fight off the Communists and fund their dirty exploits with poppy so CONGRESS could not KNOW HOW THEY GOT THE MONEY. That was in the late 30's. They found CHAING KAI SHEK's men funded their entire operation with heroin & OPIUM sales. (When Mao won in 49 he executed dealers).

EARLY 1950s, SOUTHEAST ASIA
The Nationalist Chinese army, organized by the CIA to wage war against Communist China, became the opium barons of The Golden Triangle (parts of Burma, Thailand and Laos), the world's largest source of opium and heroin. Air America, the ClA's principal airline proprietary, flew the drugs all over Southeast Asia. (See Christopher Robbins, "Air America", Avon Books, 1985, chapter 9  and do see AIR AMERICA film with MEL GIBSON, Robert Downey. SUPERB FILM. Military Intelligence packed China White into dead G.I's guts, shipped them home. French addicts used to do the work, I knew one, handsome Parisian in L.A. for a while (Anita Sands Hernandez writes,i.e. this poster.) Back in the USA AIRFIELDS the  bodies were opened, emptied, reclosed, dressed and got military funerals, the CIA guys went at midnight to get the bags of heroin. 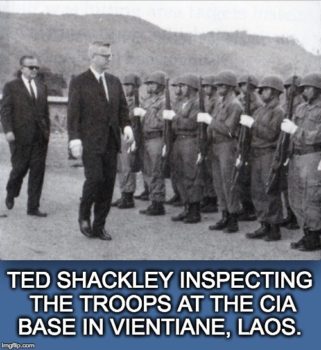 During U.S. military involvement in Laos and other parts of Indochina, Air America flew opium and heroin throughout the area. Many Gl's in Vietnam became addicts. A laboratory built at CIA headquarters in northern Laos was used to refine heroin. After a decade of American military intervention, Southeast Asia had become the source of 70 percent of the world's illicit opium and the major supplier of raw materials for America's booming heroin market. NYC cops closed down the CORSICAN MOB, the COMPETITION (French Connection) out of MARSEILLES, France. (HACKMAN FILM )and CIA TOOK OVER THE SMACK TRACK from LAOS with the HMONG natives. My pal JEAN FRANCOIS a gorgeous Frenchman stuffed GI's bodies with HEROIN at the AIR BASE in NAM, they were unpacked back at US AIR FORCE BASES before handing over the BOOTY BODY to MOM AND DAD.

1973-80, AUSTRALIA
The Nugan Hand Bank of Sydney was a CIA bank in all but name. Among its officers were a network of US generals, admirals and CIA men, including TED SHACKLEY SUPER SPOOK & former CIA Director William Colby, who was also one of its lawyers. The CIA finally threw him out of a canoe. Body surfaced a few days later. This gang had
branches in Saudi Arabia, Europe, Southeast Asia, South America and the U.S., Nugan Hand Bank financed drug trafficking, money laundering and international arms dealings. In 1980, amidst several mysterious deaths of its CEOs/CFOS, the bank collapsed, $50 million in debt. (See Jonathan Kwitny, The Crimes of Patriots: A True Tale of Dope, Dirty Money and the CIA, W.W. Norton & Co., 1 987.)

1970s and 1980s, PANAMA
For more than a decade, Panamanian strongman Manuel Noriega was a highly
paid CIA asset and collaborator, despite knowledge by U.S. drug authorities
as early as 1971 that the general was heavily involved in drug trafficking
and money laundering. Noriega facilitated ''guns-for-drugs" flights for the
contras, providing protection and pilots, as well as safe havens for drug
cartel otficials, and discreet banking facilities. U.S. officials, including
then-ClA Director William Webster and several DEA officers, sent Noriega
letters of praise for efforts to thwart drug trafficking (albeit only against
competitors of his Medellin Cartel patrons). The U.S. government only turned
against Noriega, invading Panama in December 1989 and kidnapping the general
once they discovered he was providing intelligence and services to the Cubans
and Sandinistas. Ironically drug trafficking through Panama increased after
the US invasion. (John Dinges, Our Man in Panama, Random House, 1991;
National Security Archive Documentation Packet The Contras, Cocaine, and
Covert Operations.)

1980s, CENTRAL AMERICA
The San Jose Mercury News series documents just one thread of the
interwoven operations linking the CIA, the contras and the cocaine cartels.
Obsessed with overthrowing the leftist Sandinista government in Nicaragua,
Reagan administration officials tolerated drug trafficking as long as the
traffickers gave support to the contras. In 1989, the Senate Subcommittee on
Terrorism, Narcotics, and International Operations (the Kerry committee)
concluded a three-year investigation by stating: "There was substantial
evidence of drug smuggling through the war zones on the part of individual
Contras, Contra suppliers, Contra pilots mercenaries who worked with the
Contras, and Contra supporters throughout the region.... U.S. officials
involved in Central America failed to address the drug issue for fear of
jeopardizing the war efforts against Nicaragua.... In each case, one or
another agency of the U.S. government had information regarding the
involvement either while it was occurring, or immediately thereafter....
Senior U S policy makers were not immune to the idea that drug money was a
perfect solution to the Contras' funding problems." (Drugs, Law Enforcement
and Foreign Policy, a Report of  the Senate Committee on Foreign Relations,
Subcommittee on Terrorism, Narcotics and International Operations, 1989)
In Costa Rica, which served as the "Southern Front" for the contras
(Honduras being the Northern Front), there were several different ClA-contra
networks involved in drug trafficking. In addition to those servicing the
Meneses-Blandon operation detailed by the Mercury News, and Noriega's
operation, there was CIA operative John Hull, whose farms along Costa Rica's
border with Nicaragua were the main staging area for the contras. Hull and
other ClA-connected contra supporters and pilots teamed up with George
Morales, a major Miami-based Colombian drug trafficker who later admitted to
giving $3 million in cash and several planes to contra leaders. In 1989,
after the Costa Rica government indicted Hull for drug trafficking, a
DEA-hired plane clandestinely and illegally flew the CIA operative to Miami,
via Haiti. The US repeatedly thwarted Costa Rican efforts to extradite Hull
back to Costa Rica to stand trial.

Another Costa Rican-based drug ring involved a group of Cuban Amencans
whom the CIA had hired as military trainers for the contras. Many had long
been involved with the CIA and drug trafficking They used contra planes and a
Costa Rican-based shnmp company, which laundered money for the CIA, to move
cocaine to the U.S.

Costa Rica was not the only route. Guatemala, whose military intelligence
service -- closely associated with the CIA -- harbored many drug traffickers,
according to the DEA. It was another way station along the cocaine highway.
Additionally, the Medellin Cartel's Miami accountant, Ramon Milian Rodriguez,
testified that he funneled nearly $10 million to  Reagan's Nicaraguan contras through
long-time CIA operative Felix Rodriguez, who was based at Ilopango Air Force
Base in El Salvador.

The contras provided both protection and infrastructure (planes, pilots,
airstrips, warehouses, front companies and banks) to these ClA-linked drug
networks. At least four transport companies under investigation for drug
trafficking received US govemment contracts to carry non-lethal supplies to
the contras. Southern Air Transport, "formerly" ClA-owned, and later under
Pentagon contract, was involved in the drug running as well. Cocaine-laden
planes flew to Florida, Texas, Louisiana and other locations, including
several militarv bases Designated as 'Contra Craft,'' these shipments were
not to be inspected. When some authority wasn't clued in and made an arrest,
powerful strings were pulled on behalf of dropping the case, acquittal,
reduced sentence, or deportation.

1980s to early 1990s, AFGHANISTAN POPPY!
ClA-supported Moujahedeen rebels engaged heavily in drug trafficking while
fighting against the Soviet-supported govemment and  its plans to reform the
very backward Afghan  society. The Agency's principal client was  Gulbuddin
Hekmatyar, one of the leading druglords and leading heroin refiner. CIA
supplied trucks and mules, which had carried arms into Afghanistan, were used
to transport opium to laboratories along the Afghan Pakistan border. The
output provided up to one half of the heroin used annually in the United
States and three-quarters of that used in Western Europe. US officials
admitted in 1990 that they had failed to investigate or take action against
the drug operabon because of a desire not to offend their Pakistani and
Afghan allies. In 1993, an official of the DEA called Afghanistan the new
Colombia of the drug world.

MlD-1980s to early 199Os, HAITI
While working to keep key Haitian military and political leaders in power,
the CIA turned a blind eye to their clients' drug trafficking. In 1986, the
Agency added some more names to its payroll by creating a new Haitian
organization, the National Intelligence Service (SIN). SIN was purportedly
created to fight the cocaine trade, though SIN officers themselves engaged in
the trafficking, a trade aided and abetted by some of the Haitian military
and political leaders.

21st CENTURY. THE BIG ONE NOW IS MEXICO. Research might entail
why we sold the drug czars our guns. CIA/ DEA, at odds?

<=== PORTAL to 7,000 FREE CLASSROOMS, REPUBLISH ALL OR ANY, ATTRACT AD REVENUE to your site