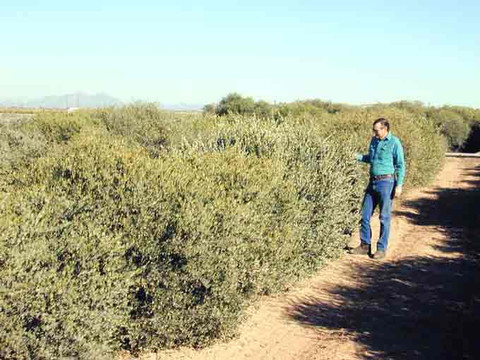 At the end of a road winding through Israel's Negev desert, the This is the entrance to Kibbutz Hatzerim which is flanked by jojoba shrubs jutting from the arid earth. The grove is the result of drip irrigation developed by Israeli engineer Simcha Blass in the 1960s that enabled the kibbutzniks to farm the desert. The company they started, Netafim Ltd., has sold the product in 110 countries from Germany to Peru. ``The founders were living in the middle of the desert and saw one agricultural failure after the other,'' Naty Barak, 64, a director at Netafim, said at the kibbutz visitors center. ``Back then it was their problem, but now it's a global necessity.'' It's the best skin lubricant out there, ditto machine lubricator. See:  JOJOBA MARKET STUDY

Today, some 300 Israeli companies make equipment to deliver water or purify it with lasers or diffusion, putting them in a position to profit as climate change, population growth and food shortages strain supplies. With agriculture accounting for about two-thirds of global water use, the Israeli government predicts overseas sales of the technology will top $10 billion by 2017.

As a result, the businesses are attracting investors. Amiad Filtration Systems Ltd., which helped manage sewage treatment at the Beijing Olympics, is up 49 percent in the past year in London, giving it a market value of about $75 million.

Deere & Co., the world's largest maker of tractors and combines, on June 5 agreed to buy Israel's Plastro Irrigation Systems Ltd., Netafim's main competitor in agricultural irrigation, for an undisclosed sum.
You might want to get into this business while it's red hot. See what the basics are:

``There is a growing lack of water in the world, and people are realizing now that it's an issue that's gaining momentum,'' said Nir Belzer, managing partner of Tel Aviv-based Gaon Agro Industries Ltd.'s $65 million clean-technology fund. ``In Israel, there's already a track record for water companies.''  (California, eyes open on this!)

Amiad, founded 45 years ago on a kibbutz, developed what it calls ``suction scanning,'' a new way of filtering pollutants from water. It has a contract to remove iron from drinking water in Ramenskoye, a town near Moscow.

Two-thirds of Israel is desert. In the Arava region, south of Hatzerim, the average annual rainfall is less than 50 millimeters (2 inches). Wastewater there is cleaned for drip irrigation to grow fruit and vegetables, 80 percent of which are exported to Europe, Barak said.

Israel's Water Authority started a countrywide campaign in July to conserve resources as the Sea of Galilee, the main source of drinking water, dries up.

``Israeli water-technology companies are dealing with a very conservative market that isn't always tempted to try the most innovative solutions,'' Distel said. ``Municipalities around the world are hesitant to try a new technology.''

With Netafim's system, farmers bury pipelines underground, allowing them to drip water and fertilizers directly onto the roots of their crops through devices that control the pressure and quality of the liquid.

The company expects to double sales within a few years, according to Chief Executive Officer Ofer Bloch. Sales increased 25 percent to $500 million in 2007.

``An amazing agronomic knowledge has developed in Israel in the past 40 years, which we are now selling to the world,'' Bloch, 48, said at his Tel Aviv office.

``We contacted Netafim because we weren't just looking for hose, plastic or dripper suppliers, we were looking for a partner in technology,'' Jose Chlimper, Agrokasa's chief, said by telephone from the company's base in Lima.

The global water industry, which includes waste treatment, valves, pumps, filtration and desalination equipment, is worth about $400 billion, according to Francesca McCann, an analyst at Stanford Group Co., a Washington-based research company.

``There was little incentive to conserve water, but now with rising commodity prices and the climate change, that will boost demand for more efficient technologies,'' McCann said.

The market will reach $537 billion by 2010, according to Israel's Ministry of Industry, Trade & Labor.

At Kibbutz Hatzerim, surrounded by grass and trees, Barak displayed the first adapted hose used on the site.

``About 60 years ago, there was nothing here, only a dry wasteland,'' said Barak, a kibbutznik for four decades. ``This was the start of the development of a serious industry.''

To contact the reporter on this story: Tal Barak in Tel Aviv at tbarak@bloomberg.net

The UN says there can't be global security without food security in dry
regions.

The United Nations says drought could strike 70 percent of the planet by
2025, unless countries take due measure to stop or slow the global
desertification.

"If we cannot find a solution to this problem... in 2025, close to 70 percent
could be affected," said Luc Gnacadja, executive secretary of the United
Nations Convention to Combat Desertification, quoted by AFP Friday.

Presently, at least 41 percent of the globe suffers from a malignant drought,
and the environmental degradation has bode for its growth pace of around 15
to 25 percent since 1990, reveals a global climate report.

"There will not be global security without food security" in dry regions,
Gnacadja said at the start of the ninth UN conference on the convention in the
Argentine capital.

"A green deal is necessary" for developing countries working to combat
drought, he stressed.

The world's richest countries with high carbon dioxide emissions are mainly
responsible for the global warming.

While the industrialized nations spend billions each year to limit their own risks
from the dire consequences of the environmental degradation, including
drought and rising seas, they do little to help poor nations counter the grim
consequences of environmental change.

Climate change is likely to diminish already scarce water supplies in the Western U.S., exacerbating problems for millions of users, according to a new government report.

A report released Monday by the Interior Department said annual flows in three prominent river basins - the Colorado, Rio Grande and San Joaquin - could decline by as much 8 percent to 14 percent over the next four decades. The three rivers provide water to California and seven other states, from Wyoming to Texas as well as to parts of Mexico.

Interior Secretary Ken Salazar called water the region's "lifeblood" and said small changes in snowpack and rainfall levels could have a major effect on tens of millions of people.

The wide-ranging impact was demonstrated when California issued its first-ever proclamation of emergency for drought because of scarce precipitation in 2007-09. California receives much of its water from the Sierra snowpack, supplemented by Colorado River and groundwater supplies.

The state curtailed water deliveries to its vital agricultural regions while local governments around California imposed lawn-watering and other restrictions.

Even after Gov. Jerry Brown last month declared an official end to the drought emergency, (Huge rainfall this winter,) he and other officials urged Californians to continue their conservation efforts.

Salazar said the new report will help officials understand the long-term effects of climate change on Western water supplies, and will be the foundation for efforts to develop strategies for sustainable water resource management.

The report notes that projected changes in temperature and precipitation are likely to alter the timing and quantity of stream flows in all Western river basins, with increased flooding possible in the winter due to early snowmelt and water shortages in the summer due to reductions in spring and summer runoffs.

Changes in climate could affect water supplies to a range of users, from farms and cities to hydropower plants, fish, wildlife and recreation, the report said.

Western states are growing faster than the rest of the country, with some of the fastest growth occurring in the driest areas, such as Nevada, Arizona and Texas.

"Impacts to water are on the leading edge of global climate change," said Mike Connor, commissioner of the Bureau of Reclamation, an Interior Department agency that provides water to more than 31 million people in 17 Western states and power to 3.5 million homes.

The report "affirms the urgency of the planning we are engaged in," Connor said at a news conference Monday. "We need to take actions now to plan" for changes that are likely to occur over the next several decades.

The report addresses the expected impact of climate change on eight major river basins in the central and Western United States. Besides the Colorado, Rio Grande and San Joaquin, the report also looks at the Columbia, Klamath and Sacramento rivers on the West Coast; the Missouri River Basin in the Northwest and Great Plains; and the Truckee River Basin in California and Nevada.

Reductions in spring and summer runoffs could lead to a drop in water supply in six of the eight basins, the report said. Due to early snowmelt and relatively higher winter rains from warmer conditions, all but the Colorado basin could become more vulnerable to floods, the report said.

Aiguo Dai, a climate scientist with the National Center for Atmospheric Research in Boulder, Colo., said the report echoes predictions he and other researchers have made that climate change would reduce stream flow rates in Western U.S. rivers. But he said computer models used to assess global trends would not be helpful for small river basins such as the Klamath or Upper Rio Grande.

Sen. Jeff Bingaman, D-N.M., said the report did "a solid job" cataloguing Interior's efforts to respond to climate change. Bingaman, chairman of the Senate Energy and Natural Resources Committee, sponsored a 2009 law that aims to improve water management in the West and increase analysis of water-related data. The report released Monday was prepared in response to the Secure Water Act.